Dec 19, 2017 11:36 PM PHT
Agence France-Presse
Facebook Twitter Copy URL
Copied
The trip to Egypt and Israel was pushed back to mid-January, allowing Pence to remain in Washington in case he needs to cast the deciding vote in the Senate over President Donald Trump's tax reforms 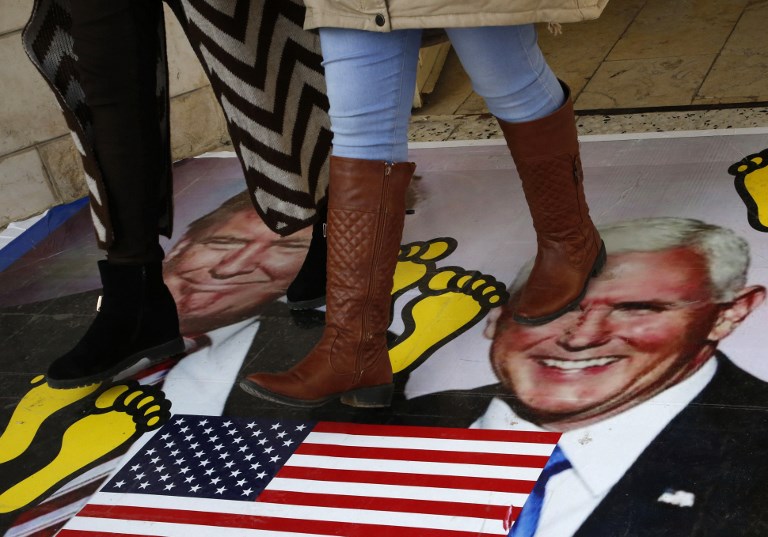 WASHINGTON, USA – US Vice President Mike Pence has delayed a visit to the Middle East, the White House said Monday, December 18, as a crunch tax vote on Capitol Hill looms and anger in the region over Washington’s policy shift on Jerusalem persists.

The trip to Egypt and Israel, due to begin Tuesday, December 19, has been pushed back to mid-January, allowing Pence to remain in Washington in case he needs to cast the deciding vote in the Senate over President Donald Trump’s tax reforms.

“The tax vote is still in very good shape, but we don’t want to take any chances whatsoever,” said a senior administration official.

Senator John McCain’s return home to Arizona to fight cancer has left Republicans with a razor-thin margin to push the legislation over the finishing line.

Having failed to clear a series of legislative hurdles, the package is seen as key to Trump’s ability to secure support among his base and skittish political donors.

“We have some senators who obviously can’t make it there for the vote and the vice president feels that it’s important for him to be here for the largest tax cut in history,” the official said.

The House of Representatives is expected to vote on the package on Tuesday with the Senate vote to follow late Tuesday or early Wednesday.

‘All about’ tax cuts

Officials denied that Pence’s decision was motivated by a wave of deadly protests in the wake of Trump’s controversial decision to declare Jerusalem as Israel’s capital.

“This is all about the largest tax cut in American history and having the vice president and the full team here,” the official said.

“It’s an odd case to make given we are going to be there in two or three weeks,” a second senior White House official said, slapping down suggestions of a delay.

Breaking with decades of US policy, Trump also said on December 6 that he would move the US embassy from Tel Aviv to Jerusalem.

Aside from the protests, Palestinian, Muslim and Coptic leaders had cancelled meetings with the vice president, who had already trimmed the trip by three days.

Palestinian president Mahmud Abbas’s Fatah faction had called for a massive demonstration to coincide with Pence’s visit and ruled out meeting him in Ramallah or Bethlehem.

The fallout continued Monday as the United States was forced to veto a draft UN resolution rejecting Trump’s Jerusalem move, after all 14 other Security Council members – including allies like Britain – voted for the measure.

The text was introduced by Egypt, where Pence had been scheduled to arrive Wednesday for talks with President Abdel Fattah al-Sisi.

“Now were are going to look at January and the trip may even be a little bigger. We’ll obviously still go to Egypt and Israel, but we may add additional countries,” the official said. – Rappler.com