Nov 5, 2018 3:34 PM PHT
Agence France-Presse
Facebook Twitter Copy URL
Copied
'I announce that we will proudly bypass your illegal, unjust sanctions because it's against international regulations,' Rouhani says in a televised speech. 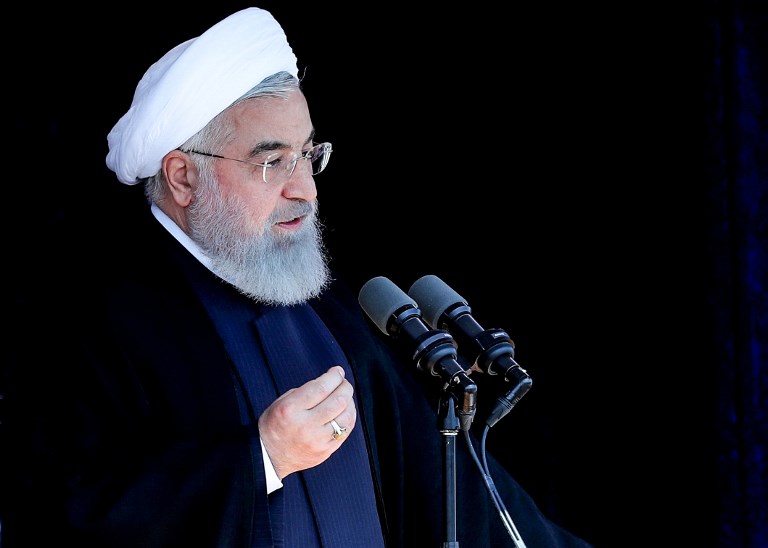 “I announce that we will proudly bypass your illegal, unjust sanctions because it’s against international regulations,” Rouhani said in a televised speech.

“We are in a situation of economic war, confronting a bullying power. I don’t think that in the history of America, someone has entered the White House who is so against law and international conventions,” he added.

The measures described by Washington as “the toughest sanctions ever” follow US President Donald Trump’s controversial decision in May to abandon the multi-nation nuclear deal with Tehran.

The latest tranche aim to significantly cut Iran’s oil exports – which have already fallen by around one million barrels a day since May – and cut it off from international finance.

The United States has given temporary exemptions to 8 countries – including India, Japan and Turkey – to continue buying oil in a bid to avoid disturbing their economies and global markets.

But US Secretary of State Mike Pompeo vowed to push Iran’s oil sales to zero.

“Watch what we do. Watch as we’ve already taken more crude oil off the market than any time in previous history,” he told CBS’s “Face the Nation” on Sunday.

Trump’s administration says it wants a new deal with Iran that curbs its interventions around the Middle East and missile program – demands that have been flatly rejected by Tehran.

“Constantly they are sending us messages saying ‘Let’s sit and negotiate.’ Negotiations for what?” said Rouhani.

“First, you respect the negotiations we already concluded, so that there are grounds for the next negotiations.”

‘Act on your commitments’

Rouhani said 4 countries had approached him during his visit to New York for the UN General Assembly in September, offering to mediate with the US but he turned them down.

Iran’s economy was already suffering from major structural problems – including major banking issues – before Trump walked out of the nuclear deal.

But Trump’s announcement in May helped fuel a run on Iran’s currency that has seen the rial lose more than two thirds of its value, driving up prices and forcing the government to resort to food handouts for the country’s poor.

Rouhani came to power in 2013, vowing to rebuild ties with the world and attract billions of dollars in foreign investment.

The other parties to the nuclear deal – Britain, France, Germany, China and Russia – have all vehemently opposed the US move and vowed to keep trade going, though they are struggling to convince private companies to stand up to US pressure.

Most of the international firms who lined up to work in Iran after the 2015 deal have been forced to leave, including France’s Total, Peugeot and Renault, and Germany’s Siemens.