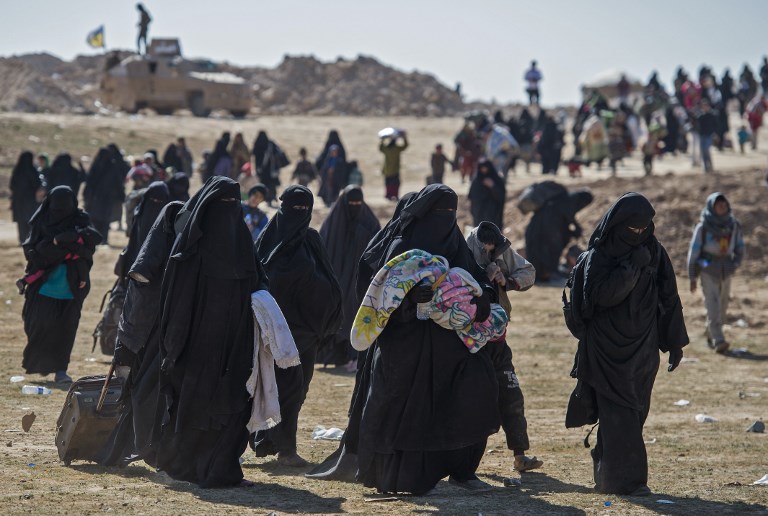 NEAR BAGHOUZ, Syria – Jihadist fighters made a desperate last stand in eastern Syria on Wednesday, February 13, while their wives and children fled the final, blood-soaked implosion of the Islamic State group’s (IS, formerly known as ISIS or the Islamic State in Syria and Iraq) “caliphate.”

The US-backed Syrian Democratic Forces on Saturday, February 9, launched a final push to expel ISIS fighters from the sole remaining morsel of the proto-state they declared in 2014 across parts of Syria and Iraq.

Thousands of people have flooded out of the so-called “Baghouz pocket” near the Iraqi border in recent days – mostly women and children, but also suspected jihadists.

Several dozen people fled Baghouz on Wednesday afternoon, walking to an SDF-held position 4 kilometers (two miles) away from the village.

As they approached, the SDF rushed down to filter out the men. They separated 15, all with long beards, and took them one by one behind a rock to search them.

Afterwards, they loaded them into a truck to take them to a gathering point where coalition troops were present.

In an open field serving as the main civilian reception location, about 300 women and children, almost all of them Iraqi, sat in small groups.

After fleeing Baghouz on foot on Tuesday afternoon, February 12, most had spent the night out in the open.

“I tried to go get a blanket for my kids but there weren’t enough,” said Umm Ayham, a young Syrian woman from the northern province of Raqa.

“Some people had lit a fire, burning plastic they found on the ground and baby diapers, so I went by it to get warm.”

Hundreds of people fled the ISIS holdout in the night of Tuesday to Wednesday, SDF spokesman Mustefa Bali said.

Inside on Wednesday, the Kurdish-led SDF fighters were advancing slowly against hundreds of jihadists.

“We have retaken positions lost in a counterattack launched two days ago by ISIS. We have progressed and taken new positions,” Bali said.

“There are mines throughout the sector,” said Rami Abdel Rahman, the head of the Britain-based war monitor.

“The SDF are firing rockets,” he said, and both sides were locked in heavy clashes on the edges of Baghouz village.

Since December, more than 38,000 people, mostly wives and children of ISIS fighters, have fled into SDF-held areas, the Observatory says.

That figure includes around 3,500 suspected jihadists detained by the SDF, according to the monitor.

About 5 waited in line to be patted down, including one man in a rickety wheelchair.

A coalition force member led one of the younger men to a subsequent point for a retina scan.

Further on, those that had been searched were kneeling on the ground with coalition troops circling around them.

The alliance launched a military offensive to expel ISIS from the eastern banks of the Euphrates in the oil-rich province of Deir Ezzor in September.

Since then, more than 1,300 jihadists as well as 650 SDF fighters have been killed, while more than 400 civilians have lost their lives, the Observatory says.

SDF spokesman Bali said at the weekend that up to 600 jihadists could remain inside the pocket, most of them foreigners.

US President Donald Trump on Monday, February 11, said the coalition may declare victory over ISIS in Syria within days.

A victory in Baghouz would allow the United States to withdraw all its 2,000 troops from Syria, as announced by Trump in December.

The pullout announcement shocked Washington’s allies, as well as US military commanders.

In a report last week, the US Department of Defense warned that without sustained counterterrorism pressure, ISIS could resurge within months.

Syria’s Kurds hold hundreds of suspected foreign ISIS fighters and have long urged their home countries to take them back, but these have been reluctant.

Acting Pentagon chief Patrick Shanahan on Tuesday made an unannounced visit to Baghdad.

A senior Pentagon official told reporters travelling with Shanahan that Washington was pressing its allies to repatriate their nationals.

“We think coalition members need to take responsibility for their citizens who are fighters. It’s been a message we’ve delivered time and time again. And we are seeing hopeful progress,” he said.

Syria’s civil war has killed 360,000 people since it started in 2011 with the brutal repression of anti-government protests.

It has since spiralled into a complex conflict involving world powers and jihadists. – Rappler.com