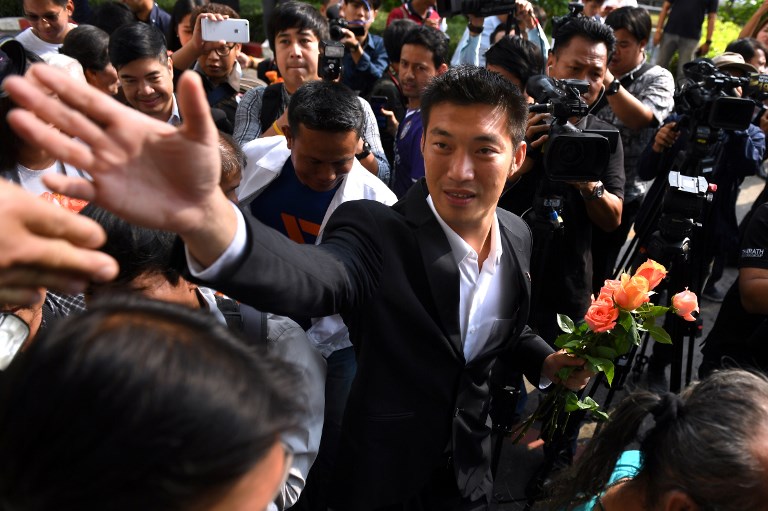 BANGKOK, Thailand – A 40-year-old tycoon who has become the darling of Thai millennials thanks to his sharp social media messaging on Wednesday, February 27,  decried efforts to “kick out his legs”, as his upstart pro-democracy party soars in profile ahead of next month’s election.

Thanathorn Juangroongruangkit, the scion of a billionaire auto-parts maker, is the charismatic frontman of Future Forward, a new party targeting the urban youth vote with a staunchly anti-junta platform.

He has disrupted the Thai political scene, offering a fresh option to the long-standing binary political choice between a royalist, military-aligned bloc or the populist parties of billionaire ex-premier Thaksin Shinawatra.

Thanathorn has drawn an adoring social media following, mainly among young, first-time voters, who appear enamored as much by his good looks as his policies, dubbing him “Daddy” in a reference to a soap opera character.

But legal troubles have come in lock-step with popularity.

On Wednesday he appeared at the prosecutor’s office over a case brought by the junta under Thailand’s hardline Computer Crimes Act.

He and two other party officials could face 5 years in jail if convicted of spreading false information about the junta in a Facebook live broadcast last year.

“I think people understand that as the popularity of Future Forward rises … there are efforts to kick out my legs. But we will keep moving forward.”

Prosecutors will again meet on March 26, for further consideration on whether to indict.

Thanathorn later took to Twitter, warning his 182,000 followers “this is not the last hurdle that will obstruct us”.

Future Forward are running candidates in every constituency.

They are eying a possible king-making role in a pro-democracy coalition if elections fail to deliver an outright winner.

Thanathorn has riled the junta with his withering criticism of military spending and the country’s lurch into authoritarianism since then-Army Chief Prayut Chan-O-Cha seized power in 2014.

Prayut wants to return as civilian leader after elections on March 24. Critics say he has loaded Thailand’s politics in his favor, with the senate set to be appointed by his number two.

The gruff retired general this week turned down the chance to join television debates, but insisted he was “not afraid” of public discourse.

Thanathorn has shone in debates so far, skewering the military, vowing to end conscription and to tackle Thailand’s economic inequality.

He has also irked the Thaksin camp, whose parties have won every Thai election since 2001, vowing not to become supplicant to the Shinawatra political machine.

“This election will be the first time I vote,” said a 23-year-old supporter at court on Wednesday, who gave her name only as Ham.

“Thanatorn is smart, he speaks clearly and makes everything easy for us to understand.”

But Future Forward has also been criticized for its focus on Bangkok and being led by children of the elite. – Rappler.com