WATCH: How a Chinese ship sank a Vietnamese boat in 2014 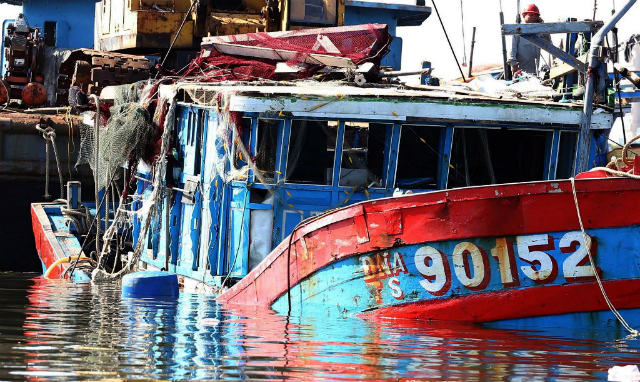 MANILA, Philippines – The sinking of a Filipino fishing boat by a Chinese ship in the West Philippine Sea (South China Sea) evoked memories of a similar incident involving a Vietnamese boat in 2014.

On May 26, 2014, a large Chinese ship chased and rammed a Vietnamese fishing boat near an oil rig close to the disputed Paracel Islands in the South China Sea. (The Philippines is not a claimant of the Paracels.)

Nearby vessels rescued the 10 fishermen onboard the rammed fishing boat.

Video of the incident was shot from a nearby Vietnamese vessel, and was released on June 5, 2014.

Vietnam condemned this “inhuman act.” A local shipbuilding expert, who inspected the vessel, said the scale of the damage showed “the attack is an intentional act that was aimed at killing Vietnamese fishermen.”

The sinking of Filipino vessel F/B Gem-Ver in Recto Bank (Reed Bank) in the West Philippine Sea, on the other hand, “is the first time that a Chinese maritime militia vessel has rammed a Filipino fishing vessel,” according to Carpio.

The Chinese ship Yuemaobinyu 42212 rammed, sank, and abandoned the distressed fishermen of F/B Gem-Ver in Recto Bank on June 9, fueling outrage among Filipinos but prompting a conservative response from Malacañang and the Department of Foreign Affairs. (READ: Locsin questions U.S., excuses China over Philippine boat)

Recto Bank is an underwater coral formation that is rich in fish and is said to contain huge reserves of oil and natural gas. It is coveted by China, but belongs to the Philippines based on a 2016 international ruling.