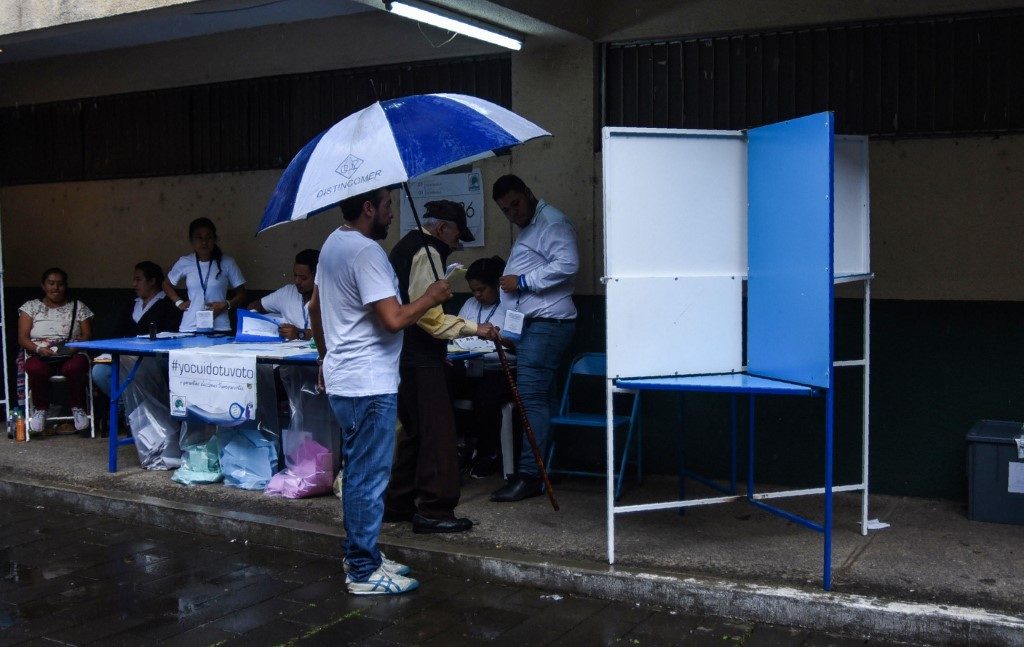 Facebook Twitter Copy URL
Copied
Eight million Guatemalans are eligible to vote for president as well as in congressional and municipal elections, while 40,00 police are mobilized to provide security

GUATEMALA CITY, Guatemala – Corruption-weary Guatemalans voted on Sunday, June 16, to elect a new president after a tumultuous campaign that saw two leading candidates barred from taking part and the top electoral crimes prosecutor forced to flee the country, fearing for his life.

The Supreme Court opened voting at 7:00 am (1300 GMT) in Guatemala, where a crowded field of 19 candidates is vying to succeed unpopular outgoing president Jimmy Morales.

Eight million Guatemalans were eligible to vote for president as well as in congressional and municipal elections, while 40,00 police were mobilized to provide security.

Voting took place calmly throughout the country except in one municipality in the east of the country where drug traffickers are particularly active, in which it had to be suspended due to death threats made against electoral authorities, Interior Minister Enrique Degenhart said.

Local television images showed dozens of Guatemalans queuing in the capital to vote.

It was a similar scene in the interior, largely inhabited by indigenous peoples who make up 42 percent of the 17.7 million population but where 80 percent live in poverty. They have until 6:00 pm before polls close.

Gang violence, poverty and news of the streams of US-bound migrants have dominated campaigning in Central America’s most populous country.

The country’s top anti-corruption campaigner, former attorney general Thelma Aldana, is not among the candidates. She was expected to poll strongly, but was barred from running last month over allegations of irregularities dating from when she was a barnstorming public prosecutor.

Sandra Torres, a 63-year-old businesswoman and former first lady, heads into the election as the favorite, having built a clear opinion-poll lead over second placed Alejandro Giammattei, also 63.

Torres – candidate for the center-left Unity of Hope party (UNE) – has over 22% of voter preferences in the latest polls, while Giammattei, a doctor running for the conservative Vamos party, trails with just over 11%.

However, neither is seen as likely to poll strongly enough on Sunday to avoid a runoff round on August 11.

Analysts believe Torres, a polarizing figure since her years as the Central American country’s first lady, would struggle in a second round, given Giammattei’s ability to unify the conservative vote against her.

Three other candidates are vying for third place, with indigenous candidate Thelma Cabrera building momentum in the closing stages of the campaign.

Torres’s UNE is expected to poll strongly but fall short of a majority in the deeply fractured 160-seat Congress.

The ex-wife of former president Alvaro Colom, in power from 2008-2012, Torres has pledged health and education reforms as well as jobs to stem the flow of migrants to the US. She has vowed to oppose abortion and same-sex marriage.

Giammattei has vowed to bring back the death penalty to help crush violent gangs, fight poverty to stop migration and end “disgusting” corruption.

All police leave has been canceled while the military has been mobilized to guard key buildings and jails.

Authorities have expressed concern about possible outbreaks of violence in at least 55 municipalities.

Guatemala has one of the world’s highest homicide rates: official statistics put the rate at 22.4 murders per 100,000 people at the end of 2018.

Around half the killings are blamed on drug trafficking and extortion operations carried out by powerful gangs.

Morales, a former TV comedian who won office in 2015 – beating Torres in the run-off – is obliged to step down under Guatemala’s one-term rules.

His predecessor Otto Perez is in jail for corruption and he himself faces a corruption inquiry into illegal campaign funding.

That was instigated by Aldana and the UN-backed International Commission Against Impunity in Guatemala (CICIG), which has put former presidents, ministers and business moguls in jail.

Aldana – who fled to the United States after receiving death threats – told AFP her exclusion was orchestrated by those she put in prison and their allies, who saw her as a “hindrance.”

Also barred from running was Zury Rios, daughter of late dictator Efrain Rios Montt, under constitutional rules that prevent his relatives from seeking the presidency.

And this week, as polling stations were being prepared across the country, Oscar Schaad, the electoral court’s top prosecutor, said he had been forced to flee the country, citing threats to him and his family.

Tough-talking Arzu warned criminal gangs he would leave no stone unturned in a quest to hunt them down if he is elected. Then he would give them a choice, he said: “Surrender or die on the spot.” – Rappler.com