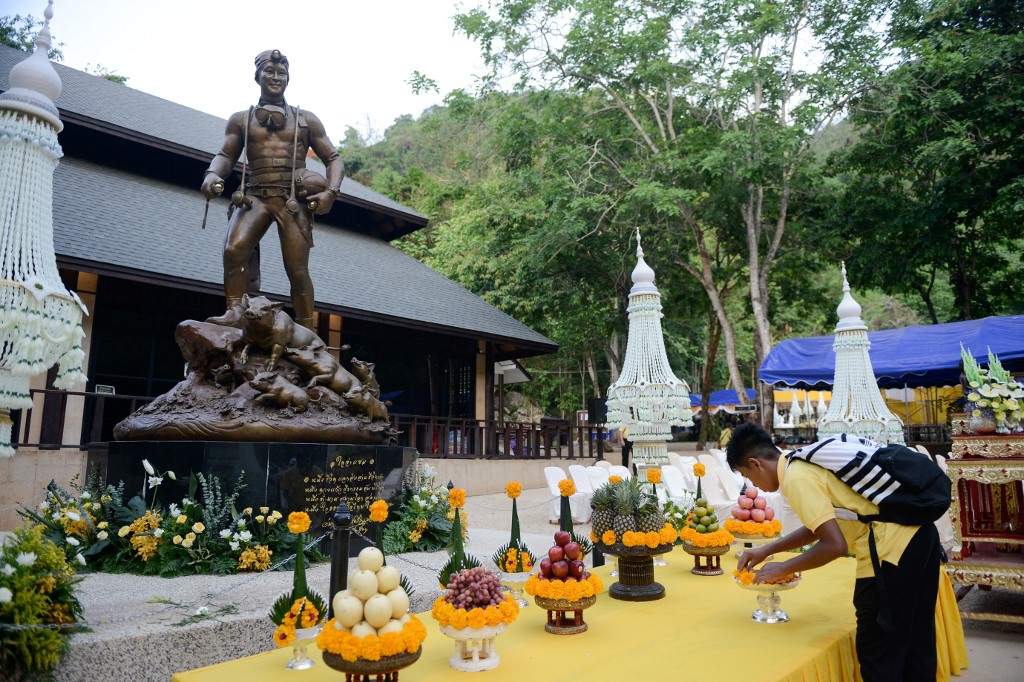 MAE SAI, Thailand – The “Wild Boars” youth football team, whose plight captivated the world a year ago when they were trapped for nearly 3 weeks in a flooded Thai cave, paid their respects Monday, June 24, to a diver who died trying to save them.

During their rescue, the 12 boys and their coach were fitted-out in full-face breathing masks and sedated before being pulled to safety through a hazardous underwater labyrinth.

Thai Navy SEAL diver Saman Gunan died during the operation, the only fatality of the three-week ordeal at the Tham Luang cave in northern Thailand.

On Monday the boys gave alms to Buddhist monks at a ceremony in Gunan’s honor, also offering a feast to cave spirits.

Adul Sam-on, aged 14 at the time of the cave drama, described Saman as “a second father to us”.

“The incident is in my mind every day.”

Saman Gunan’s widow broke down in tears as her husband’s heroism was remembered.

“I want to tell [Saman] not to worry, I will be strong and look after myself and the family and parents always,” Valepon Gunan said.

The day’s events marked a solemn end to a weekend marking the first anniversary of the saga.

On Sunday the team joined a charity race of 5,000 joggers and cyclists – many in fancy dress – on a course that took them past a statue of Gunan.

The cave entrance has been transformed into a shrine to last year’s events for the droves of selfie-snapping tourists, both local and foreign, who now visit the site.

The team became global celebrities and have since toured the world, meeting footballing giants at Manchester United and LA Galaxy, headlining Ellen Degeneres’s US talk show, and signing a film deal with Netflix.

Exclusivity contracts mean they are no longer free to speak to the press.

Three of the team and their coach, Ekkapol Chantawong, were stateless at the time of the incident, but have all been granted Thai citizenship.

One of the boys to receive a passport for the first time was Adul, now 15, who shot to fame after thanking in English the British divers who found the group nine days after they went missing.

The boys are still avid footballers, and the coach has been able to realize his dream of running his own football academy. – Rappler.com