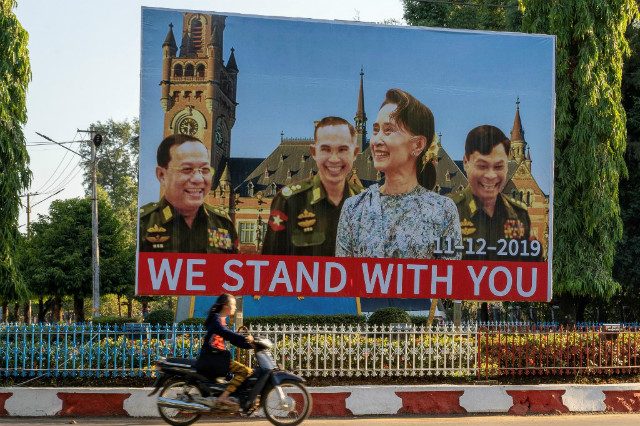 NAYPYIDAW, Myanmar – Thousands rallied in support of Aung San Suu Kyi in Myanmar Saturday, December 7, on the eve of her departure for the UN’s top court to defend Myanmar against charges of genocide against Rohingya Muslims.

The raucous rally in the capital Naypyidaw came as China’s foreign minister arrived for a visit at Suu Kyi’s invitation.

Analysts say Beijing’s permanent seat on the UN Security Council – and its veto vote – makes it a valuable ally as Myanmar faces intensifying scrutiny over its treatment of the Rohingya.

But domestically “The Lady” remains revered, and the resolve of her supporters has only hardened in the lead-up to the ICJ hearing scheduled for December 10-12.

“We are proud of her taking accountability… by going to The Hague to protect the nation’s image,” shouted prominent writer Htin Lin Oo into a microphone in front of a banner emblazoned with the words “We stand with our leader”.

“Our blood shall come together and unite us when it is important,” he shouted to a cheering crowd, who hoisted colourful artwork of Suu Kyi in the air.

The ICJ lawsuit was brought by Gambia, a tiny, mainly Muslim West African state that alleges Myanmar breached the UN’s Genocide Convention with its bloody 2017 crackdown on the Rohingya. (READ: 200,000 Rohingya rally to mark ‘Genocide Day’ in Bangladesh camps)

Some 740,000 Rohingya fled into neighbouring Bangladesh, bringing with them accounts of widespread murder, rape and arson – violence that UN investigators have branded as genocide.

But the Rohingya garner little sympathy within Myanmar, with many believing that they are illegal immigrants from Bangladesh.

Myanmar insists abuse allegations are under investigation by its own committees – panels which rights groups say have whitewashed the atrocities.

The military says the operations were justified to flush out Rohingya militants.

Win Swe, a Naypyidaw resident at the rally who was sporting a T-shirt with Suu Kyi’s face on it, told Agence France-Presse he will support his leader in “whatever she does”.

“They aren’t just accusing one person in Myanmar, they are accusing the whole country,” he said. – Rappler.com