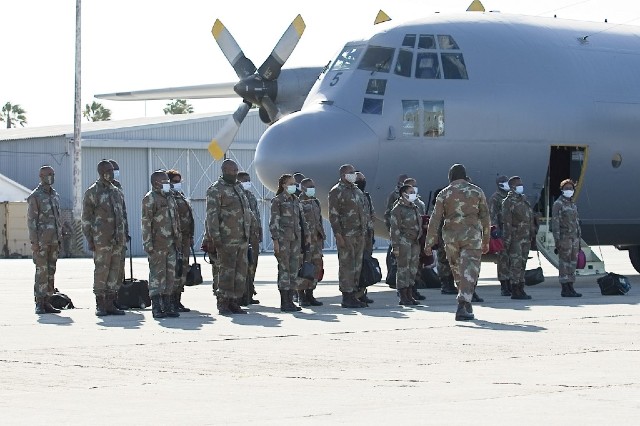 PORT ELIZABETH, South Africa – Dozens of military medics were deployed on Sunday, July 5, to help combat the coronavirus pandemic in South Africa’s third most affected province, where there has been a surge in infections.

The deployment to East Cape province comes a day after South Africa recorded more than 10,800 new COVID-19 cases, its biggest single-day jump during the pandemic, taking the cumulative infections to 187,977.

Forty-seven defence force medical personnel landed in Eastern Cape city of Port Elizabeth to help shore up the health service, which is buckling under rising number of cases.

“The province is not coping. They have personnel and equipment problems,” defense force spokesman Thabo Sello, told Agence France-Presse.

“The situation in the Eastern Cape is really bad with infections increasing and spreading rapidly,” he said of the province, which accounts for more than 18 percent of national infections.

“When the nation calls us, we have to respond, and respond quickly,” said the military medical services chief, Lieutenant-General Zola Dabula, at a ceremony welcoming the team.

He expressed concern that people were not taking this pandemic “seriously”.

“So our duty as the army medical personnel is not only to treat people, but also to educate them about this virus,” he said.

The province already has some of the more than 200 Cuban medical personnel who arrived in South African last month.

East Cape is one of the country’s hot spot provinces after Gauteng, which houses Johannesburg, the country’s largest city, and the capital Pretoria.

South Africa has imposed some of the strictest stay-at-home measures in the world since March 27 in a bid to limit the spread of COVID-19.

Nevertheless, the number of infections is rising daily by the thousands as the lockdown rules are gradually eased. – Rappler.com