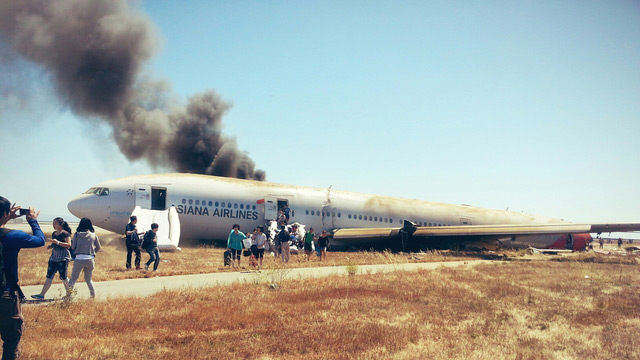 Chinese nationals made up 141 of the 291 passengers aboard the Asiana Airlines Boeing 777 which burst into flames after it landed short of the runway, injuring 182.

The two girls were middle school students from east China’s Zhejiang province according to a preliminary report, state news agency Xinhua reported. Earlier, state broadcaster CCTV said they were born in 1996 and 1997.

The report quoted Asiana Airlines as saying the information was based on their boarding passes but their identities have not yet been confirmed by DNA testing.

It added the two were among a group of 30 students who were flying to the United States along with their teachers to take part in a summer camp.

As of Sunday afternoon, the Chinese consulate in San Francisco had confirmed the safety of 70 Chinese nationals and posted their names on its website.

CCTV urged survivors and their loved ones to post information on the online messaging system We Chat so they could find one another.

Social media users mourned the two girls killed on board.

“In a country of families with mostly single children, how can the parents take this?” wrote one on the Chinese microblog Sina Weibo, referring to China’s population-control policy limiting most families to one child.

“Life is supposed to have just started for them,” said another user. “Who knew the journey to the dream would become their last trip?”

Among the survivors were 60 students and several teachers travelling in two groups, with a few suffering injuries and one student unaccounted for, CCTV reported.

“When the crash happened we felt we were done for. Equipment and everything was falling on our heads,” a teacher from the northern province of Shanxi told CCTV.

But “none of us were seriously injured”.

Xu Da, a Chinese passenger on board the plane — which originated in Shanghai and picked up passengers in South Korea before heading to the United States — described the dramatic incident to CCTV.

He added: “I felt a shock. The oxygen masks fell down and a bad smell began to spread throughout the plane. I could also see sparks in the front part of the plane.”

Once the plane landed the cabin was a “mess”, the back of the aircraft had a large hole and the kitchen there had disappeared, he said on Sina Weibo.

A student passenger surnamed Lin described darkness after the crash.

“There was dust everywhere and it was very dark. The air smelled horrible. Foam was gushing in and outside the jet,” he told the microblog service Tencent Weibo.

“To be honest the first thing I thought about was to look for my glasses.”

Xu and his wife quickly collected their belongings and rushed out the makeshift exit at the back.