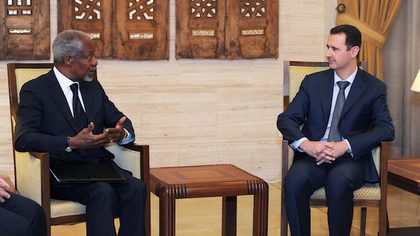 Annan said Syria had agreed to “immediately” start pulling troops out of protest cities and complete a troop and heavy weapon withdrawal by April 10, US ambassador Susan Rice said after Annan briefed the UN Security Council.

The news came as Red Cross chief Jakob Kellenberger launched a fresh mission to Syria — his third since last year, when Damascus launched a crackdown on anti-government protests which the UN says has left more than 9,000 dead.

Syria’s UN envoy, Bashar Jaafari, confirmed the April 10 date had been agreed “by common accord” between Annan and his government.

Annan — who briefed the 15-member Security Council by videoconference from Geneva — however said that “no progress” had been made on reaching a ceasefire, diplomats said.

Rice said the United States and other countries doubted that Assad would carry out the new commitments.

“Past experience would lead us to be skeptical and to worry that over the next several days, that rather than a diminution of the violence we might yet again see an escalation of the violence. We certainly hope that is not so,” Rice said.

The partial implementation of Annan’s six-point peace plan would include a full cessation of hostilities within 48 hours of the deadline, diplomats said.

Besides a humanitarian ceasefire, Annan’s plan also calls for an inclusive Syrian-led political process, the right to demonstrate, and the release of people detained arbitrarily.

“We all want to see this happen immediately,” she told reporters, as she repeated Rice’s skepticism to “judge him (Assad) by his actions” on whether the plan holds.

The former UN chief said the Security Council had to start considering the deployment of an observer mission with a broad mandate to monitor events in Syria.

The Britain-based Syrian Observatory of Human Rights said Monday that 10,108 people have been killed since the uprising, inspired by Arab Spring protests that toppled long-time dictators in Tunisia and Egypt, erupted in March 2011.

The group said at least 34 people, including 16 civilians, were killed Monday as Syrian forces pressed their crackdown on dissent, pounding rebel bastions and clashing with insurgents near the Turkish border.

Russia has rejected the idea of a deadline for implementation of the peace plan, with Foreign Minister Sergei Lavrov saying “ultimatums and artificial deadlines rarely help matters.”

Moscow, a Soviet-era ally of the Assad regime, said only the UN Security Council, where it wields veto power, could put any time restrictions on Syria’s compliance with the Annan plan.

Diplomats said Monday that the United States, Britain and France were working on a Council statement putting a formal stamp on the April 10 deadline.

The statement — a draft of which will be sent to Council members on Tuesday — would warn Assad of possible “further measures” if he reneges on the promise made to Annan, one UN diplomat told AFP.

Kellenberger, the president of the International Committee of the Red Cross (ICRC), said he would meet officials including Syrian Foreign Minister Walid Muallem and examine measures for a two-hour humanitarian ceasefire — also a condition set out in the Annan plan.

“I am determined to see the ICRC and the Syrian Arab Red Crescent expand their presence, range and scope of activities to address the needs of vulnerable people,” he said in a statement ahead of his two-day trip to Syria.

The Syrian Observatory of Human Rights has charged that the army is torching and looting rebel houses across the country in a deliberate campaign that could amount to crimes against humanity.

But in Istanbul on Sunday, the so-called Friends of Syria group — Arab League members and nations including the United States, France and Germany — steered clear of backing opposition appeals for arms.

The Syrian National Council, the main opposition group in exile funded by Gulf Arab states, said it would pay the salaries of rebel fighters seeking to oust Assad.

The US State Department also said Monday it would offer an initial $1.25 million to fund a new initiative announced by Secretary of State Hillary Clinton to train Syrian investigators and document alleged abuses.

The project, said Nuland, would be primarily aimed at “regime elements who are continuing not only to obey the Assad orders to fire on their own people, but are also committing gross abuses themselves.”

Official Syrian media mocked the Sunday meeting, with the Al-Baath newspaper, mouthpiece of Assad’s ruling party of the same name, saying the gathering of what it called the “Enemies of Syria” was a failure. – Tim Witcher, Agence France-Presse