Jul 14, 2013 6:54 PM PHT
Agence France-Presse
Facebook Twitter Copy URL
Copied
The driver, who has not been officially named, is an Armenian citizen who had been repeatedly warned this year for traffic violations. 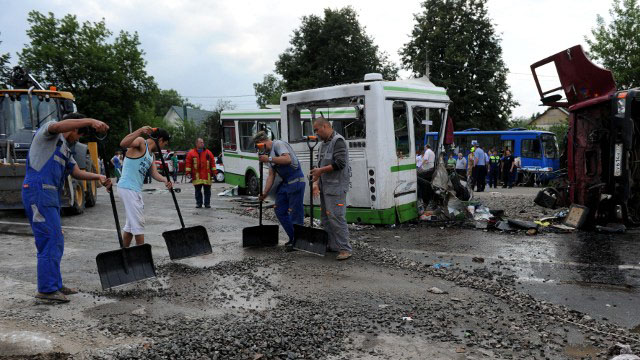 MOSCOW, Russia – Russian police on Sunday, July 14, arrested the hospitalised driver of a truck that ploughed into a packed passenger bus outside Moscow killing 18 people and injuring dozens more.

Officials said the injuries were particularly severe from Saturday’s accident as the truck was carrying gravel which poured onto the passengers in the bus and then covered the roadside.

“The man (the truck driver) has been placed under arrest for 48 hours and is being interrogated,” Moscow police said in a statement.

The driver, who has not been officially named, is an Armenian citizen who had been repeatedly warned this year for traffic violations.

Investigators have opened a criminal probe against him under an article of causing multiple death through violating traffic rules, which carries a maximum of seven years in prison, police said.

Police said investigators would now go to court with a request for the man to be placed in detention ahead of trial.

The man was brought out of an artificial coma in which he was placed for a day after the crash and is being interrogated by investigators at his hospital bed.

The chief investigator for Moscow police Alexei Kuznetsov told the ITAR-TASS agency that the driver had only an Armenian licence and no valid Russian permit.

The accident Saturday afternoon was one of the deadliest road tragedies in Moscow, whose traffic-clogged roads have become ever more dangerous in recent years.

According to preliminary information, the truck hit the bus after it turned onto a main road, smashing the bus into two with the force of the crash.

The bus was taking some 40 passengers on a regular local route between two satellite towns in the Moscow region.

More than 60 people were injured in the accident with 32 remaining in hospital overnight for treatment, the health ministry said. A dozen victims were said to be in a serious condition. – Rappler.com