Jul 16, 2013 10:31 PM PHT
Agence France-Presse
Facebook Twitter Copy URL
Copied
US Secretary of State John Kerry arrived in Jordan Tuesday on his sixth Middle East trip in as many months as he pushes for a resumption of Israeli-Palestinian peace talks 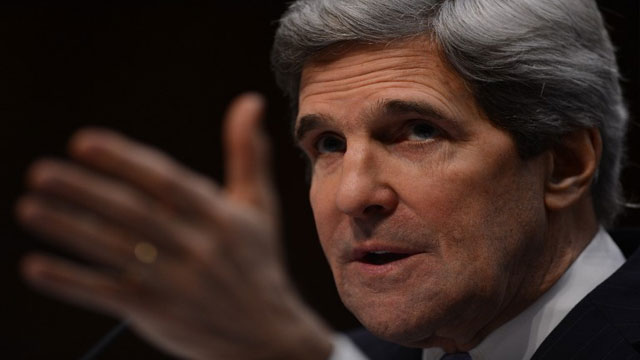 AMMAN, Jordan – US Secretary of State John Kerry arrived in Jordan Tuesday on his sixth Middle East trip in as many months as he pushes for a resumption of Israeli-Palestinian peace talks.

During his visit, Kerry is due to hold separate meetings with Jordanian leaders, Palestinian president Mahmud Abbas and an Arab League delegation.

Kerry was to meet later Tuesday with Jordanian Foreign Minister Nasser Judeh and have dinner with Palestinian president Mahmud Abbas.

On Wednesday, he is to hold talks with King Abdullah II and Arab League officials to “provide an update on Middle East peace,” said State Department spokeswoman Jen Psaki.

Officials had said Kerry would separately meet with the king, Abbas and Judeh on Tuesday.

Talks will also focus on the political upheaval in Egypt and the conflict in Syria, and it was expected that Egypt, a key member of the Arab League, will be sending someone to join the meeting in Amman.

A Palestinian official had told AFP that Abbas would meet Kerry in Jordan on Wednesday.

“It is expected that (Palestinian) president Abbas and Kerry will meet in Amman,” the official told AFP on condition of anonymity. “We are waiting to see what new ideas Kerry will bring with him after his last tour of the region.”

A senior State Department official said: “Secretary Kerry will have a private dinner with President Abbas this (Tuesday) evening.”

The full details of the trip were not yet finalised, said Psaki.

Another US official said it was not known who would represent the interim Egyptian government following the military’s July 3 ouster of Mohamed Morsi.

Since he took office on February 1, Kerry has made a search for a long-elusive Middle East peace deal one of the top priorities of his tenure.

But US officials were quick to downplay hopes that his return to the region signalled that an announcement was pending on a resumption of the talks, which have stalled since September 2010.

Psaki said however: “The secretary would not be going back to the region if he did not feel there was an opportunity to keep making steps forward.”

Last month Kerry spent four days locked in intensive shuttle diplomacy seeking to coax the two sides to end a nearly three-year stalemate, and said “with a little more work, the start of final status negotiations could be within reach.”

He left behind a team of top US officials who have been working to remove the last hurdles to fresh talks.

“They wouldn’t be there continuing those conversations if the secretary didn’t feel there was a path forward, so that’s why they’ve been on the ground,” a senior US official, asking to remain anonymous, told reporters.

Kerry had been expected to return to the region last week, but had to call off the trip after his wife suffered a seizure. She is recovering in a rehabilitation hospital. — Rappler.com