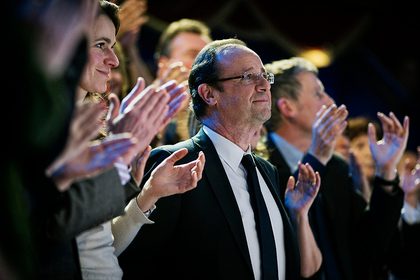 PARIS, France – France votes in the first round of a presidential election Sunday with Socialist Francois Hollande the favorite over incumbent Nicolas Sarkozy, whose personal style and handling of the economy alienated many voters.

Despite having no government experience, Hollande, 57, is leading in most opinion polls ahead of the first round and is the clear favourite to win the May 6 run-off vote.

Right-winger Sarkozy, also 57, has narrowed Hollande’s first-round lead with an aggressive campaign focusing on hot-button issues like security and immigration, and warnings that a Socialist win will spark financial chaos.

But pollsters say Sarkozy has failed to overcome disappointment over his five-year term since 2007, fuelled by his extravagant style and increasing joblessness despite his vows to create wealth and jobs.

Fears over unemployment, purchasing power and austerity measures have also seen Communist-backed candidate Jean-Luc Melenchon, 60, surge to a surprising third place in some polls, ahead of the far-right’s Marine Le Pen.

Le Pen, 43, took the reins of the National Front (FN) from her father Jean-Marie Le Pen last year and has been hoping for a repeat of his stunning 2002 showing when he defeated Socialist Lionel Jospin in the first round before losing to Jacques Chirac in the second.

Wooing their voters, and those of centrist Francois Bayrou who is polling at around 10 percent, will be key for Hollande and Sarkozy as they head into the two-week head-to-head campaign for the second round.

With France reeling from the eurozone debt crisis and unemployment recently hitting a 12-year high, the economy and public finances have topped the list of voters’ concerns during the campaign.

Hollande, a long-time Socialist Party leader who won a US-style primary last year, only emerged after the frontrunner for the nomination, the then IMF chief Dominique Strauss-Kahn, was embroiled in scandal after a Manhattan hotel maid accused him of sexual assault. The charges were later dropped.

A moderate decried by critics during the primary as “wishy-washy”, Hollande has vowed to balance France’s budget by 2017 while boosting taxes on the rich, increasing spending and creating thousands of state jobs.

He has scored populist points by declaring the world of finance his “enemy”, vowing a 75-percent tax bracket for incomes over a million euros and promising to re-negotiate the EU’s fiscal austerity pact to focus on growth.

In a speech to thousands of supporters in working-class eastern Paris on Sunday, Hollande declared himself the saviour of the “French dream”.

Sarkozy has hit back with predictions that a Socialist victory will spark a “massive crisis of confidence” among investors and a speculative run on the euro.

Speaking to supporters at his own massive Paris rally on Sunday, Sarkozy suggested the Socialists were out of touch with the modern world and urged the “silent majority” to back him.

“I will never accept an egalitarian, levelled-out France that turns its back on talent because it fears it,” he declared.

Sarkozy has played up his experience in the campaign, saying the economic crisis would have been far worse without his reforms and portraying himself as a world-class statesman.

He swung to the right with calls to limit immigration and tirades against “multiculturalism”, and focused on security issues — his efforts given a boost by his handling of last month’s shootings by an Islamist extremist in southern France.

His aides have said the first round is crucial for Sarkozy and that a win, along with the chance to face Hollande one-on-one, could give him the momentum to score an upset.

The polls are giving them little comfort however, with a recent CSA poll showing Hollande scoring a thumping first-round victory with 29 percent to Sarkozy’s 24%, and then sweeping the second round with 58%.

Other polls have shown the two frontrunners about even with 27 to 28 percent each, but poll after poll has shown Sarkozy losing in the second round.

About 45 million people are registered to vote but pollsters say the campaign has failed to capture voters’ imagination and are predicting a low turnout.

Polls will open at 0600 GMT on Sunday and close at 1800 GMT, when the first result predictions are expected. – Agence France-Presse