May 24, 2012 10:30 AM PHT
Rappler.com
Facebook Twitter Copy URL
Copied
Yes, things would have been different if the rest of the world were allowed to vote 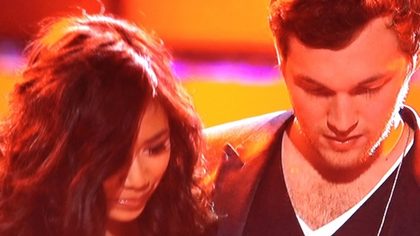 MANILA, Philippines – If we go by total social media sentiment, Jessica appeared to be in the lead.

So why did Phillip Phillips win the Season 11 of American Idol?

A study which analyzed the geolocation of tweets concerning the popular show showed that while Jessica led in terms of Twitter mentions globally, Phillips was generally favored in the US. (Read the full study below)

The Twitter data was analyzed in an attempt to predict the American Idol winner ahead of the airing of the official result.

The study, which analyzed the fanbase of each contestant, both within the US and abroad, revealed that “strong regional polarizations occur” with respect to social media chatter concerning the contestants.

See world rankings against US rankings below. The map below shows that the US social media denizens favored Phillip Phillips. It shows that Jessica’s fan base was from the West Coast and in other pockets of the US while Phillip was ahead with the rest of the country. Of course, things would have been different if the rest of the world including Pinoys were allowed to vote.

The study said that, “the advantage of Phillip in the U.S. is remarkably smaller than the one of Jessica in the aggregated dataset, and the voting coming from abroad might have a crucial role in determining the outcome of the ﬁnale.”

The study also said that Jessica is the only contestant that had a strong Twitter signal originating from outside of the U.S. (and in particular from the Philippines). It added that this strong Twitter sentiment favoring the Filipino-Mexican has been increasing after the show on April 19.

The maps below show social media attention focused on American Idol Season 11 emanating both within and outside the United States. 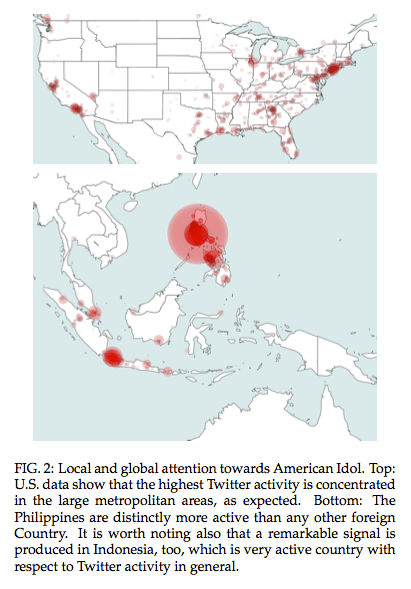 Click on the links below for more of the American Idol finale.

Click on the links below for previous social media predictions.