Jan 15, 2012 10:55 PM PHT
Michael Josh Villanueva
Facebook Twitter Copy URL
Copied
Hezbollah calls off attack on Bangkok after the arrest of one of its members.

MANILA, Philippines – A week after an alleged terrorist threat in Manila, Thai officials have detained a Lebanese man carrying a Swedish passport, suspected of being involved in a terrorist plot against Israeli nationals in Thailand Atris Hussein, 47, was taken into custody at Bangkok’s Suvarnabhumi Airport last Thursday, January 12, 2012, as he was attempting to leave Bangkok.

The Nation newspaper in Thailand, quoting National Police Chief Pol General Priewpan Damapong, reports that the Lebanese Shiite Hezbollah movement has “called of” its planned attack after the arrest of Atris. While Atris confessed to be a Hezbollah member, he denied being a part of the group’s militant arm. But  The Bangkok Post reports that Hezbollah official Ghaleb Abu Zainab denied that Hussein is a Hezbollah member.

Thai officials are still hunting down Hussein’s accomplice, whom based on composite sketches bares a close resemblance to Hezbollah operative Naim Haris according to Israeli news site Ynet News. 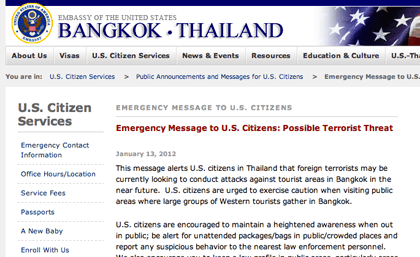 Last Friday, January 13, the US Embassy in Bangkok, issued an emergency message to US Citizens warning of a possible terrorist threat. The message warned, “that foreign terrorists may be currently looking to conduct attacks against tourist areas in Bangkok in the near future.” When questioned on Twitter, US Ambassador to Thailand Kristie Kenney stressed that the warning was based on “real, credible info” that they take “very seriously.”

Thai foreign minister Surapong Towichukchaikul however expressed his “disappointment and unhappiness” with the US embassy among other embassies for releasing the warning without first consulting the Thai foreign ministry. The Thai government had wanted to manage public concern and avoid panic, that could affect the country’s tourism industry.

The Philippine government reacted similarly in November 2010 when six countries (Australia, Britain, Canada, France, New Zealand, and the United States) advised their citizens against a “high threat” of terrorism. President Benigno Aquino III reacting to these announcements was quoted as saying, “the problem there is that, in their side of caution, we are the ones put at a disadvantage.” He added that the travel advisories were, “blown out of proportion” and done with no concrete basis.

This is in stark contrast to how the government reacted to an alleged terrorist threat last January 8th. The warnings came directly from the Philippine government when President Aquino himself warned of the planned terrorist attack to coincide with the feast of the Black Nazarene. This was despite findings by the Special Monitoring Committee of the National Intelligence Coordinating Agency (NICA) that there was no imminent threat to Metro Manila. – Rappler.com