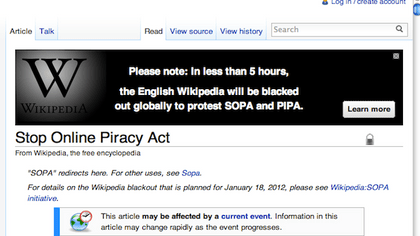 MANILA, Philippines [UPDATED] – Sorry students, you have to go to other websites or to the library to finish your homework.

Wikipedia, along with dozens of other websites, will literally go offline for 24 hours on Wednesday ( 1pm Manila time), January 18, to protest a proposed US law that they say will “harm” the internet.

“The Wikipedia community has chosen to blackout the English version of Wikipedia for 24 hours, in protest against a proposed legislation in the US – the Stop Online Piracy Act (SOPA) in the U.S. House of Representatives, and the PROTECTIP (PIPA) in the U.S. Senate,” a statement from the Wikimedia Foundation, released Monday, Jan. 16, 2012, said.

The popular online crowdsourced website will be offline at midnight US Eastern Time on Wednesday, Jan. 18 (1 pm Philippine Standard Time). Dozens of other websites, such as the Cheezburger Network of humor sites, Scribd, Reddit.com, and BoingBoing.com, also plan to go offline on Wednesday, at different times.

“This will be the first time the English Wikipedia has ever staged a public protest of this nature, and it’s a decision that wasn’t lightly made,” Sue Gardner, Wikimedia Foundation executive director, said in a statement addressed to the site’s readers and community.

“My hope is that when Wikipedia shuts down on January 18, people will understand that we’re doing it for our readers. We support everyone’s right to freedom of thought and freedom of expression… Our concern extends beyond SOPA and PIPA: they are just part of the problem. We want the Internet to remain free and open, everywhere, for everyone,” Gardner said.

The SOPA, US House Bill HR 3261 (“To promote prosperity, creativity, entrepreneurship, and innovation by combating the theft of U.S. property, and for other purposes”), and PIPA, US Senate Bill 968 (“Preventing Real Online Threats to Economic Creativity and Theft of Intellectual Property Act of 2011”), are two proposed laws that aim to stop piracy on the Internet, by blocking access to websites with pirated material – music, movies, TV shows, and other media.

If the bills are passed, court orders can be sought to bar websites accused of enabling or faciitating copyright infringement – even just by linking.

It could also bar advertisers, financial srvices and other internet businesses to transact with such sites, or for internet service providers to block access to the infringing sites.

Proponents say the SOPA and PIPA will protect intellectual property, and will strengthen copyright laws. Opponents say it is Internet censorship and will affect the free speech.

“This is an extraordinary action for our community to take – and while we regret having to prevent the world from having access to Wikipedia for even a second, we simply cannot ignore the fact that SOPA and PIPA endanger free speech both in the United States and abroad, and set a frightening precedent of Internet censorship for the world,” Jimmy Wales, Wikipedia founder, was quoted as saying.

Meanwhile, other anti-SOPA websites won’t be joining the blackouts. Google, instead of going offline, plans to place a link on its homepage for information on the proposed bills.

Meanwhile, Twitter, another SOPA opponent, won’t be joining: CEO Dick Costolo said, in a tweet, that closing down the site as protest “to single-issue national politics is foolish.” Costolo, however, clarified that he is only referring to Twitter.

Internet users have also taken sides in the issue. On Twitter, for example, supporters have been using the hashtags #WikipediaBlackout and #BlackoutSOPA to join the online protest. Protests are also planned in the cities of San Francisco, Seattle, and New York.

On the other side of the conversation, pro-SOPA groups and personalities, in particular media mogul Rupert Murdoch, have also been very vocal about their support of the bills. Murdoch has also been open in his criticisms of the bills’ opponents, saying that Google is a “piracy leader” and that the Obama government has acquiesced to the whims of “Silicon valley paymasters.”

The White House, on Saturday, Jan 14, 2012, also released a statement on the SOPA and PIPA in reaction to a petition to stop the bills, and in effect showing their support for the anti-SOPA side.

“While we believe that online piracy by foreign websites is a serious problem that requires a serious legislative response, we will not support legislation that reduces freedom of expression, increases cybersecurity risk, or undermines the dynamic, innovative global Internet,” the White House said.

The Obama administration also appealed for all sides “to work together” to come up with a bill that would protect intellectual property but also protects the openness of the web.

The vote on the SOPA at the US House of Representatives is reportedly posponed to February, while the US Senate will vote on PIPA on Jan. 24, 2012. – Rappler.com