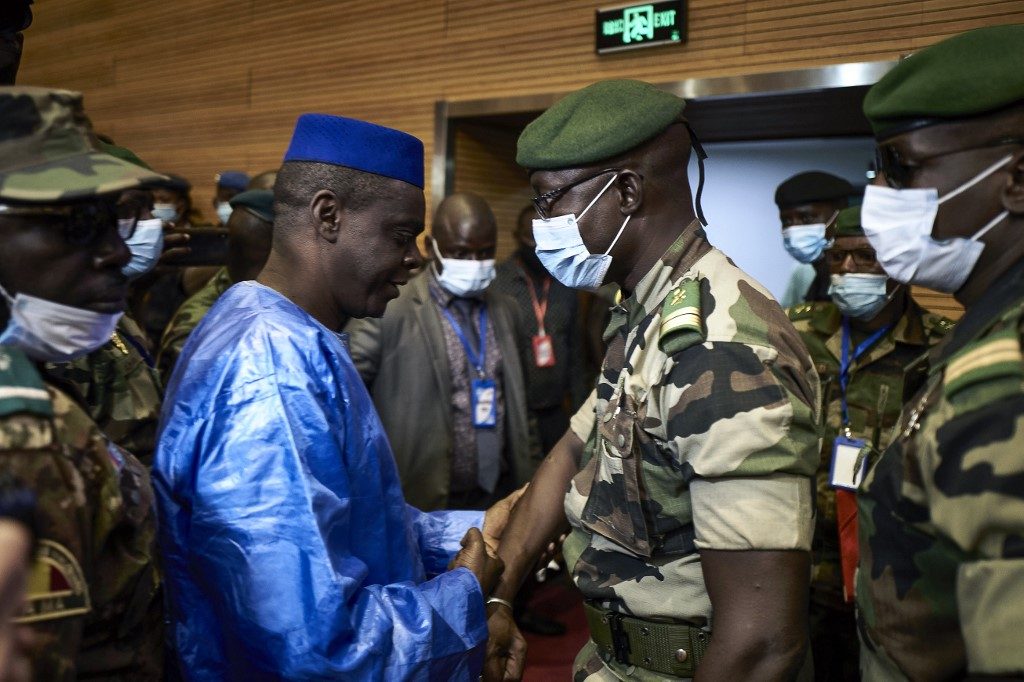 Vice-President of the CNSP (National Committee for the Salvation of the People) Colonel Malick Diaw (R) shakes hands with Issa Kaou Djim, a leading figure in the June 5 Movement, during a ceremony to open two days of talks aimed at validating the terms of reference for a transitional government in Mali, on September 5, 2020, in Bamako. - Mali's military junta began talks with opposition groups on September 5 on its promised transition to civilian rule after mounting pressure from neighbours to yield power in the weeks since it overthrew the nation's leader. The West African country has long been plagued by chronic instability, a simmering jihadist revolt, ethnic violence and endemic corruption, prompting a clique of rebel colonels to detain the president last month. (Photo by MICHELE CATTANI / AFP)

Mali’s military junta on Thursday, September 10, launched a three-day “national consultation” with political parties, unions and NGOs, facing questions at home and pressure from abroad over its plans for returning the country to civilian rule.

Around 500 people are attending the forum, unfolding at a conference center in Bamako, the capital of the impoverished West African state.

The talks mark the second round of discussions between the young officers who overthrew President Ibrahim Boubacar Keita on August 18 and civilian representatives, many of whom had campaigned fiercely for him to resign.

At stake is how the junta intends to make good on its vow, made just hours after the coup, to restore civilian governance and stage elections within a “reasonable time.”

At the opening of the talks, the normally spotlight-shy head of Mali’s junta, Colonel Assimi Goita, underscored the importance of delivering “political and institutional reforms” and an outline for restoring a civilian government.

“We are condemned by future generations to succeed,” he said.

But there were early signs of discord as the forum got underway on Thursday, as police fired tear gas at youngsters who wanted to enter the premises.

Awa Diallo, a 22-year-old student, told Agence France-Presse (AFP) that the junta “must respect their promise and involve all Malians in the debates on the transition.”

The Coordination of Azawad Movements (CMA), a mostly Tuareg alliance of armed rebel groups who launched a rebellion in 2012, also decided to boycott the talks on Saturday, September 12.

“Our concerns have not been taken into account,” said Almou Ag Mohamed, who added that the ruling junta had canceled a recently planned meeting with the CMA.

Early jubilation among many Malians over Keita’s exit has been superseded by questions and also divisions over the speed of the handover and the military’s role in the transition period.

The coup – Mali’s fourth since gaining independence from France in 1960 – came after months of protests, stoked by Keita’s failure to roll back a bloody jihadist insurgency and fix the country’s many economic woes.

Mali’s neighbors have watched with concern, fearing the country could spiral back into chaos – a scenario that 8 years ago helped fuel the jihadist revolt which now rattles Niger and Burkina Faso.

The junta initially talked of a three-year transition, corresponding to the time left in Keita’s second five-year mandate, that would be overseen by a soldier.

In contrast, the 15-nation regional bloc ECOWAS has set a hard line, closing borders, banning trade with Mali and insisting that the handover last 12 months maximum.

In the run-up to the talks, the group said Mali’s civilian transition president and premier must be appointed no later than September 15.

The so-called June 5 Movement, which engineered the wave of anti-Keita protests, is split.

Some voices argue in favor of giving the military a long handover in order to tackle the problems that have driven the country to the brink.

Others say that this would simply worsen instability – 4 more Malian troops were killed in an attack on the eve of the talks – and set a poor example for democracy in West Africa.

A committee of around 20 lawyers, researchers and academics has drawn up a draft “road map” resulting from a first round of talks on Saturday.

This document will be put to the forum “for amendment, improvement and enrichment,” its chair, Diarra Fatoumata Dembele, told AFP. – Rappler.com