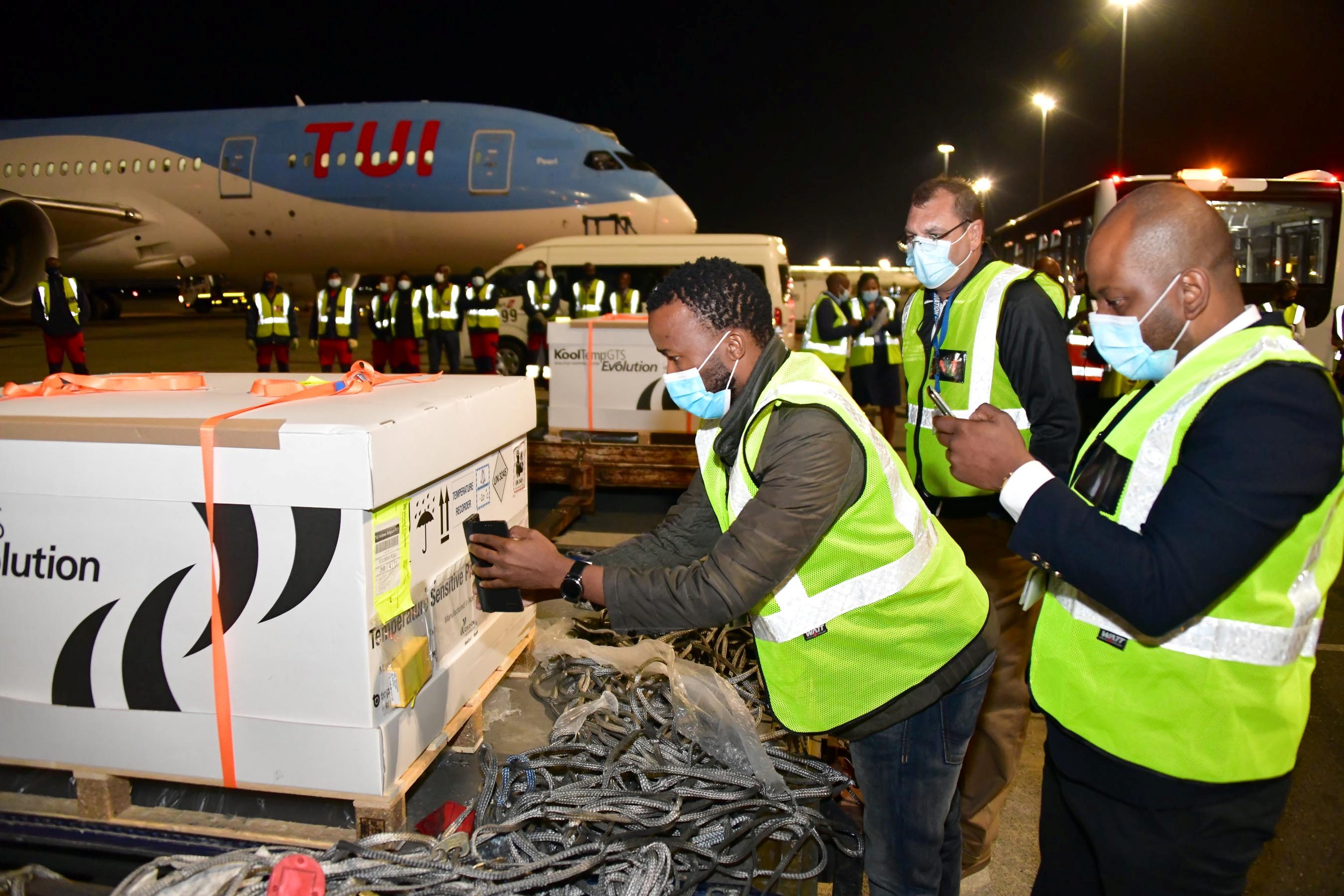 ARRIVAL. Workers offload pallets containing the first Johnson and Johnson COVID-19 vaccine doses as they arrive at OR Tambo airport in Johannesburg, South Africa, on February 16, 2021.

Handout photo by Elmond Jiyane for GCIS via Reuters

Facebook Twitter Copy URL
Copied
The government plans to vaccinate 40 million people, or two-thirds of the population in Africa's most industrialized economy

South Africa launched its COVID-19 vaccination drive on Wednesday, February 17, battling to tame a more infectious variant of the coronavirus with a roll-out of the Johnson & Johnson shot for the first time outside a clinical trial.

Authorities in South Africa have recorded almost half of the COVID-19 deaths in all of Africa and over a third of confirmed infections on the continent, but has lagged wealthier Western nations in launching mass immunization programs.

The government plans to vaccinate 40 million people, or two-thirds of the population in Africa’s most industrialized economy, to achieve some level of herd immunity.

“The Johnson & Johnson vaccine has been shown in extensive trials to be safe and efficacious and will protect our health care workers from illness and death from COVID-19,” President Cyril Ramaphosa said in a statement.

The J&J shot is being deployed for the first time outside of a major clinical trial as part of a research study targeting up to 500,000 healthcare workers. J&J has been submitting data to South African medicines regulator SAHPRA to secure registration for a larger-scale roll-out.

Nurse Zoliswa Gidi-Dyosi was the first to be vaccinated at Khayelitsha District Hospital in Cape Town, followed by a doctor, a member of the hospital’s housekeeping staff and an administrative clerk, the government said.

South Africa is one of the first nations on the continent, along with Rwanda, Morocco and Egypt, to vaccinate against COVID-19.

Ramaphosa’s government has been under pressure to get the first shots in arms quickly after pausing the roll-out of AstraZeneca’s vaccine earlier this month.

The decision to suspend use of the AstraZeneca jab came after preliminary trial data indicated that it offered minimal protection against mild to moderate illness from the 501Y.V2 variant dominant in the country. The suspension has deepened skepticism among some South Africans about COVID-19 vaccines.

Ramaphosa said earlier on Wednesday 80,000 J&J doses were being prepared for distribution across the country and that he would get inoculated on the first day of the program to demonstrate his government’s confidence in the J&J vaccine.

He said most vaccination centers would be ready to begin immunizations on Wednesday.

The 501Y.V2 virus variant, first identified by South African genomics scientists late last year, has alarmed health experts for its ability to potentially evade the immune response generated by prior exposure to the coronavirus or vaccines.

The government has said it could sell or swap its AstraZeneca doses for shots of another vaccine.

AstraZeneca says it believes its vaccine protects against severe COVID-19 and that it has started adapting it against the 501Y.V2 variant. – Rappler.com