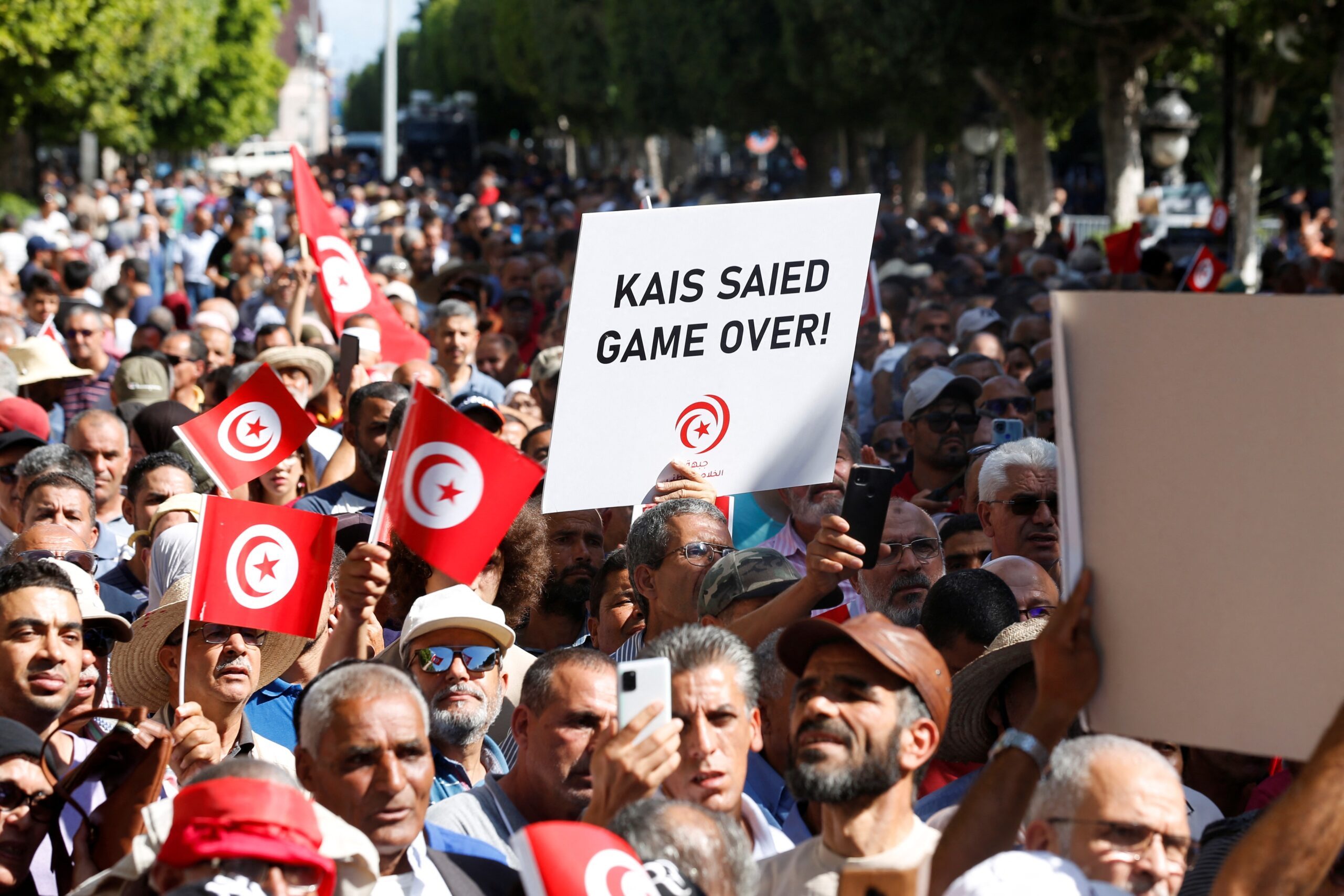 Facebook Twitter Copy URL
Copied
'The situation is about to explode and is dangerous for the future,' says Ali Larayedh, Ennahda former prime minister

TUNIS, Tunisia – Two rival Tunisian opposition groups staged one of the biggest days of protest so far against President Kais Saied on Saturday, October 15, denouncing his moves to consolidate political power as public anger grows over fuel and food shortages.

Thousands of supporters from the Islamist Ennahda party and the Free Constitutional Party held parallel rallies in adjacent areas of the capital, Tunis, accusing Saied of economic mismanagement and of an anti-democratic coup.

“Tunisia is bleeding. Saied is a failed dictator. He has set us back for many years. The game’s over. Get out,” said protester Henda Ben Ali.

Saied, who moved to rule by decree after shutting down parliament last year and expanding his powers with a new constitution passed in a July referendum, has said the measures were needed to save Tunisia from years of crisis.

In a speech on Saturday to commemorate the departure of French troops upon Tunisia’s 1956 independence, he demanded the departure today of “all who want to undermine independence” – an apparent allusion to his political foes.

Ennahda and the Free Constitutional Party have long been bitter foes, but both are now more focused on their struggle against Saied.

Tunisians are meanwhile struggling to make ends meet as a crisis in state finances has contributed to shortages of subsidised goods including petrol, sugar and milk on top of years of economic malaise and entrenched unemployment.

The president, who has blamed hoarders and speculators for the shortages, appears to retain broad support among many Tunisians, but the growing hardships are causing frustration and increasing the flow of illegal migrants to Europe.

In the southern town of Zarzis this week, residents protested over the burial in unmarked graves of local people who had died in one of the many shipwrecks of migrants trying to reach Italy.

“While our youth are dying at sea in boats to escape from hell, Saied is only interested in gathering power,” said Monia Hajji, a protester.

In Tunis, there have been some isolated clashes this week in poor districts between police and protesting youths, and there was a heavy police presence in the city on Saturday.

The Free Constitutional Party leader Abir Moussi, a supporter of the pre-revolution autocracy, criticized the stringent security arrangements in a speech to protesters, asking Saied: “Why are you afraid?”.

At both rallies, protesters chanted “the people want the fall of the regime,” the slogan of the 2011 revolution.

“The situation is about to explode and is dangerous for the future,” said the Ennahda former prime minister Ali Larayedh. – Rappler.com