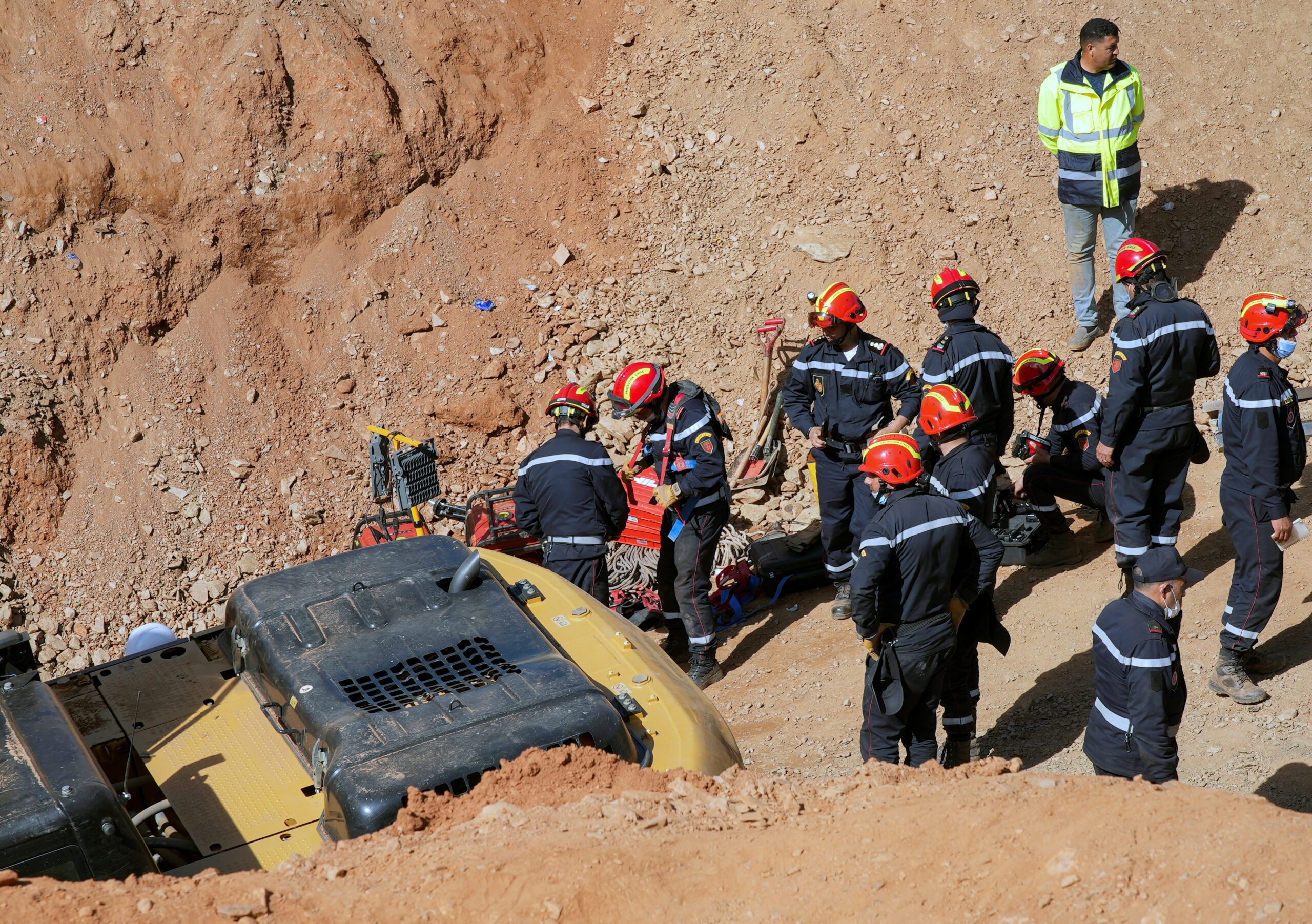 TRAPPED. Rescuers work to reach a five-year-old boy trapped in a well in the northern hill town of Chefchaouen, Morocco February 5, 2022.

RABAT, Morocco – Rescuers on Saturday, February 5, dug to within a few meters of reaching a young boy who has been trapped for five days in a well in northern Morocco, a delicate and dangerous operation constantly delayed by rocks and imperilled by the threat of landslides.

Workers with mechanical diggers have been trying round the clock to rescue the five-year-old child, Rayan Awram, after he fell into a 32-meter (100-foot) deep well in the hills near Chefchaouen on Tuesday, February 1.

“We have two meters more to dig to reach Rayan and we hope we will not encounter rocks,” lead rescuer Thamrani Abdelhadi told reporters at the site on Saturday afternoon.

He said it was difficult to determine the child’s health condition because a camera that has been dropped down the well shows him lying on his side, but he added “we hope we will rescue him alive.”

It was also unclear how long the digging will take due to difficulties relating to rocks and the danger of landslides, he said.

Pictures on Moroccan media have shown Rayan huddled at the bottom of the disused well, which narrows as it descends from 45 centimeters (18 inches) wide at the top, preventing rescuers from descending.

Workers in helmets and high-visibility vests carried stretchers, ropes, tackle and other equipment down into a pit they have dug parallel to the well.

On Friday, February 4, they began carefully excavating a horizontal tunnel towards the child, sometimes being ordered out to stabilize the earth. The work grew more difficult as they encountered rocks between the trench and the well, a witness said.

The rescuers are placing concrete and steel pipes into the horizontal tunnel as they dig to allow them to pull Rayan to safety.

“People who love us are sparing no effort to save my child,” said the child’s father in a tired, barely audible voice, as he stood watching rescue efforts on Friday night, wearing a traditional hooded woollen robe against the cold.

“We pray this will be the day of his rescue,” he said.

Hundreds of villagers stood waiting nearby for news as the rescue operation continued.

A male relative of the boy told Reuters TV that the family had first realised he was missing when they heard muffled crying and lowered a phone with its light and camera on to locate him.

“He was crying ‘lift me up,'” the relative said.

The hilly region around Chefchaouen is bitterly cold in winter and though food has been lowered to Rayan, it was not clear whether he has eaten any. He has also been supplied with water and oxygen using a tube. – Rappler.com