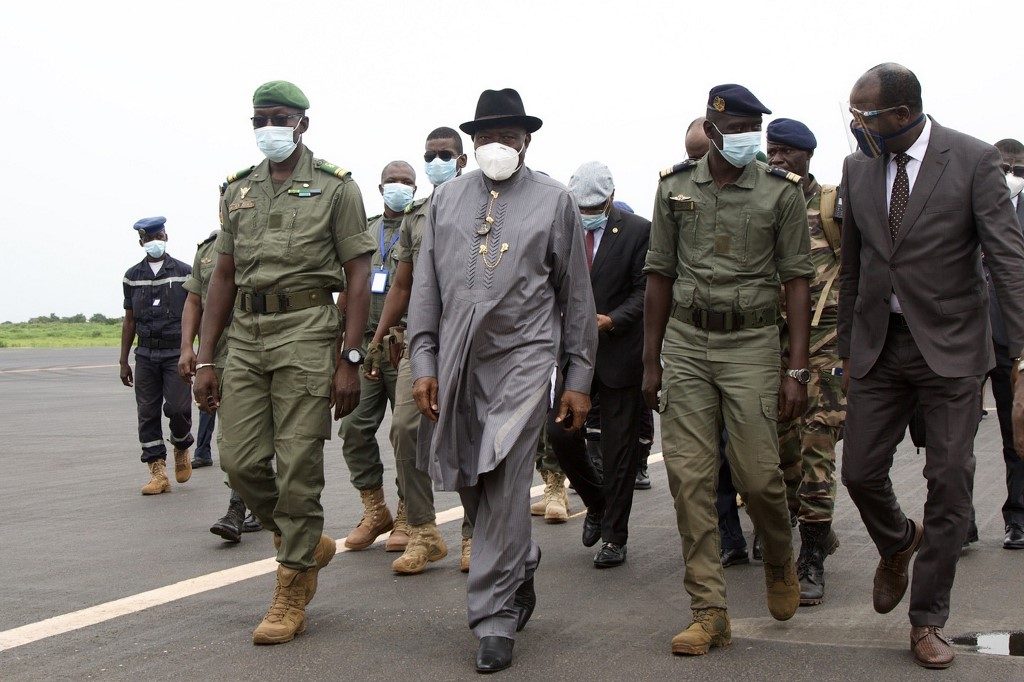 Former Nigerian President Goodluck Jonathan (2L) walks at the International Airport in Bamako upon his arrival on August 22, 2020 next to by Malick Diaw (L), the Vice President of the CNSP (National Committee for the Salvation of the People). - A delegation of West African leaders headed by former Nigerian president Goodluck Jonathan arrived in the Malian capital Bamako on August 22 on a mission to restore order after a military coup. (Photo by ANNIE RISEMBERG / AFP)

A West African delegation visiting Mali to push for a speedy return to civilian rule following a coup said it was “very hopeful” on Saturday, August 22, after meeting with the country’s military junta and the president it ousted.

“We saw him, he’s very fine,” said Jonathan, who had earlier met for half an hour with the soldiers who seized power on Tuesday, August 18, including new strongman Colonel Assimi Goita.

Jonathan told AFP that negotiations were going well and he was “very hopeful.” (READ: West African leaders add to pressure on Mali after coup)

Rebel soldiers seized Keita and other leaders after a mutiny on Tuesday, dealing another deep blow to a country already struggling with a brutal Islamist insurgency and widespread public discontent over its government.

Mali’s neighbors have called for Keita to be reinstated, saying the purpose of the delegation’s visit was to help “ensure the immediate return of constitutional order.”

“We hope to be able to finalize everything by Monday,” he added.

Ismael Wague, spokesman for the junta, which calls itself the National Committee for the Salvation of the People, also said the negotiations were going “very well.”

A source close to the junta said the ECOWAS envoys had made a “good impression.”

“We understand that heads of state, like Ivory Coast’s Alassane Ouattara, are working for an easing of tensions, for a peaceful solution, even if they have firmly condemned our seizing power. We are open to discussion,” the source told AFP.

The envoys also visited the Kati military base outside the capital Bamako where the coup began and which has become a new centre of power, the source said.

President Keita has been held at the base since the coup, along with prime minister Boubou Cisse and other high-ranking government figures.

Thousands of jubilant Malians took to the streets of Bamako on Friday, August 21, to celebrate the toppling of Keita, who was reelected in 2018 but became the focus of widespread discontent. 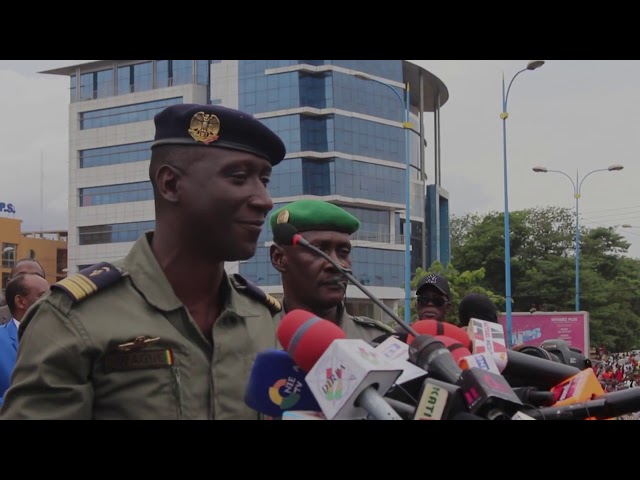 The rally, originally organized as an anti-Keita protest by a loose coalition that has led months of mass rallies against him, was recast to “celebrate the victory of the Malian people.”

But it was a different story on Saturday, when several dozen people who tried to rally in Bamako were dispersed by police.

“We are here this morning to show that we do not agree with the coup. But people attacked us with stones, then the police took advantage of this aggression to disperse our supporters,” said Abdoul Niang, an activist of a pro-Keita party.

There has been international pressure to restore order, the United States on Friday suspending military aid to Mali, with no further training or support of the country’s armed forces.

The ECOWAS delegation will meet with the ambassadors in Mali of the 5 permanent members of the United Nations Security Council – Britain, China, France, Russia, and the US– on Sunday morning, according to the programme seen by AFP.

Keita won election in a landslide in 2013, presenting himself as a unifying figure in a fractured country, and was re-elected in 2018 for another 5-year term.

But he failed to make headway against the jihadist revolt that has left swathes of the country in the hands of armed Islamists and ignited ethnic violence in the country’s volatile centre.

In a sign of the continuing challenge facing the country, 4 soldiers were killed Saturday by an explosive device in the center of the country.

The ECOWAS visit with Keita comes after the UN’s peacekeeping mission in Mali said a human rights team gained access to the ousted president and other detainees on Thursday, August 20.

While Keita and Cisse have no television, radio or phone, other detainees are in a training center, where they are sleeping on mattresses and have a TV, according to witnesses to the visit.

The 75-year-old ousted president “looked tired but relaxed,” they said.

Tuesday’s coup was the second in 8 years, and has heightened concern over regional stability as its jihadist insurgency now threatens neighboring Niger and Burkina Faso. – Rappler.com