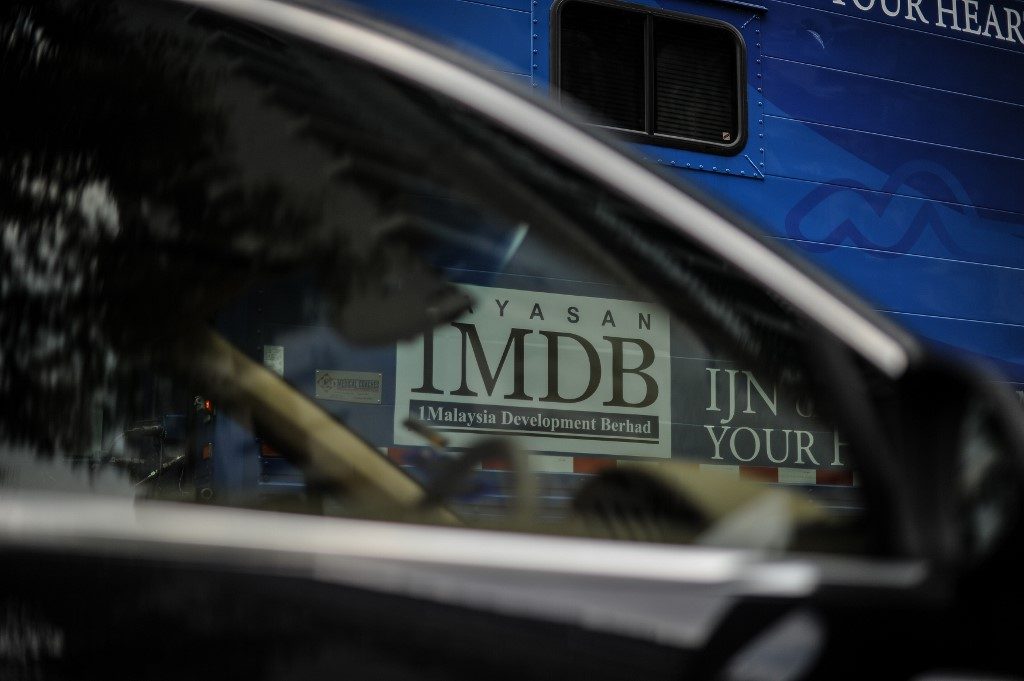 1MDB SCANDAL. The 1 Malaysia Development Berhad (1MDB) logo is seen through the window of a car in Kuala Lumpur on March 14, 2016. File photo by Mohd Rasfan/AFP

Najib Razak, the then-prime minister, was a key figure in the plundering of sovereign wealth fund 1Malaysia Development Berhad (1MDB), and was convicted Tuesday, July 28, in his first corruption trial linked to the fraud.

1MDB was a state investment fund which Najib launched in 2009 shortly after becoming prime minister.

Its portfolio included power plants and other energy assets in Malaysia and the Middle East, as well as real estate in Kuala Lumpur.

The fund was closely overseen by Najib.

Whistleblowers say Low Taek Jho, a jet-setting Malaysian financier close to Najib but with no official position, helped set up 1MDB and made key financial decisions.

The scandal first came to light through the Sarawak Report news portal, and gained further traction in 2015 when The Wall Street Journal published documents showing Najib received at least $681 million in payments to his personal bank accounts.

The US Justice Department launched its own probe after claims that stolen Malaysian public money was laundered through the US financial system, and has filed lawsuits seeking some $1.8 billion in assets allegedly purchased with the cash.

The department said more than $4.5 billion was stolen from 1MDB between 2009 and 2015 by high-level officials at the fund and their associates.

Tens of millions of dollars were used in 2012 by Najib’s stepson Riza Aziz, an aspiring film producer, to fund the Hollywood film “The Wolf of Wall Street”, starring Leonardo DiCaprio.

Hundreds of millions were also used, mainly by Riza and Low, to purchase high-end real estate in Beverly Hills, New York and London.

A Monet painting bought for $35 million, a Van Gogh for $5.5 million, a $35-million Bombardier jet, a $100-million stake in EMI Music Publishing, and a $250 million yacht were also ticked off the shopping list.

Najib desperately sought to contain the scandal, targeting critics and introducing repressive laws, but the allegations hit the popularity of his long-ruling coalition and contributed to a shock election defeat in 2018.

A new government headed by veteran politician Mahathir Mohamad, now aged 95, came to office on a wave of public anger, and re-opened investigations.

Najib was hit with dozens of charges, and his first trial over the scandal finally started in April last year.

But in February, the reformist alliance collapsed after bitter infighting, and a new coalition that included Najib’s scandal-plagued party seized power.

There were concerns this could impact Najib’s trials — particularly after 1MDB-linked charges against Riza were unexpectedly dropped in May.

But those fears proved unfounded after a judge Tuesday found Najib guilty of all seven charges in his first trial linked to 1MDB. He could now face decades in jail.

The case centred on allegations that 42 million ringgit ($9.9 million) was transferred to the 67-year-old’s bank accounts from SRC International, a former unit of the fund.

His lawyers insisted he had no knowledge of the transfers and claimed that Low was the true mastermind behind the scam.

But Judge Mohamad Nazlan Mohamad Ghazali said the idea that Low had tricked Najib was “far-fetched”, and also dismissed the argument the ex-leader believed the money in his account was a donation from Saudi royalty.

It is not the most significant of the trials he is facing. That one began in August last year, with Najib accused of illicitly obtaining 2.28 billion ringgit ($535 million) from 1MDB. – Rappler.com