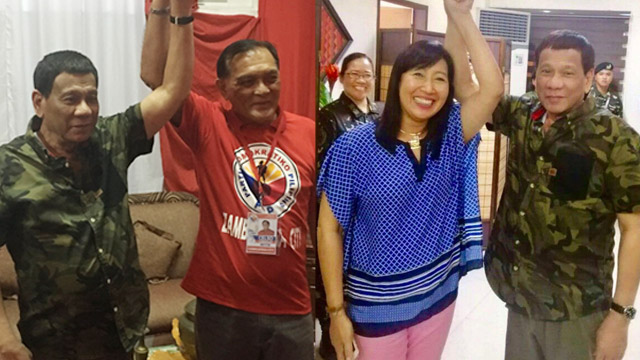 Duterte endorsed Lobregat during a rally for PDP-Laban senatorial bets and guest candidates. He endorsed Climaco after a security briefing at the Edwin Andrews Air Base.

Both candidates thanked Duterte for his support.

In his official Facebook page, Lobregat posted photos with Duterte and a statement of gratitude.

“Thank you very much, muchisimas gracias and daghan salamat to President Duterte for your support and endorsement,” Lobregat said.

Climaco, for her part, also posted a photo of Duterte raising her hand. In his speech during the rally, Duterte said Climaco is his “friend.”

“[She] thanks President Rodrigo Duterte for his endorsement to her third term re- election bid as Mayor of Zamboanga City,” the caption of the photo said.

Asked for comment, PDP-Laban maintained Lobregat is the official candidate of the party. (READ: How Duterte’s political style is hurting PDP-Laban)

PDP-Laban campaign spokesman Ron Munsayac said he has not yet seen Duterte’s photo with Climaco.

“I haven’t seen the photo that [Duterte] was raising Mayor Climaco’s hand but one thing is for sure, she’s a stalwart and official of the Liberal Party, the current opposition party that has constantly criticized the President and his administration,” he added.

Lobregat is the son of the late mayor and Marcos ally Maria Clara Lobregat, while Climaco Salazar is the niece of former mayor Cesar Climaco, who defeated the elder Lobregat in the 1984 Batasan Pambansa elections. – Rappler.com