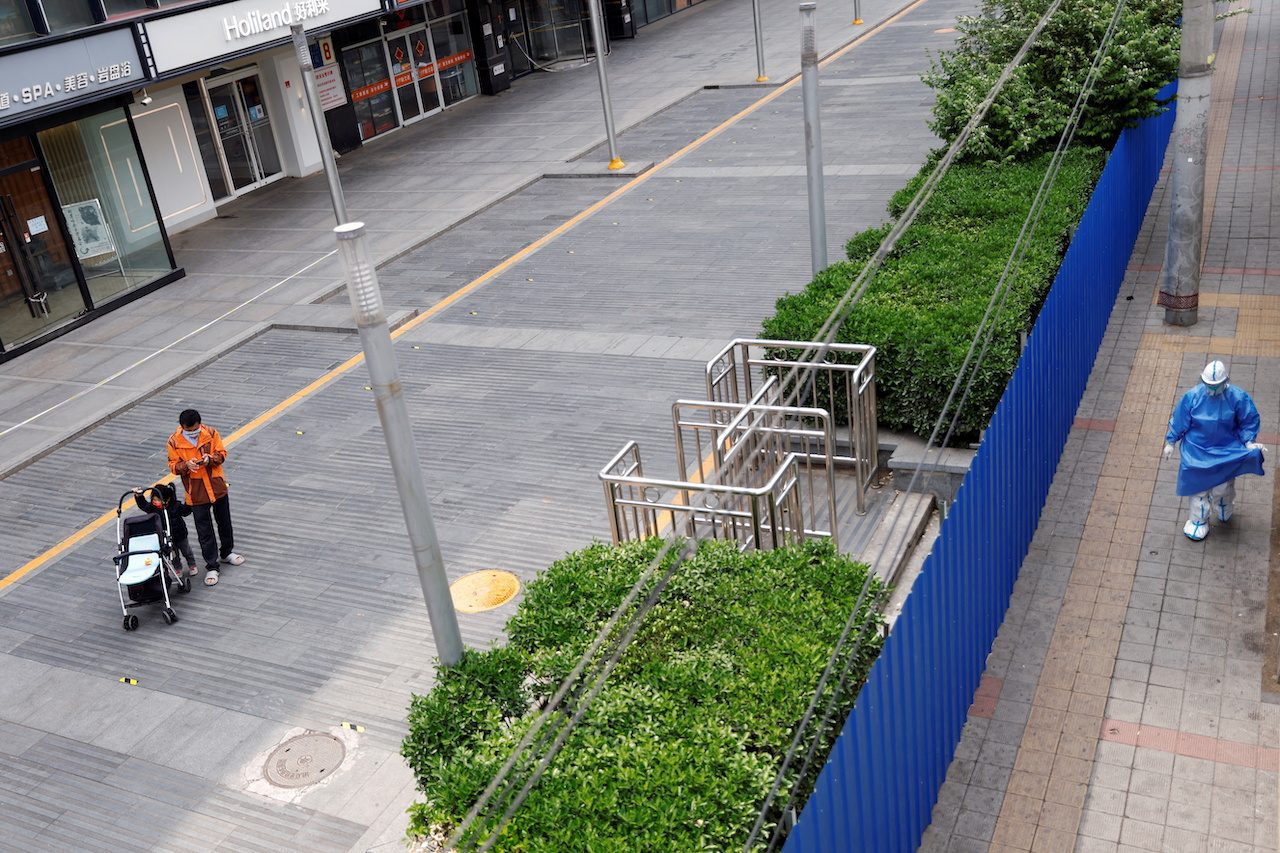 LOCKDOWN. A worker in a protective suit walks outside a barricaded area under lockdown, amid the COVID-19 outbreak in Beijing, China, April 29, 2022.

China’s capital Beijing tightened COVID-19 restrictions on Sunday, May 1, as it battled an outbreak, while Shanghai let some of its 25 million residents venture out for light and air after reporting a second day of zero infections outside of quarantine areas.

Shanghai’s outbreak, which began in March, has been China’s worst since the early months of the pandemic in 2020. Hundreds of thousands have been infected and the city has forbidden residents from leaving their homes, to great public anger.

The outbreak in China’s most populous city and the risk of a spread in Beijing are testing the government’s zero-COVID approach in a year when Xi Jinping is expected to secure an unprecedented third term as president.

Beijing, with dozens of daily infections in an outbreak now in its 10th day, has not locked down. More than 300 locally transmitted cases have been logged since April 22.

But on Sunday, the capital tightened social distancing rules and launched a fresh round of mass testing in its most populous and worst-hit district.

In the past week the city of 22 million has conducted mass testing in most of its 16 districts, suspended all entertainment venues, and banned restaurant dining.

“Our boss is stressing out about this too,” Jia said, asking to be identified only by his surname. “We have three branches in Shanghai. They’ve all been shut and losing cash for a month. And now this.”

Beijing’s sprawling Universal Studios theme park closed on Sunday, while in the highly visited Badaling section of the Great Wall, visitors were told to show proof of negative COVID-19 test results before entering.

Chaoyang district, accounting for the biggest share of infections in Beijing’s outbreak, launched an additional round of mass testing, with public health workers knocking on doors to remind residents to get tested.

Shanghai’s citywide lockdown since early April has upended the daily lives of its residents, sparking worries about food and concern about being taken to crowded quarantine centres should they catch the virus.

Extreme measures taken to seal up residential compounds, including fencing up entrances of buildings, have prompted outrage.

Some residents have turned to social media to vent their frustration, some clanged pots and pans outside their windows, and others clashed with public health workers.

The song “Do you hear the people sing?” from the musical Les Miserables has become a popular protest anthem. On Saturday, an online video of a Chinese orchestra playing the song, with the musicians performing from their respective homes, went viral with nearly 19,000 shares before it was blocked.

While much of the city remains in lockdown, Shanghai officials, striking a confident tone, said on Sunday that curbs on some areas would be eased after the city reined in COVID-19 transmission risks at the community level, excluding cases in quarantine centers. Public transport will be allowed to resume in five districts, but residents must remain in their districts as they visit supermarkets, pharmacies and hospitals, a health official told the news conference.

Social media posts showed the streets of Fengxian, one of the six districts, filled with pedestrians and choked with scooters and bicycles. Reuters could not independently verify the videos.

But despite the fall in transmissions, Shanghai will launch a new round of citywide PCR and antigen tests from Sunday until May 7.

Excluding imported cases arriving from outside the mainland, China reported 8,256 new local cases for Saturday, down from 10,703 a day before. Beijing accounted for 59 of the infections, while Shanghai saw 7,872 new cases and all of the nation’s 38 fatalities. – Rappler.com