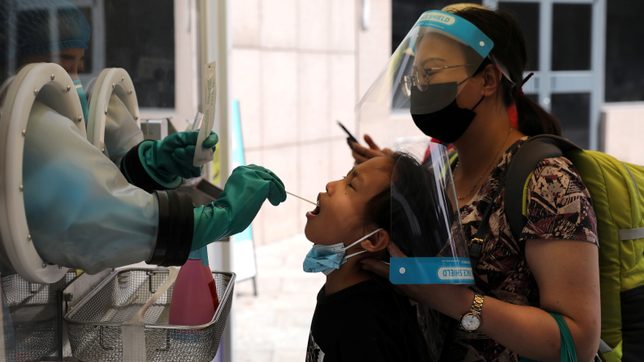 CURRENT OUTBREAK. A medical worker collects a swab from a girl at a mobile nucleic acid testing site outside a railway station, following new cases of COVID-19 in Beijing, China, on August 6, 2021.

Facebook Twitter Copy URL
Copied
Confirmed cases are patients who display symptoms such as a cough or fever, or signs of infection when scanned. China does not include symptomless cases in its tally until signs of disease show up.

China reported on Friday, August 6, its highest daily count of new COVID-19 patients in an outbreak that began in late July, fueled by a surge in locally transmitted infections.

Officials blamed the latest clusters mainly on the highly transmissible Delta variant, though it has not led to widespread infection in some cities, while cases in some areas show initial signs they could ease.

Confirmed cases are patients who display symptoms such as a cough or fever, or signs of infection when scanned. China does not include symptomless cases in its tally until signs of disease show up.

The local cases were driven by a surge in infections in eastern Jiangsu province, which reported 61 new local cases for Thursday, up from 40 a day earlier.

The latest infections were mainly in the provincial city of Yangzhou on the lower reaches of the Yangtze river, near the commercial hub of Shanghai.

To keep the virus within its borders, Yangzhou closed the passenger entrances of two railway stations on Friday. It has already suspended domestic flights, and the flow of taxis and ride-hailing vehicles with other cities.

The coronavirus first emerged in late 2019 in the central city of Wuhan in Hubei province, but China had until recently largely managed to prevent any major local outbreaks sparked by infections imported from abroad.

Since July 20, when the first cases of the current outbreak were detected in the Jiangsu city of Nanjing, the virus has spread to about 40 cities, including the capital, Beijing.

Nanjing and Yangzhou now account for more than 70% of local confirmed cases in China since late July, though not all the local cases are linked to the two cities.

This week, NHC official He Qinghua said he expected China to bring the outbreak under control within weeks if local authorities took sufficient measures, though he acknowledged that efforts would be complicated.

Still, there are signs that some regions have averted rampant spread with measures such as lockdowns of affected areas, swab tests to identify the infected, intensive contact tracing and curbs on domestic travel.

By Friday, there were no new confirmed cases this month in five of the 16 provinces, regions and municipalities that had reported local cases since July 20, NHC data showed.

Also since July 20, more than a dozen cities, including Shanghai, have reported no more than one locally transmitted case a day, and no new infections on some days, data from local authorities showed, suggesting they have managed to curb infections.

Even Nanjing, which had the most local cases in its Delta-triggered outbreak since July 20, reported only one case for August 5.

China reported 58 new asymptomatic cases, up from 54 a day earlier, but no new deaths.

By Thursday, the nationwide tally of confirmed cases stood at 93,498, with the death toll unchanged at 4,636. – Rappler.com