Some in China return to regular activity after COVID infections 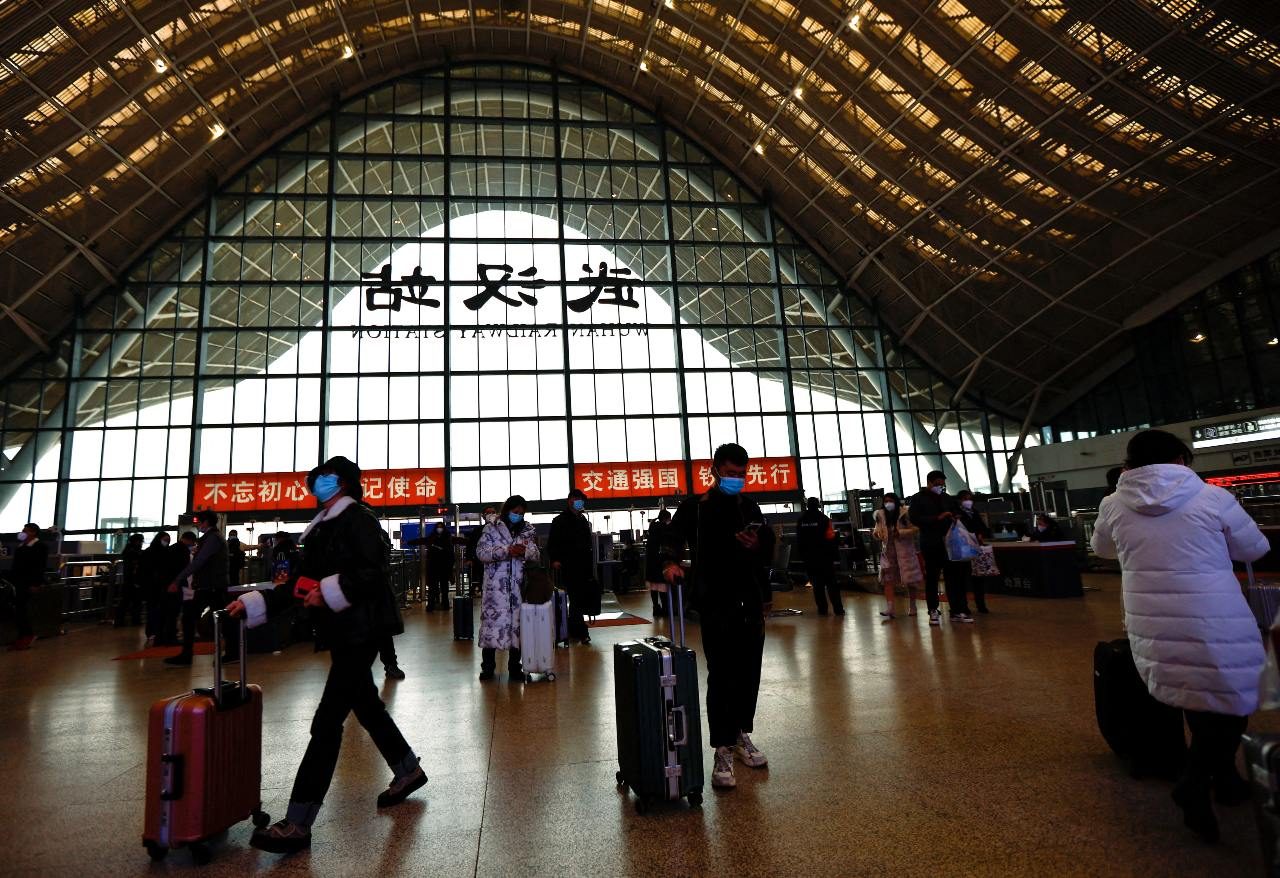 WAITING. People wait with luggages at a railway station, amid the COVID-19 outbreak, in Wuhan, Hubei province, China, on January 1, 2023.

Facebook Twitter Copy URL
Copied
A wave of infections has erupted nationwide since the dismantling of the zero-COVID policy, fueling international concern and prompting some countries to impose curbs on travelers from China

BEIJING, China – Some people in the Chinese cities of Beijing, Shanghai and Wuhan braved the cold and a rise in COVID-19 infections to return to regular activity on Monday, January 2, raising the prospect of a boost to the economy as more recover from infections.

Among those who gathered to sled or ice skate on a frozen lake in the capital’s Shichahai Lake Park, some were upbeat about the opening-up after China dropped stringent “zero-COVID” measures on December 7 to adopt a strategy of living with the virus.

The switch followed protests over the policy championed by President Xi Jinping, marking the strongest show of public defiance in his decade-old presidency and coinciding with grim growth figures for the country’s $17 trillion economy.

However, a wave of infections has erupted nationwide since the dismantling of the zero-COVID policy, fueling international concern and prompting some countries to impose curbs on travelers from China.

“After the end of this lockdown, we don’t have to scan the health code any more, nor do we have to check the travel code,” said one of those in the park, Yang, who gave only one name.

Also at the lake was Zhong, a 22-year-old college student, who said he had stayed home for two or three weeks after getting infected.

“Now I can go out and it’s good timing for the New Year’s Day holiday,” he said. “I want to go around in Beijing, have a look and feel the festive mood.”

Monday was a public holiday but traffic in the capital has built up again in the last few days as people flock to outdoor sites, although business is still slow in some smaller, confined locations, such as restaurants.

The owner of a Beijing seafood restaurant said patrons had not returned to full strength.

“I expect this situation to linger through the Lunar New Year holiday,” said Chen, who gave only his surname. “I am counting on business to be more normal after the holiday.”

In the central city of Wuhan, where the pandemic began three years ago, people were not as anxious any more, a man surnamed Wu told Reuters.

“Work production, life and entertainment are all getting back to normal levels,” said Wu, a tutor at a private training center.

During the New Year’s holiday period, 52.7 million domestic tourist trips were made, an increase of 0.44% over the same period a year earlier and up 42.8% over the corresponding period in 2019, according to government data posted on Monday.

As expectations for holiday travel grow, authorities at Tibet’s spectacular Potala Palace said it would open for visitors from Jan 3, after shutting last August due to a COVID-19 outbreak.

Some hotels in the southern tourist resort of Sanya are fully booked for Lunar New Year, media have said.

In recent days state media have sought to reassure the public that the COVID-19 outbreak was under control and nearing its peak.

Infections in the cities of Beijing, Guanzhou, Shanghai and Chongqing are close to ending, news outlet Caixin said on Sunday, January 1, citing researchers.

But infections will peak in the urban regions of Sichuan, Shaanxi, Gansu and Qinghai in the latter half of January, they added.

More than 80% of those living in southwestern Sichuan have been infected, the province’s Center for Disease Control and Prevention has said.

But Monday’s single new COVID death – flat from the previous day – among China’s population of 1.4 billion does not match the experience of other countries after they reopened.

The official death toll of 5,250 since the pandemic began compares with more than 1 million in the United States. Chinese-ruled Hong Kong, a city of 7.4 million, has reported more than 11,000 deaths.

About 9,000 people in China are probably dying each day from COVID, health data firm Airfinity said last week, while cumulative deaths since December 1 have probably reached 100,000, with infections at 18.6 million.

Airfinity, which is based in Britain, expects China’s COVID cases to reach their first peak on January 13, with 3.7 million daily infections.

China has said it only counts deaths of COVID patients caused by pneumonia and respiratory failure as being related to COVID. The relatively low death count is also inconsistent with rising demand reported by funeral parlors in several cities.

Qatar on Monday joined a growing list of countries, including the United States, India and others, which have imposed COVID tests for travelers from China over concerns about the scale of the new outbreak and skepticism over Beijing’s health statistics.

European Union government health officials will hold talks on Wednesday, January 4, on a coordinated response to the surge in COVID-19 infections in China, the Swedish EU presidency said on Monday, after December talks concluded with no decisions on the matter. – Rappler.com