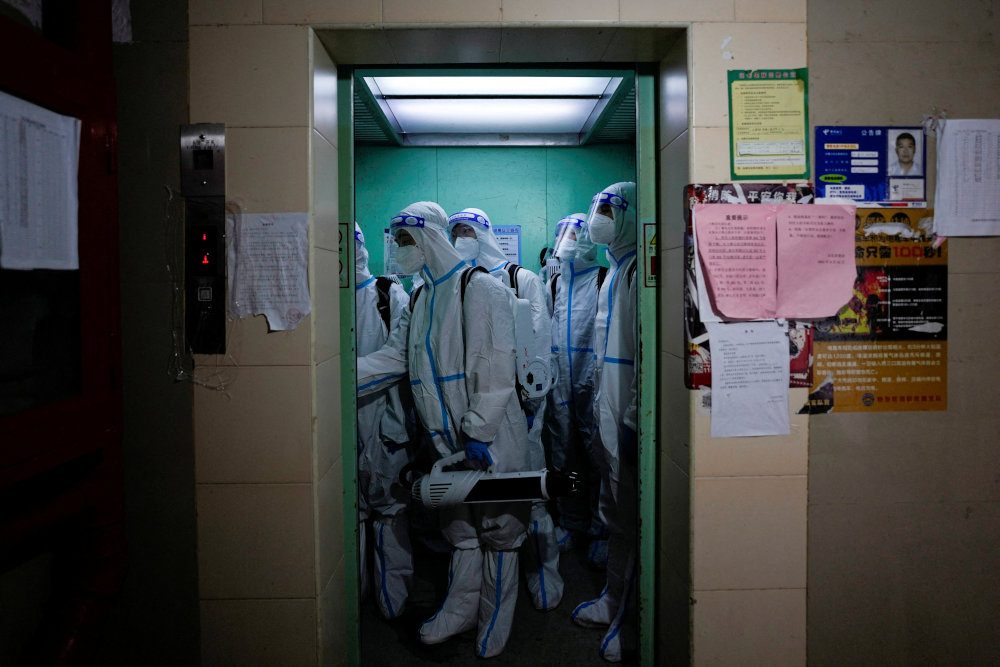 SHANGHAI LOCKDOWN. Workers in protective suits take an elevator as they disinfect a residential area during lockdown, amid the coronavirus disease (COVID-19) pandemic, in Shanghai, China, on May 18, 2022.

Facebook Twitter Copy URL
Copied
Shanghai achieves a fourth consecutive day without any new infections in the community, holding on to its prized 'zero COVID' status and keeping alive hopes for an imminent end to lockdown misery

Health authorities in Shanghai faced “huge” pressure to keep China’s most populous city free of COVID-19 as residents were counting down the days until June 1 and the end of their lockdown after almost two months of isolation.

The commercial hub of 25 million achieved a fourth consecutive day without any new infections in the community, holding on to its prized “zero COVID” status and keeping alive hopes for an imminent end to lockdown misery.

Despite no new cases, authorities are not lifting the lockdown immediately, instead gradually easing restrictions until June 1, with some shops allowed to open this week and public transport expected to partly resume over the weekend.

Residents at housing compounds across Shanghai have been given passes that allow one person from each household to go out for a few hours at a time. Some can go out only twice a week and only within a few streets of their home.

To get into a supermarket, they also need a pass from the shop.

“The risk of finding positive infections among risk groups still exists and the pressure of… preventing a rebound remains huge,” Zhao Dandan of the municipal health commission told reporters on Wednesday.

The government of Shanghai’s Xuhui district posted pictures on its social media account of workers planting flowers alongside largely deserted streets to ensure a “clean and beautiful” environment for the “resumption of work and production in the city”.

But in the central district of Changning, big piles of trash spilled onto the roads in a sign of how the city has struggled to maintain services during the lockdown.

As part of the gradual reopening, Shanghai authorities issued a list of 864 financial institutions that can resume work, three sources with knowledge of the matter said.

Social media posts have shown long queues of people, most of them migrant workers, outside one of the city’s main railway stations, looking to return to their home towns after getting permission to go outside.

Some have been photographed hauling suitcases on rented bikes or making long walks from distant corners of the city.

The United States, Europe and other regions have lifted restrictions to “live with the virus” and get their economies going even as infections spread.

But China has chosen a radically different path, ruthlessly restricting movement and isolating people to end any outbreak, no matter the economic cost.

Defeating the highly transmissible Omicron variant has proven an uphill battle, as the struggle in the capital, Beijing, over the past month has shown.

Beijing authorities have been discovering dozens of new cases almost every day since April 22.

While most Beijing residents are working from home, they can at least wander about outside, albeit with few places to go, as many shops, gyms and other businesses have closed in several districts.

“I’m happy that we are not confined at home like in Shanghai but still pretty frustrated at what’s happening, as most of the countries have already moved on from COVID,” said Lin Cong, 27, who lives in Chaoyang district, the epicentre of the outbreak.

Overall, Shanghai reported fewer than 1,000 new cases for May 17, none from outside a quarantined area. Beijing reported 69 cases, up from 52.

China’s uncompromising strategy to fight COVID has placed hundreds of millions of people in dozens of cities under restrictions of some kind and disrupted a global rebound in production of everything from mobile phones to electric vehicles.

Companies from Apple to Tesla have taken a hit.

E-commerce group JD.com said on Tuesday it was cautious about its outlook, because consumers were losing income and confidence and logistics have been disrupted.

Still, investor sentiment towards JD.com and its peers has improved on comments Vice Premier Liu He made at a Tuesday meeting with tech executives, which fanned hopes that a regulatory crackdown on the sector was easing.

The unprecedented crackdown, which began in 2020, has hit technology companies and roiled markets, shaving billions of dollars in market value, and weighing heavily on an important growth driver.

A more free-wheeling tech sector would not, however, make up for the headwinds China is facing from COVID, a property sector downturn, geopolitics and rising borrowing costs in the United States and elsewhere.

New-home prices fell in April for the first time since December, data showed on Wednesday.

This week, data showed consumption and factory output falling in April at a pace unseen since early 2020, as COVID, first detected in Wuhan city in late 2019, was beginning its global spread.

China is likely to struggle to stage a quick recovery without compromising on its “zero COVID” policy, analysts say. – Rappler.com