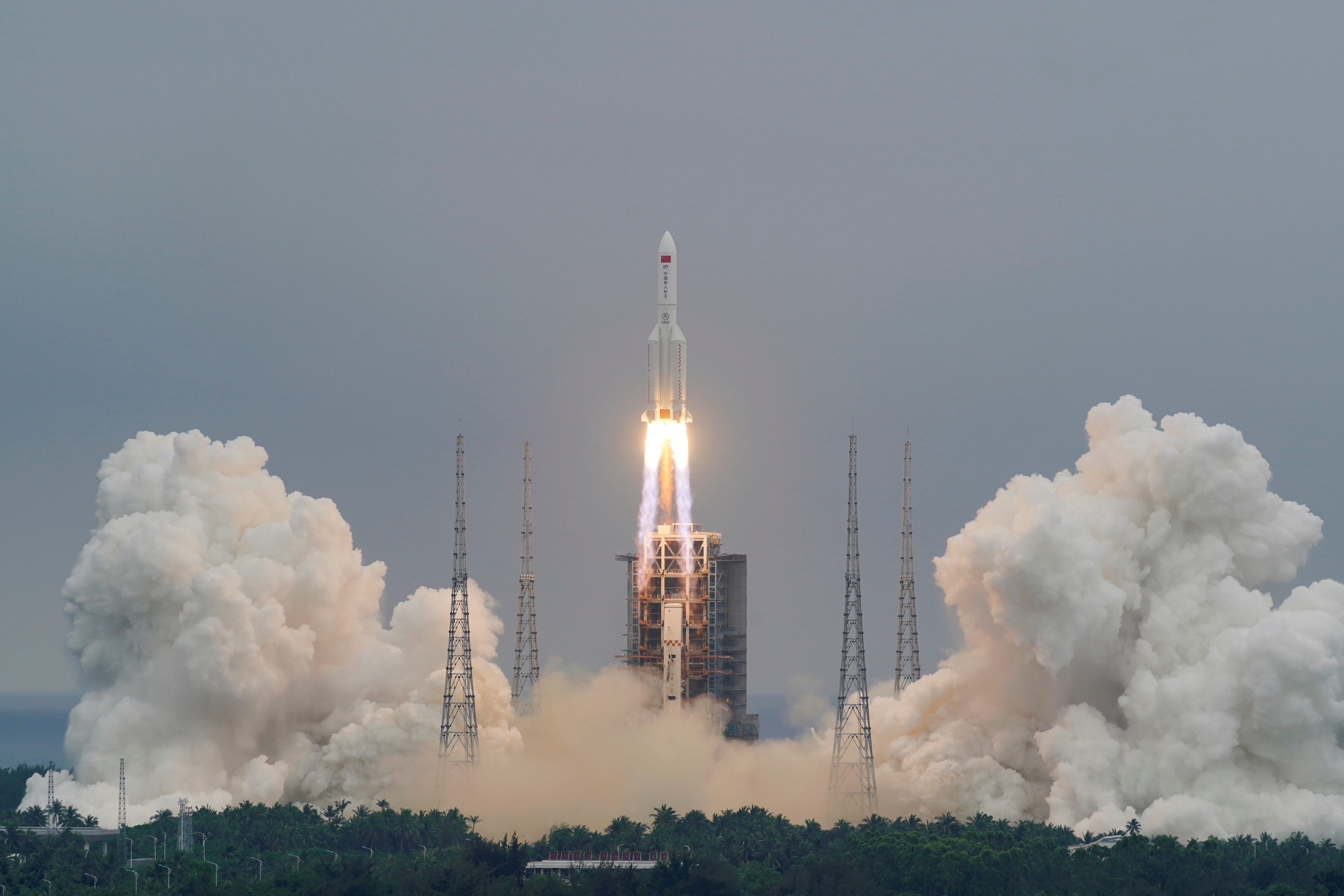 Photo by China Daily via Reuters

Remnants of China’s biggest rocket landed in the Indian Ocean on Sunday, May 9, with most of its components destroyed upon re-entry into the atmosphere, ending days of speculation over where the debris would hit but drawing US criticism over lack of transparency.

The coordinates given by Chinese state media, citing the China Manned Space Engineering Office, put the point of impact in the ocean, west of the Maldives archipelago.

Debris from the Long March 5B has had some people looking warily skyward since it blasted off from China’s Hainan island on April 29, but the China Manned Space Engineering Office said most of the debris was burnt up in the atmosphere.

State media reported parts of the rocket re-entered the atmosphere at 10:24 a.m. Beijing time (0224 GMT) and landed at a location with the coordinates of longitude 72.47 degrees east and latitude 2.65 degrees north.

The US Space command confirmed the re-entry of the rocket over the Arabian Peninsula, but said it was unknown if the debris impacted land or water.

“The exact location of the impact and the span of debris, both of which are unknown at this time, will not be released by U.S. Space Command,” it said in a statement on its website.

The Long March was the second deployment of the 5B variant since its maiden flight in May 2020. Last year, pieces from the first Long March 5B fell on Ivory Coast, damaging several buildings. No injuries were reported.

“Spacefaring nations must minimize the risks to people and property on Earth of re-entries of space objects and maximize transparency regarding those operations,” NASA Administrator Bill Nelson, a former senator and astronaut who was picked for the role in March, said in a statement after the re-entry.

“It is clear that China is failing to meet responsible standards regarding their space debris.”

With most of the Earth’s surface covered by water, the odds of populated area on land being hit had been low, and the likelihood of injuries even lower, according to experts.

But uncertainty over the rocket’s orbital decay and China’s failure to issue stronger reassurances in the run-up to the re-entry fuelled anxiety.

“It is critical that China and all spacefaring nations and commercial entities act responsibly and transparently in space to ensure the safety, stability, security, and long-term sustainability of outer space activities,” Nelson said.

Harvard-based astrophysicist Jonathan McDowell told Reuters that the potential debris zone could have been as far north as New York, Madrid or Beijing, and as far south as southern Chile and Wellington, New Zealand.

Since large chunks of the NASA space station Skylab fell from orbit in July 1979 and landed in Australia, most countries have sought to avoid such uncontrolled re-entries through their spacecraft design, McDowell said.

“It makes the Chinese rocket designers look lazy that they didn’t address this,” said McDowell.

The Global Times, a Chinese tabloid, dismissed as “Western hype” concerns the rocket was “out of control” and could cause damage.

“It is common practice across the world for upper stages of rockets to burn up while reentering the atmosphere,” Wang Wenbin, a spokesman at China’s foreign ministry, said at a regular media briefing on May 7.

“To my knowledge, the upper stage of this rocket has been deactivated, which means most of its parts will burn up upon re-entry, making the likelihood of damage to aviation or ground facilities and activities extremely low,” Wang said at the time.

The rocket, which put into orbit an unmanned Tianhe module containing what will become living quarters for three crew on a permanent Chinese space station, will be followed by 10 more missions to complete the station by 2022. – Rappler.com