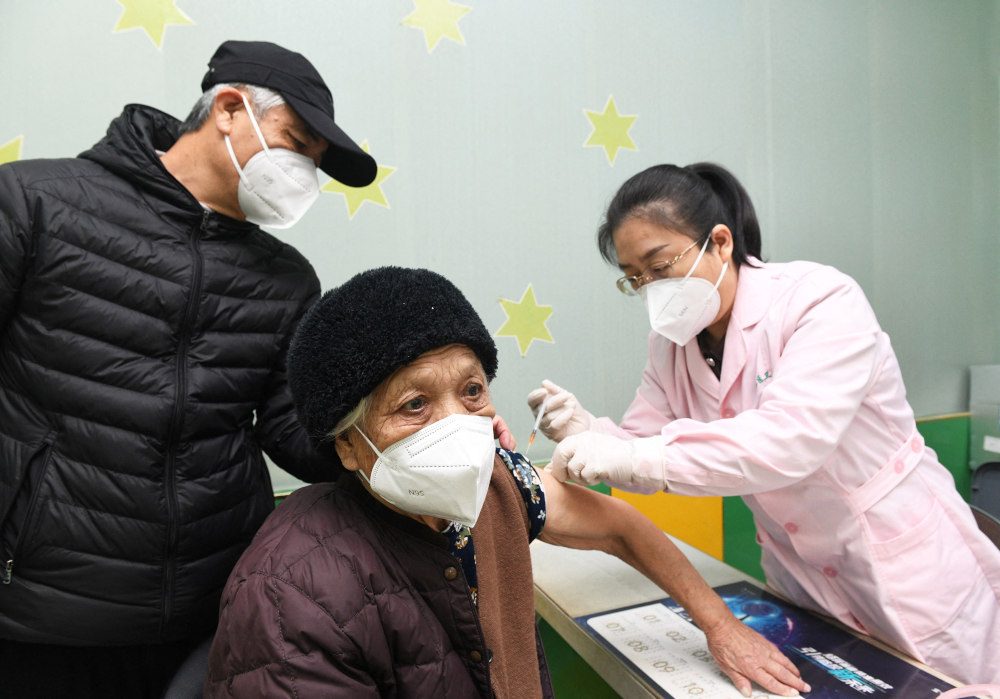 GETTING VACCINATED. A medical worker administers a dose of the vaccine against coronavirus disease (COVID-19) to an elderly person at a community health service center in Shijiazhuang, Hebei province, China on December 12, 2022.

People in China celebrated the withdrawal on Tuesday of a state-mandated app used to track whether they had travelled to COVID-stricken areas, in the latest loosening of some of the world’s toughest anti-virus rules.

As authorities deactivated the ‘itinerary code’ app at midnight on Monday, December 12, China’s four telecoms firms said they would delete users’ data associated with the app.

“Goodbye itinerary code, I hope to never see you again,” said a post on social media platform Weibo, where netizens cheered the demise of an app that critics feared could be used for mass surveillance.

“The hand that stretched out to exert power during the epidemic should now be pulled back,” wrote another user.

For all the relief over the decision last week to begin dismantling key parts of the government’s stringent ‘zero-COVID’ policy, there are fears that China could now pay a price for having possibly protected its 1.4 billion people too well against the virus.

The potential for a surge of infections during the Chinese New Year holiday next month, when people travel across the country to be with their families, remains a danger for a population that lacks “herd immunity” and has relatively low vaccination rates among the elderly, according to some analysts.

Itinerary codes were mainly used to track domestic travel within China, while authorities also use so-called health codes that residents must scan to enter public venues in order to check whether they may have been in contact with the virus.

The moves made last week to unwind the COVID curbs included dropping mandatory testing prior to many public activities and reining in quarantine.

Long queues outside fever clinics were a worrying sign that a wave of infections is building, even though official tallies of new cases have trended lower in recent weeks as authorities rowed back testing.

While China has not announced that the health codes will be scrapped, several cities including Shanghai have said that residents are no longer required to show these codes when entering places such as shops and restaurants.

The loosening of controls has come hard on the heels of historic protests against President Xi Jinping’s signature ‘zero-COVID’ policy.

The demonstrations, which ranged from candle-lit vigils in Beijing to street clashes between angry residents and riot police in Guangzhou, were the biggest show of public discontent in mainland China since Xi came to power in 2012.

Beijing’s envoy to the United States on Monday said he believes China’s COVID-19 measures will be further relaxed in the near future and international travel to the country will also become easier.

China has all but shut its borders to international travel since the pandemic first erupted in the central Chinese city of Wuhan in later 2019. International flights are still at a fraction of pre-pandemic levels and arrivals face eight days in quarantine.

Financial hub Hong Kong, which already has less stringent border controls than mainland China, on Tuesday said it would drop a requirement for incoming travelers to avoid bars and restaurants in the first three days after their arrival.

While the lifting of controls is seen as brightening the prospects for global growth longer term, analysts say Chinese businesses will struggle in the weeks ahead, as a wave of infections create staff shortages and make consumers wary.

Analysts say the decline in reported new cases could reflect the dropping of testing requirements rather than the actual situation on the ground.

“The rapid surge of infections in big cities might be only the beginning of a massive wave of COVID infections,” said Ting Lu, Chief China Economist at Nomura.

“We reckon that the incoming migration around the Chinese New Year holiday in late January could bring about an unprecedented spread of COVID.”

Experts say China’s fragile healthcare system could be quickly overwhelmed if those fears are realised.

“I can understand,” Gao Lin, a 33-year-old financier, told Reuters on the streets on the capital. “Maybe other people are afraid or are worried about kids and grandparents health conditions. It’s a personal choice.”

China stocks edged lower on Tuesday as a recent rebound triggered by reopening hopes lost steam amid concerns of a spike in COVID-19 infections.

China’s yuan, which is down almost 9% against the dollar this year and heading for its worst year since 1994, when China unified the official and market exchange rates, was little changed on Tuesday. – Rappler.com