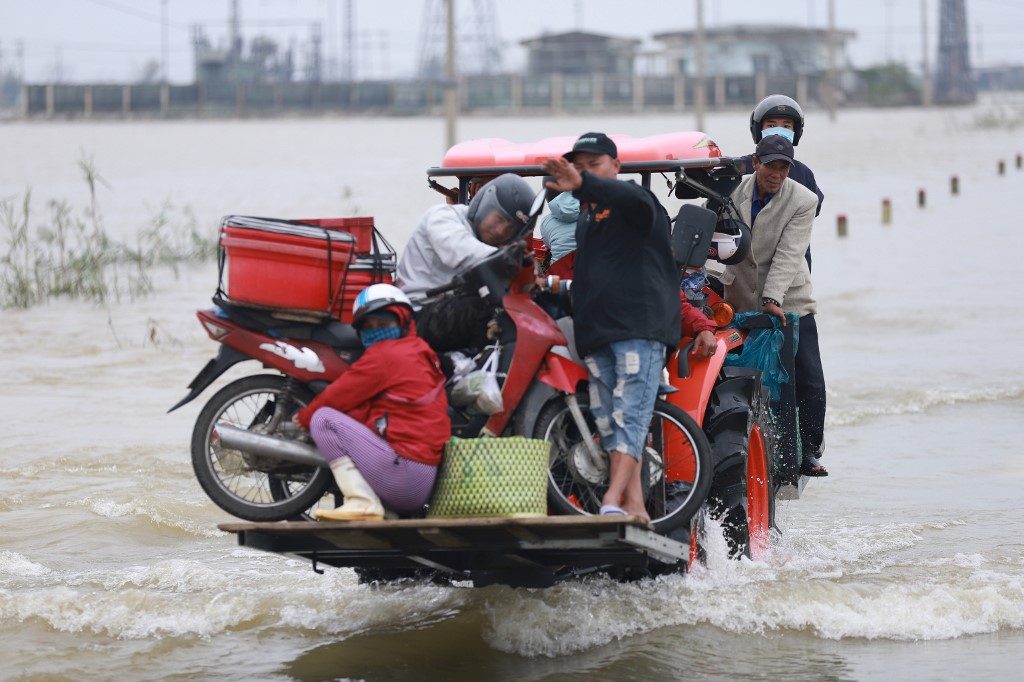 STORM VAMCO. Residents are carried on a forklift truck to dry land through flood waters brought by heavy rain from Typhoon Vamco after it made landfall in Thua Thien Hue province on November 15, 2020.

Facebook Twitter Copy URL
Copied
Based on initial reports, 5 people are injured while they were trying to secure their houses. Vamco has weakened since hitting the Philippines as a typhoon.

Storm Vamco barreled into Vietnam on Sunday, November 15, damaging buildings and injuring at least 5 people after wreaking devastation in the Philippines.

The storm made landfall on Sunday morning with winds of up to 90 kilometers per hour (56 miles per hour), according to media reports, uprooting trees and blowing the roofs off houses and schools.

Vamco is the latest in a series of storms that have pummeled Vietnam over the past 6 weeks causing flooding and landslides that have killed at least 159 people and left 70 others missing.

Initial reports from the Disaster Management Authority on Sunday said that 5 people were injured while they were trying to secure their houses.

Vamco has weakened since hitting the Philippines as a typhoon with winds of up to 155 km/hr, but state media said it had still caused significant damage, though details were not immediately available.

Authorities evacuated nearly 650,000 people from 7 coastal provinces to higher and safer ground before the storm hit to try to reduce casualties.

Philippine authorities said Sunday the death toll had risen to 67, though floodwaters are now receding, giving hope that the worst could be over.

In Vietnam, weeks of severe weather have damaged or destroyed more than 400,000 homes, according to the International Federation of Red Cross and Red Crescent Societies.

Roads and bridges have been washed away, power supplies disrupted, and crucial food crops destroyed, leaving at least 150,000 people at immediate risk of food shortages. – Rappler.com