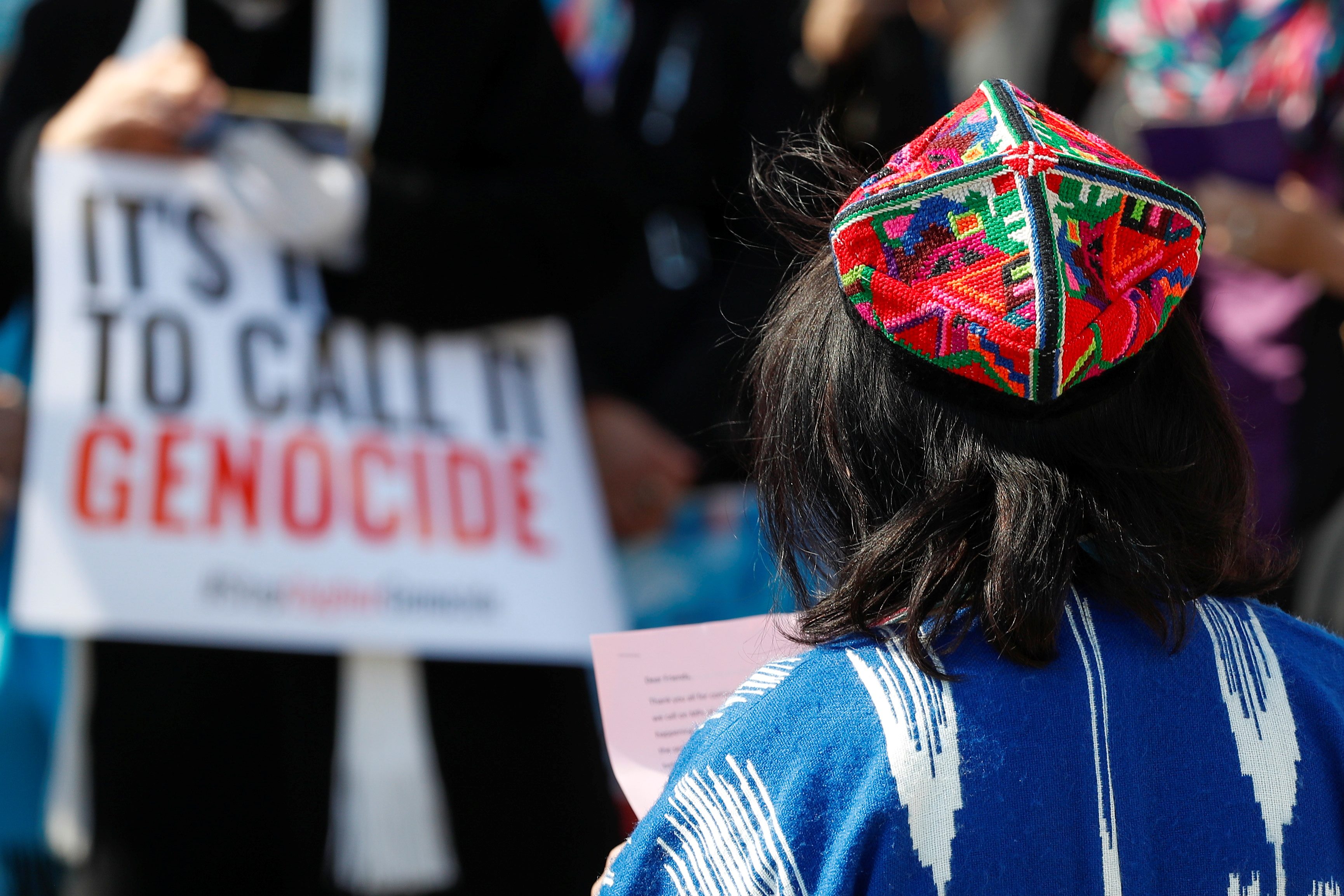 PERSECUTION. An activist addresses the protest against Uighur genocide, in London, Britain April 22, 2021.

Unwinding for the evening in her Washington DC flat, Uighur activist Jewher Ilham often has two thoughts as she turns on her laptop: What should I watch tonight? And will I be interrupted by Chinese hackers again?

From her webcam switching on by itself to her laptop’s cursor moving around as she watches Netflix, it is a bugbear Ilham has learned to live with since she started criticizing the Chinese government for detaining her father, a Uighur academic, nearly a decade ago.

“When I’m bored, I talk to my laptop and I wave and say, ‘Hi, are you watching me? Actually, you shouldn’t waste your time on me because I have really nothing important or interesting for you to dig into,'” the 26-year-old labor activist said.

Ilham is part of a growing chorus of young Uighurs living overseas who are mobilizing online and using social media to campaign against forced labor in China’s northwestern Xinjiang province, home to the Uighur Muslim minority.

Despite living abroad, many believe expanding their digital footprint through their online activism has made them – and their families – more of a target.

“I do feel conflicted every single day. If I speak up about my dad, would they torture my dad? Is it going to cause more harm?” said Ilham, who left China for the United States in 2013 and now works at the global Worker Rights Consortium.

China for months has pushed back against global criticism of its Xinjiang policies, with officials in China’s Foreign Ministry and the Xinjiang government saying the efforts are necessary to counter “lies and slander” by a network of “anti-China forces” abroad.

“There are some people hired by Western anti-China forces acting out made-up stories to smear Xinjiang and China abroad and make a living out of it,” the Chinese embassy in Washington said in an emailed reply to questions about surveilling Uighurs.

In March, Facebook Inc said it had blocked a group of hackers in China who used the platform to target Uighurs living overseas by infecting their devices with malware that would enable surveillance.

The social media giant said there were fewer than 500 targets, who were mainly from the Xinjiang region but primarily lived in other countries including Turkey, Kazakhstan, the United States, Syria, Australia, and Canada.

“The internet is a very powerful tool. Without it, our cause wouldn’t be where it is. But once your name or your face is in the public domain, you become a target,” said Zumretay Arkin, 27, whose family moved to Canada from Xinjiang when she was a child.

“I know that it has consequences. But I’m also thinking about the Uighurs who are detained, and my family members who have disappeared. At the end of the day, even if you’re silent, your relatives are going to be targeted anyway,” said Arkin, who works at the World Uyghur Congress.

United Nations experts and rights groups say China has detained over a million Uighurs and other ethnic minorities in Xinjiang since 2017, with reports of torture, enforced disappearances, forced labor, sexual violence and other abuses. China denies any human rights abuses in Xinjiang and says its camps provide vocational training and are needed to fight extremism.

Maya Wang, a senior researcher at Human Rights Watch, said the Chinese government has been keeping a close eye on the Uighur diaspora.

“These young Uighur people outside of China are very right – they are being very closely monitored,” she said.

“When they advocate for their families, they don’t really know if by speaking out they are causing more harm than good. It is a moral dilemma that is very difficult for someone to bear.”

Researcher Darren Byler from the University of Colorado in Boulder said the Uighur diaspora – which human rights groups estimate comprises more than 1 million people – have become more vocal about their plight in the past five years, when news of the camps emerged and they lost contact with loved ones.

“Most Uighurs in diaspora now realize it’s impossible to go back. They will likely be detained upon arrival. The finality of their exile is what’s prompted many to speak more openly,” said Byler, who has researched Uighur society in Xinjiang.

“The state is trying to surveil them and they, in turn, are surveilling the state. The internet allows people to… push back in real time.”

Some young Uighurs in Western countries say they feel safe going to protests or using digital platforms like Twitter and Clubhouse to criticize the Chinese government – something their older relatives could not do for fear of repercussions.

Born into a tight-knit Uighur community in Adelaide in Australia, 21-year-old Adila Yarmuhammad said she has a responsibility to speak up, even though she believes her local community is being monitored.

“I do believe that if anything did happen to me or any Uighur in Australia, we would have that safety. That’s why a lot of us, especially us youth, aren’t scared to do this,” the university student said.

‘Part of my life’

Several young Uighurs living abroad told the Thomson Reuters Foundation they have received threats over the phone and in emails, are relentlessly harassed on social media, and have also been physically spied on.

Alerk Ablikim, a 22-year-old activist whose father was detained in 2017, said he has received threatening emails and has answered cold calls only to hear disturbing screams.

Ablikim, who lives in the Netherlands, said he was concerned that publicly speaking with politicians and the media about Uyghurs could have serious ramifications for his father – that is, if he is still alive.

“I can imagine that he may be suffering because of my actions. And that’s a realisation that I have to live with. It pains me. But I hope he sees that this is important and he is proud of me,” he said.

“It’s a dilemma for me. Either I speak out and try to change the world, even a little bit, or I don’t. And the consequences of both is that our people will be locked up.” – Rappler.com