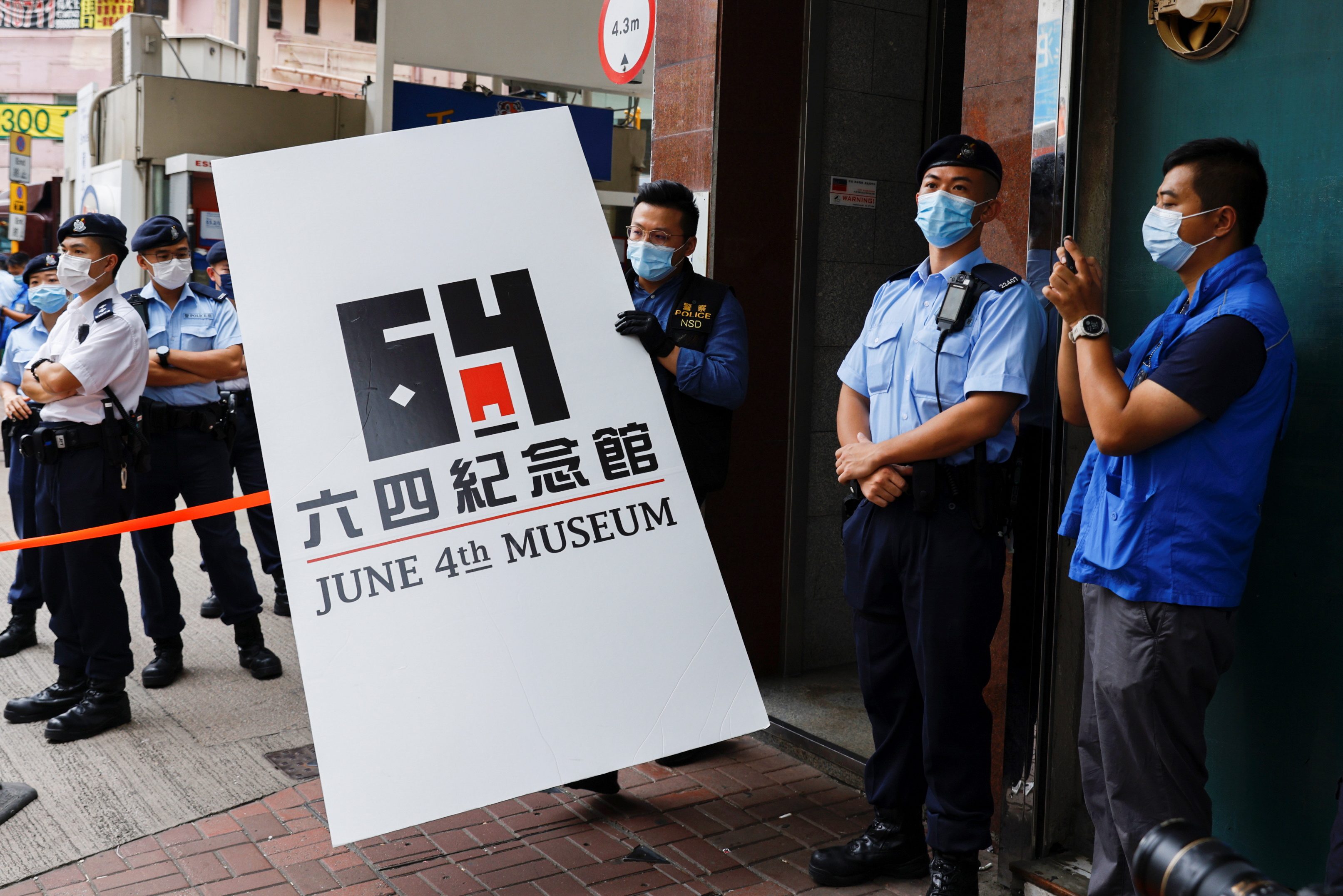 RAID. Police collect a board from the June 4th Museum, which commemorates the 1989 Tiananmen Square crackdown, as they search the museum after four members of the Hong Kong Alliance in Support of Patriotic Democratic Movements in China were arrested, in Hong Kong on September 9, 2021.

Hong Kong police on Thursday, September 9, raided the premises of the closed June 4th Museum, dedicated to the victims of China’s 1989 crackdown on pro-democracy protesters in and around Beijing’s Tiananmen Square.

The raid came hours after a dozen pro-democracy activists pleaded guilty of knowingly participating in an unauthorized assembly during last year’s June 4 anniversary, when rallies were banned by police, citing the coronavirus.

The 2021 vigil was banned for similar reasons.

The reason for the raid was unclear. Police did not immediately reply to a request for comment. Officers were seen loading a truck with cardboards, including one with the museum’s logo and another carrying a picture of a lit candle.

On Wednesday, police arrested four members of the Hong Kong Alliance in Support of Patriotic Democratic Movements in China, the group that organizes the annual rallies, including vice-chairwoman Chow Hang Tung.

Police sent a letter to the alliance in August requesting information about its membership, finances and activities by Sept. 7, according to a copy the group sent to reporters.

The letter accused the alliance of being “an agent of foreign forces.” The group said it would not provide the information requested. Wednesday’s arrests were for failing to comply with national security law requirements.

In August, the group said the museum, which closed on June 2 due to an investigation by the Food and Environmental Hygiene Department into its licensing, reopened online as “8964 Museum”. The online museum operates independently from the alliance, it said.

The former British colony, which returned to Chinese rule in 1997 with a promise its wide-ranging freedoms would remain intact, traditionally holds the largest June 4 vigil to commemorate the victims of the crackdown.

Mainland China bans commemorations and heavily censors the topic. China has never provided a full account of the 1989 crackdown. The death toll given by officials days later was about 300, most of them soldiers, but rights groups and witnesses say thousands of people may have been killed.

Hong Kong authorities have repeatedly denied curbing human rights and freedoms in the city and say law enforcement has been based on evidence and has nothing to do with the background, profession or political beliefs of those arrested. – Rappler.com