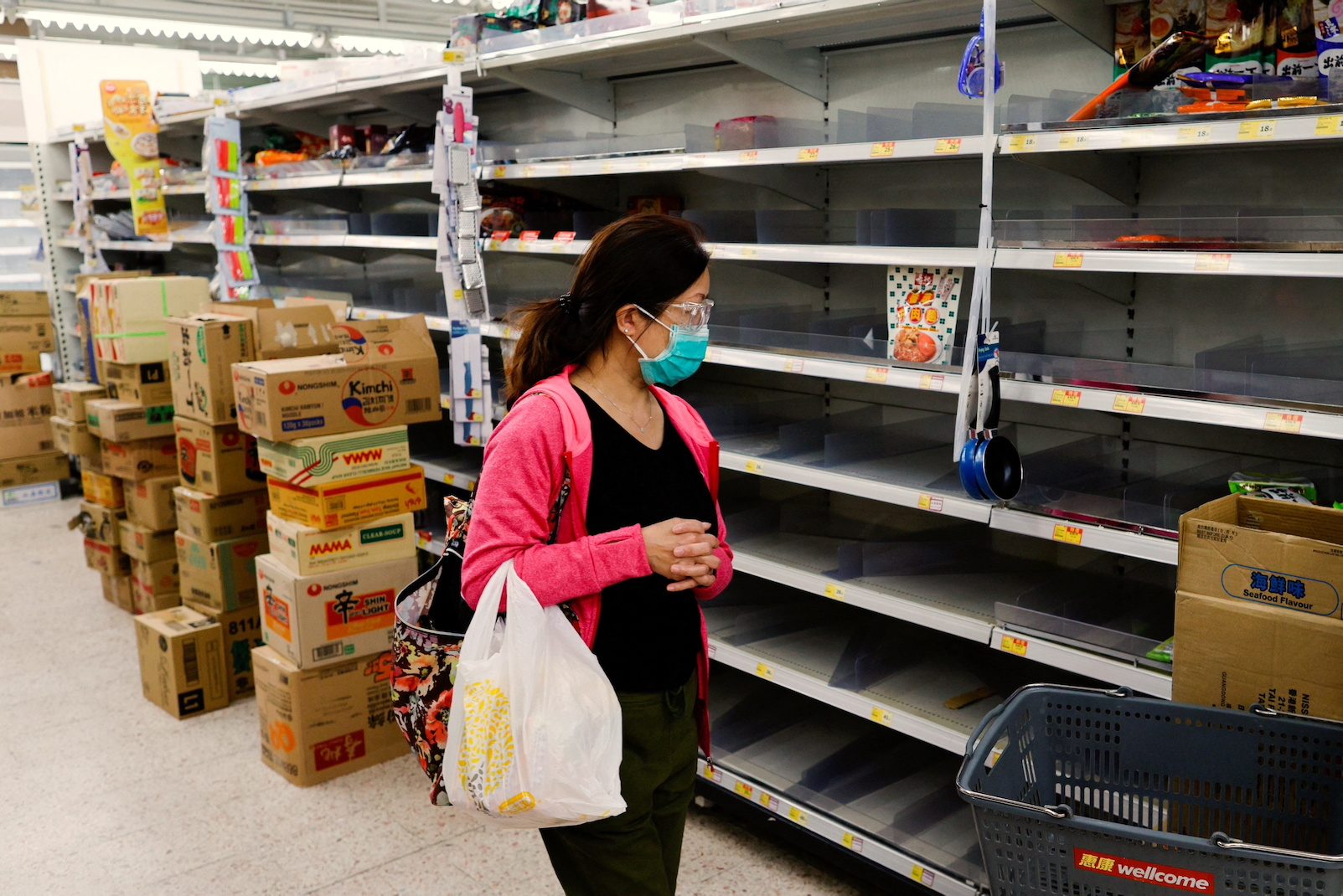 A customer wearing a face mask shops in front of partially empty shelves at a supermarket, ahead of mass coronavirus disease (COVID-19) testing, in Hong Kong, China March 4, 2022.

HONG KONG – Two of Hong Kong’s largest consumer retail chains started rationing some food and drug items on Friday, March 4, to curb panic buying that has plagued the city over the past week amid fears of a citywide lockdown as COVID-19 cases soar.

Health authorities reported 52,523 new COVID-19 cases on Friday and 136 deaths. This compares with about 100 infections at the start of February and a clean three-month streak of zero cases before the end of December.

It was the third consecutive day that the number of cases topped 50,000. The spread has limited available manpower in the health care system, and for public transport, mall operators, supermarkets and pharmacies.

Supermarket chain ParknShop announced limits of five items per customer on staples such as rice, canned food and toilet paper, while pharmacy Watsons put the same limits on medication for pain, fever and colds.

“Effective today, ParKnShoP and Watsons Hong Kong will impose purchase restrictions on selected products and medication at all stores,” Watsons said in a statement.

Both ParknShop and Watsons are units of the Hong Kong listed conglomerate CK Hutchison.

On Wednesday, ParknShop announced shorter opening hours, with some of its 200 branches shutting at 3 pm – by which time many shops across the Asian financial hub have been stripped of fresh and frozen meat and vegetables in recent days.

Mall operator HKTV said in an exchange filing on Friday that 20% of its “frontline manpower” was in quarantine.

Separately, Hong Kong’s judiciary, citing health risks, said court hearings would be suspended between March 7 and April 11, with some exceptions, including bail applications, as well as cases involving people in custody and juvenile protection.

Amid public complaints of confused official messaging, Hong Kong Chief Executive Carrie Lam has said her government had no plan for a “complete lockdown” while it plots compulsory testing of the city’s 7.4 million residents.

The government would announce details of the plan when finalized, she said.

The surge in cases and fears of a lockdown have sparked mass departures of people from the city, where authorities are clinging to a “dynamic zero” policy that seeks to eradicate all outbreaks at all costs.

Hong Kong saw a net outflow of more than 71,000 people in February, the most since the beginning of the pandemic, according to government data, compared with 16,879 in December.

On the other hand, bans on flights from nine countries including the United States, Britain and Australia are in place until April 20, leaving some residents who had left temporarily stranded, unable to get back in.

Many restaurants and shops are shuttered, while its Central financial district is eerily quiet and few people are out in
normally bustling neighborhoods.

Highlighting growing public frustration, prominent businessman and government adviser Allan Zeman said on Tuesday the city’s international reputation had been “very damaged” and alarm had been created by the confusing messages.

Hong Kong has reported about 400,000 cases of COVID since the coronavirus emerged in the Chinese city of Wuhan in late 2019 and some 1,500 deaths, far fewer than many other cities. Most infections and deaths were recorded in the past month. – Rappler.com