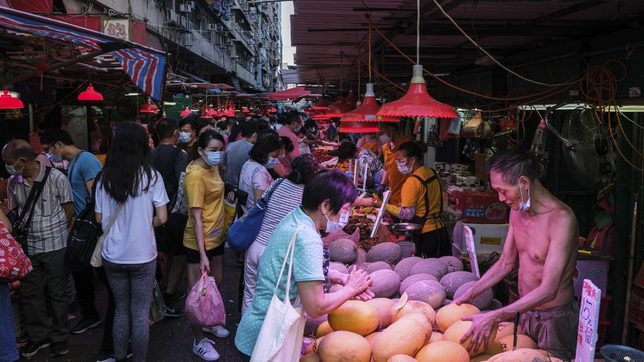 People shop for fruits and vegetables at a street market in Hong Kong on July 21, 2020. (Photo by ANTHONY WALLACE / AFP)

Hong Kong reported 113 new coronavirus infections on Wednesday, July 22, a new daily record as a sudden surge in cases shows no signs of slowing despite ramped up social distancing rules.

The finance hub was one of the first places to be struck by the virus when it emerged from central China.

But the city had impressive success in tackling the disease, all but ending local transmissions by late June.

However, infections have spiked again this month and doctors say a new outbreak is spreading out of control in the densely packed territory of 7.5 million people.

“Hong Kong is at the most critical moment,” health minister Sophia Chan said as she appealed for people to “cancel all the unnecessary outings”.

Health officials have also ordered people to wear masks on transport and, from Thursday, July 23, in all public indoor venues.

More than 800 infections had been confirmed in the last fortnight alone, more than a third since the virus hit the city.

Only 8 of the 113 new cases reported on Wednesday were imported, meaning the rest have been contracted locally.

Officials were unable to identify the transmission source in 60% of cases meaning the disease is spreading.

As hospital wards fill, officials are scrambling to build a further 2,000 isolation rooms on barren land near the city’s Disneyland resort to monitor and treat those who test positive.

Hong Kong was already mired in recession when the pandemic hit thanks to the US-China trade war and months of political unrest last year.

City leaders are keen to avoid an economically painful lockdown but have not ruled it out if the outbreak worsens. – Rappler.com