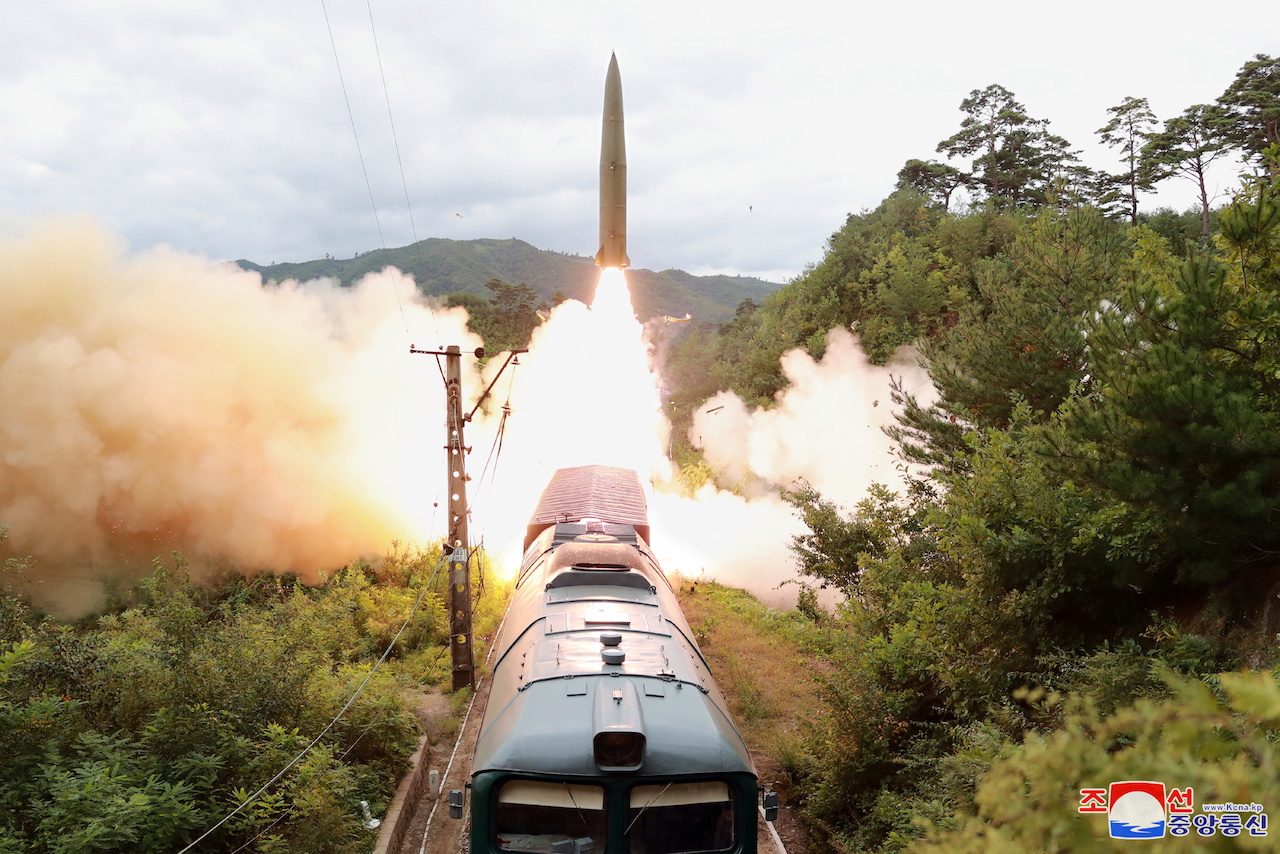 MISSILE. A missile is seen launched during a drill of the Railway Mobile Missile Regiment in North Korea, in this image supplied by North Korea's Korean Central News Agency on September 16, 2021.

Analysts warn Asia may be sliding into an accelerating arms race as countries react to China’s military growth and tensions around North Korea’s weapons programs linger.

Here is a list of defense systems several Asian countries are looking to acquire.

The country said on September 16 it would build at least eight nuclear-powered submarines under an Indo-Pacific security partnership with the United States and Britain.

Australia will also enhance its long-range strike capability with Tomahawk cruise missiles deployed on naval destroyers and air-to-surface missiles for its F/A-18 Hornet and F-35A Lightning II jets that can hit targets at a range of 900 km (559 miles).

Long-Range Anti-Ship Missiles (LRASM) will be deployed on its F/A-18F Super Hornet jets, while precision strike guided missiles capable of destroying targets from over 400 km are planned for its land forces.

It will also collaborate with the United States to develop hypersonic missiles under the trilateral security deal, dubbed AUKUS.

Separately, the U.S. State Department approved in June the potential sale of 29 Boeing Co AH-64E Apache attack helicopters to Australia in a deal worth up to $3.5 billion.

Taiwain announced a plan earlier this month to spend T$240 billion ($8.69 billion) over the next five years to upgrade its weapons capabilities – a program that is likely to include long-range missiles and existing cruise missiles.

The program will include a new missile, which Taiwanese media say could have a range of up to 1,200 km and is an upgraded version of the Hsiung Sheng cruise missile.

In 2020, the US government approved the potential sales of 100 Boeing-made Harpoon Coastal Defense Systems, three weapons systems including missiles, sensors, and artillery, and four sophisticated aerial drones to Taiwan. They are worth about $5 billion in total.

Last month, Washington approved the potential sale of 40 howitzer systems to Taiwan in a deal valued at up to $750 million.

It successfully tested a conventional submarine-launched ballistic missile (SLBM) on September 15, becoming the first country without nuclear weapons to develop such a system.

The missile is believed to be a variant of the country’s ground-based Hyunmoo-2B ballistic missile, with a flight range of about 500 km.

Last year, it developed the Hyunmoo-4 missile, which has an 800-km range and can mount a 2-ton payload.

South Korea unveiled other new missiles, including a supersonic cruise missile to be deployed soon.

It has been also striving to develop solid-fuel rocket engines as part of a plan to launch a spy satellite by the late 2020s, and successfully carried out a test firing in July.

Its defense ministry, in a midterm plan released in 2020, detailed a proposal to build three submarines. Officials have said two of them – with a displacement of 3,000 tons and 3,600 tons – will be based on diesel engines, but declined to specify how the largest one, at 4,000 tons, would will be powered.

Building a nuclear submarine has been among President Moon Jae-in’s election pledges, but he has never officially announced it after taking office in 2017. 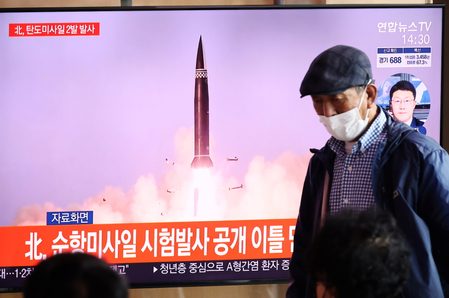 In July 2019, North Korean state media showed leader Kim Jong Un inspecting a large, newly built submarine. While it did not describe the submarine’s weapons, analysts said the apparent size of the vessel indicated it was designed to carry ballistic missiles.

Later that year, nuclear-armed North Korea said it had successfully test-fired a new SLBM from the sea, and in January it showcased a new SLBM design during a military parade in Pyongyang.

The country said on Wednesday it tested a newly developed hypersonic missile a day before, joining an accelerating race to deploy the weapon involving the United States, Russia, and China.

Hypersonic weapons are considered the next generation of arms aimed at depriving adversaries of reaction time and traditional defense mechanisms.

Unlike ballistic missiles that fly into outer space before returning on steep trajectories, hypersonic weapons can travel towards targets at lower altitudes at more than five times the speed of sound – or about 6,200 km per hour (3,853 miles per hour). It is mass producing its DF-26, a multipurpose weapon that can be fitted with nuclear warheads and has a range of up to 4,000 km.

At a 2019 parade, China also unveiled new unmanned aerial vehicles (UAVs) and showcased its advancing intercontinental and hypersonic missiles, designed to attack the aircraft carriers and bases that undergird US military strength in Asia.

Its hypersonic missile, known as the DF-17, theoretically can manoeuvre at many times the speed of sound, making it more difficult to counter.

It also has DF-41 intercontinental ballistic missiles, the backbone of China’s nuclear deterrent, which are capable of reaching the United States with multiple warheads.

It has spent millions of dollars on long-range air-launched weapons, and is developing a new version of a truck-mounted anti-ship missile, the Type 12, with an expected range of 1,000 km.

In 2020, the US State Department authorized a deal for Japan to buy 105 Lockheed F-35 fighter jets to Japan at an estimated cost of $23 billion. – Rappler.com