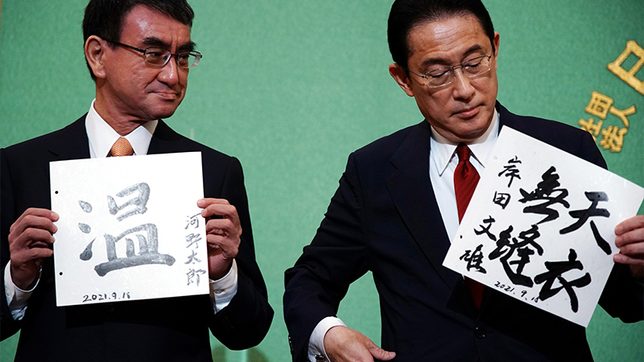 RUNOFF. In this file photo, Taro Kono, (L) the cabinet minister in charge of vaccinations, and Fumio Kishida, (R) former foreign minister, two of candidates for the presidential election of the ruling Liberal Democratic Party pose prior to a debate session held by Japan National Press Club on September 18, 2021 in Tokyo, Japan.

The top contenders to become Japan’s next prime minister, Fumio Kishida and Taro Kono, are competing in a runoff in a ruling Liberal Democratic Party (LDP) leadership vote on Wednesday, September 29, after neither obtained a majority in an initial four-way vote.

The winner of the party poll to succeed unpopular Prime Minister Yasuhide Suga, who is not seeking reelection after just one year in office, is almost certain to become premier because of its majority in parliament’s lower house.

Japan’s next prime minister must call a general election due in weeks and faces the task of rebuilding an economy staggering from the COVID-19 pandemic.

Kono, 58, a U.S.-educated former defense and foreign minister is seen as a maverick but driven by public popularity, while ex-foreign minister Fumio Kishida, 64, is saddled with a bland image but has a stronger support base from party members in parliament.

“I did all I had to do. Next is just to wait for a call,” Kono told reporters before the first round vote, according to Kyodo.

With his support in tatters ahead of the election, Suga surprisingly announced earlier this month that he would step down after only a year as the LDP leader.

With masks on, the LDP’s parliamentary members, including Suga and former prime minister Shinzo Abe, were voting in the runoff in the ballroom of a Tokyo hotel. The results of the second round of voting are expected around 3:40 pm. (6:40 GMT).

Kono has the highest numbers in public polls, but Kishida leads among lawmakers, predictions show, as senior party bosses see him more stable.

Kono is projected to obtain 39 out of 47 votes allocated to local party chapters in the runoff, public broadcaster NHK said, while Kishida is seen getting the remaining 8 votes.

A total of 429 votes are being cast in the run-off, of which 382 lawmakers and 47 local party chapters are allocated a ballot each.

The new party chief is expected to become the next prime minister as the LDP holds a majority in the parliament’s powerful lower house, but the contest has created political uncertainty in Japan with four candidates.

Last year, LDP factions rallied around Suga after Abe quit following his nearly eight-year tenure, citing ill-health. But Suga’s ratings tanked over his handling of the pandemic, prompting him to announce his departure ahead of a general election that must be held by November 28.

Grassroot LDP members and rookie lawmakers have emerged as a force in the brief campaign preceding the votes, seen more likely to be swayed by popularity ratings.

But rank-and-file members will have less say in the run-off, as the second-round vote gives greater weight to parliamentarians, potentially boosting Kishida’s chances against Kono.

A win by Kono or Kishida is unlikely to trigger a huge shift in policies as Japan seeks to cope with an assertive China and revive an economy hit by the pandemic, but Kono’s push for renewable energy and to remove bureaucratic obstacles to reform have made him appealing to investors and business chiefs.

The candidates have also clashed over cultural values, with Kono favoring legal changes to allow same-sex marriage and separate surnames for married couples, both anathema to conservatives like Takaichi.

Kono and Kishida have pointed to the failure of Abe’s signature “Abenomics” mix of expansionary fiscal and monetary policies and growth strategy to benefit households but offered few specifics as to how to fix the flaw, while Takaichi has modeled her “Sanaenomics” on her mentor Abe’s plans.

The next prime minister will continue with expansionary economic policy “for at least another year,” as the pandemic has yet to be contained, said Ryutaro Kono, chief Japan economist at BNP Paribas. – Rappler.com