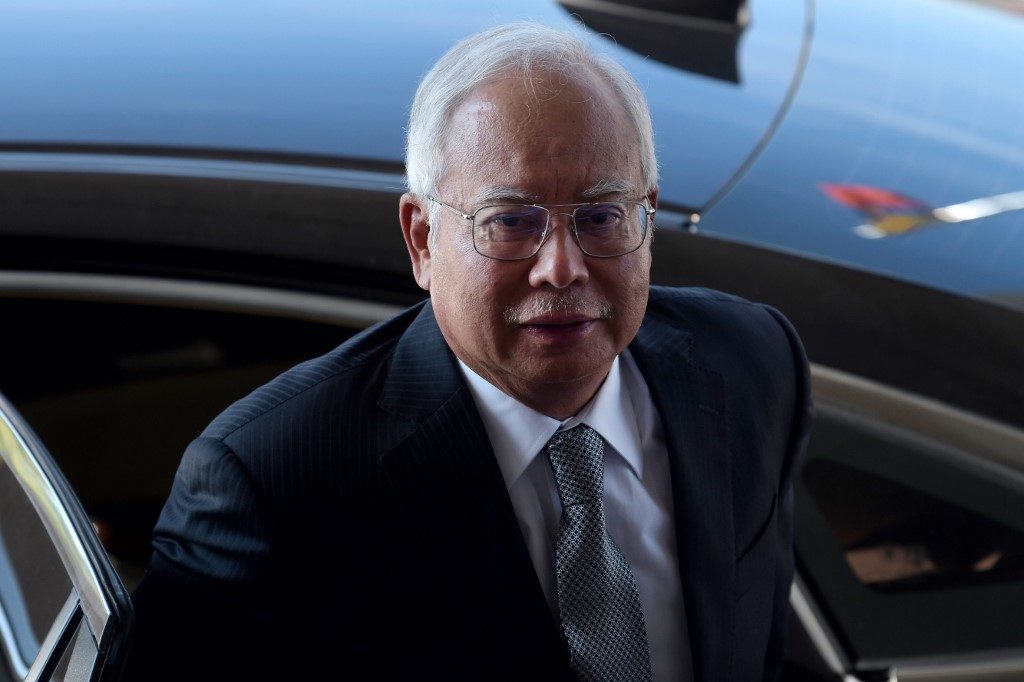 Former Malaysian leader Najib Razak was sentenced Tuesday, July 28, to 12 years in jail on corruption charges linked to the multi-billion-dollar 1MDB scandal that led to the downfall of his government two years ago.

The ex-prime minister was also fined almost $50 million after being convicted on all 7 charges in the first of several trials related to the looting of the 1Malaysia Development Berhad sovereign wealth fund.

The 67-year-old is challenging the verdict and will be allowed to remain free on continued bail until a lengthy appeals process is complete.

Billions of dollars were stolen from Malaysia’s main state investment vehicle and spent on everything from high-end real estate to pricey art.

Investment bank Goldman Sachs also became embroiled in the scandal and faces a series of hefty fines in both the US and Malaysia as a result.

Anger at the looting played a large part in the shock loss of Najib’s long-ruling coalition at elections in 2018, and he was arrested and hit with dozens of charges following his defeat.

The verdict was welcomed as a boost for Malaysia’s rule of law and came despite Najib’s political allies returning to power earlier this year as part of a coalition.

The blue-blood politician, whose father and uncle were both former Malaysian prime ministers, had vehemently denied any wrongdoing and looked calm as the verdict was handed down.

After finding him guilty on a range of charges including abuse of power, criminal breach of trust and money-laundering, the judge sentenced Najib to between 10 and 12 years on each.

The sentences will run concurrently, however, meaning he will remain behind bars for 12 years.

Addressing the court before sentence was passed, Najib read a Koranic verse and defended his record during 9 years as Malaysian premier.

But prosecutor V. Sithambaram called for a heavy punishment, saying Najib was guilty of a “gross betrayal of trust.”

“This case has tarnished the country as a kleptocracy, and the people of Malaysia don’t deserve that,” he said.

The former leader had insisted he was ignorant of the transactions from the 1MDB unit, SRC International.

The defense team portrayed him as a victim, and instead sought to paint financier Low Taek Jho – a key figure in the scandal who has been charged in the US and Malaysia – as the mastermind.

Low, whose whereabouts are unknown, maintains his innocence.

Najib’s lawyers said he was tricked by Low into believing the money was a donation from Saudi royalty, but the judge dismissed the notion as “far-fetched.”

The return of Najib’s party to power after the collapse of a reformist administration that replaced him, was quickly followed by prosecutors dropping charges against his stepson Riza Aziz, and raised concerns the ex-leader’s own cases would be influenced.

Riza allegedly also received huge sums from 1MDB, including to bankroll his Hollywood production company – which made “The Wolf of Wall Street,” starring Leonardo DiCaprio.

Analysts said the conviction would boost confidence in the new government headed by Prime Minister Muhyiddin Yassin, whose legitimacy has been questioned since took power without an election.

He will be seen as “putting country over politics, and gain support from those who wanted to see justice in case,” Bridget Welsh, a Malaysia expert from the University of Nottingham, told Agence France-Presse.

The opposition alliance “Pact of Hope” led by political heavyweight Anwar Ibrahim – who ousted Najib at the 2018 polls and reopened probes into 1MDB – declared the verdict “a huge victory for Malaysians.”

“The judicial process would not have happened if the people had not risen up to hand the ‘Pact of Hope’ victory” at the polls, the alliance said in statement.

The political ramifications could be significant, however.

The conviction could destabilize the ruling coalition, which has a razor-thin majority in parliament, if Najib and his backers withdraw support – potentially prompting a snap election.

The amounts involved in Najib’s first case are small compared to those in his second and most significant trial, which centers on allegations he illicitly obtained more than $500 million.