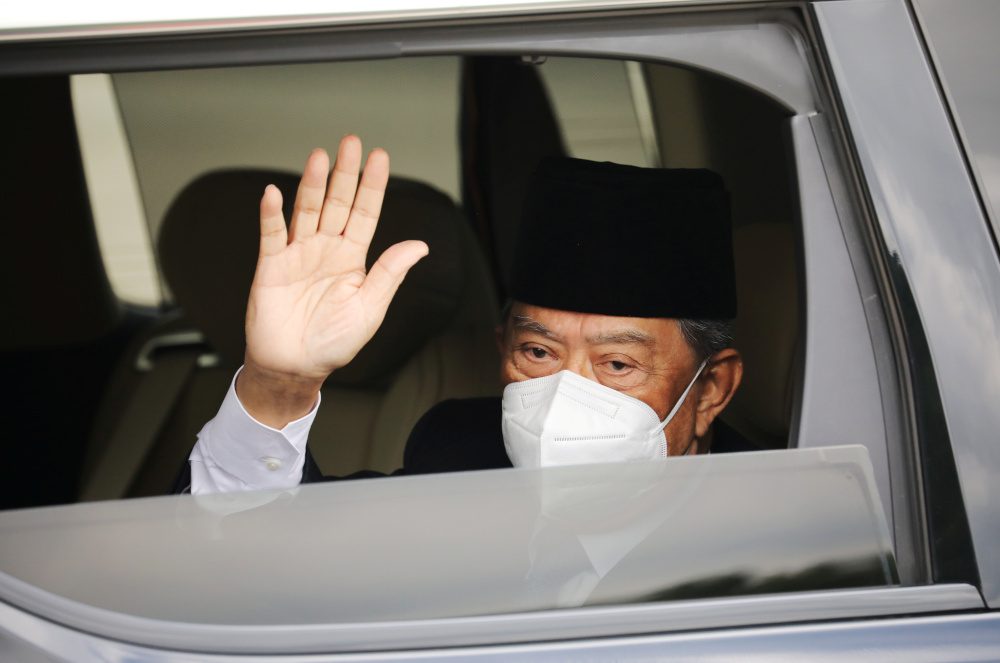 MUHYIDDIN YASSIN. Malaysian Prime Minister Muhyiddin Yassin arrives at the National Palace for a meeting with the king, in Kuala Lumpur, Malaysia August 16, 2021.

Malaysia’s Muhyiddin Yassin stepped down as prime minister on Monday, August 16, after months of political turmoil culminated in the loss of his majority, but his resignation is likely to open another chapter of instability in the absence of any obvious successor.

Muhyiddin’s resignation ends a tumultuous 17 months in office, the shortest stint of a Malaysian leader, but also hampers efforts to reboot a pandemic-stricken economy and curb a resurgence of COVID-19 infections.

The Southeast Asian nation’s king appointed Muhyiddin as the caretaker prime minister until a new premier can be found, but did not give a timeline.

King Al-Sultan Abdullah ruled out elections because of the pandemic and said he would invoke his constitutional power to appoint a prime minister he believes is likely to command a majority.

Malaysia’s ringgit currency fell to a one-year low on the news and the stock market slipped.

Muhyiddin said he resigned along with his cabinet after losing majority support in parliament.

“I hope a new government can be formed immediately so that the administration of this country is not disrupted,” he said in a televised speech.

“The next two months is crucial as we expect to achieve herd immunity in October,” he added.

Malaysia’s infections and deaths per million rank as the region’s highest in the pandemic.

It was not immediately clear who could form the next government, as no lawmaker has a clear majority in parliament. The opposition bloc and the biggest party are split on support for their prime ministerial candidates.

But the resignation is likely to return the post to the United Malays National Organisation (UMNO), Malaysia’s ‘grand old party’, which was voted out in a 2018 election after being tarnished by graft accusations, though it remained influential.

It was unclear if a new prime minister can be picked soon, said Nik Ahmad Kamal Nik Mahmod, a law expert at International Islamic University of Malaysia.

“There is no one currently who could command a majority, so they are now coercing each other to support the candidate that they are putting forward,” he said.

Muhyiddin’s grip on power had been precarious since he took office with a slim majority in March 2020, appointed by the king after joining hands with parties defeated in the 2018 polls, including UMNO.

But he has been beset by coalition infighting due to tension with UMNO, which balked at playing second fiddle, and recently withdrew its support for him.

Muhyiddin had said the recent crisis was brought on by his refusal of demands such as dropping graft charges against some individuals.

“I will never conspire with the kleptocrat group, interfere with the independence of the judiciary and turn my back on the federal constitution merely to remain in power,” he said in Monday’s speech.

UMNO politicians faced with corruption charges include former premier Najib Razak and party president Ahmad Zahid Hamidi. They have denied wrongdoing and were among those who withdrew support for Muhyiddin this month. – Rappler.com