Blasts kill 2 near office of party backed by Myanmar army 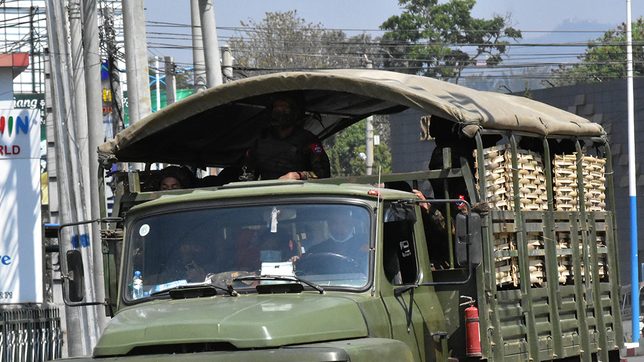 A Myanmar military truck exploded in one of two blasts near an office of an army-backed political party in the country’s biggest city on Friday, June 18, local media reported, and a senior rescue official said two people were killed and six wounded.

Blasts in towns and cities across Myanmar have recently become more common as the military struggles to impose order after its February 1 coup against Aung San Suu Kyi’s elected government.

Symbols of military rule have been key targets and the junta has blamed “terrorists” with ties to the ousted government.

Win Thu, vice chairman of Yangon Rescue Committee, said there were two explosions in the same area within a few minutes of each other, the first killing a soldier and the second killing a passenger in a taxi.

Five members of the security forces and the taxi driver were wounded, he said.

“We don’t know who did it. We just picked up the injured and dead bodies using our ambulances as requested. We sent the injured people to hospital,” Win Thu told Reuters.

There was no immediate claim of responsibility for the two blasts. A military spokesman did not answer calls seeking comment.

Local officials appointed by the junta have become targets for assassinations, many of them members of the USDP, the party created by the military before it ceded power in 2011.

The USDP filed multiple complaints of fraud with authorities after being trounced by Suu Kyi’s party in a November election. The military seized power in February, saying those complaints were valid and were ignored.

Friday’s incidents followed a blast a few kilometers away in Bahan Township on Thursday at the construction site of a luxury condominium project 68 Residence, Myanmar Now reported.

The project is owned by the husband of Thet Thet Khine, a businesswoman and former Suu Kyi ally who was appointed social welfare minister by the junta a few days after the coup.

Thet Thet Khine did not respond to calls seeking comment on Friday.