A relative sits with a coronavirus (COVID-19) patient being taken to hospital in the town of Kale, Sagaing Region, Myanmar, July 6, 2021.

Facebook Twitter Copy URL
Copied
Hospitals in Myanmar are under intense pressure even before the upsurge, with some reporting most of their medics had joined the anti-junta Civil Disobedience Movement

When Ma Yati felt weak and feverish and lost her sense of smell, she had no doubt she had COVID-19.

But even with up to 30 people a day dying of the coronavirus in her home town of Kale in western Myanmar, she decided it was better to hole up in a room at home than get an official test or enter a quarantine center.

“My trust in this junta healthcare system is 0%,” the 23-year-old told Reuters by telephone from her home, where she is now recovering and trying not to infect others.

“The quarantine center has nobody to provide care. There will be nobody to help in case of emergency,” she said. Though there are no figures to show how many, more people like Ma Yati are shunning the state health system even as COVID-19 cases multiply, fearing substandard treatment at hospitals abandoned by medics in protest at the February 1 military coup and wary of giving legitimacy to the junta by turning to it for help.

Hospitals were under intense pressure even before the upsurge, with some reporting most of their medics had joined the anti-junta Civil Disobedience Movement.

As well as increasing the risk to their own health, medics say people’s reluctance to be tested for COVID-19 or to enter quarantine could lead to more infections.

In contrast, the ousted civilian government appeared to have had more success in subduing previous waves of infections because of people’s willingness to submit to testing, tracking and isolation.

A spokesman for the military authorities said they were doing all they could and appealed for cooperation.

“There are difficulties now,” Zaw Min Tun told a news conference. “We know charity groups and people are suffering difficulties too and we want to ask them to cooperate with us.”

Neither he nor the health ministry responded to further questions on the handling of the outbreak. But one of the junta’s responses to the crisis has been to open military hospitals to the public, and step up services there.

The latest COVID-19 wave crept up on the country of 53 million after the coup against elected leader Aung San Suu Kyi. Daily protests against the junta, strikes and violence all hampered the provision of health services.

On Monday, the official death toll from COVID-19 was put at 89, the sixth day out of seven that it had hit a record. Daily cases topped 5,000 for the first time – more than double the highest figure last year. 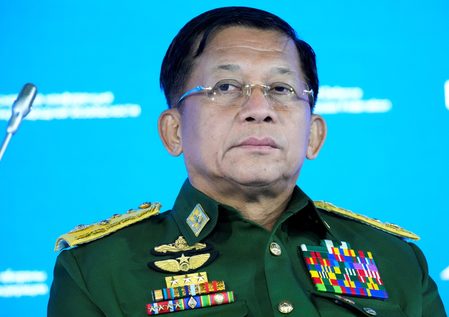 More than a third of COVID-19 tests were positive, a figure doctors say points to the outbreak being far more widespread than the official testing numbers indicate.

“The very high rate of positive cases during the past few weeks points to much more widespread infections. This is fast becoming critical as many people still have limited access to hospitals and healthcare,” he told Reuters from Myanmar.

With many medical staff joining the Civil Disobedience Movement their ability to treat patients is limited.

Only 40 of 400 health workers remained at the West Yangon General Hospital in Myanmar’s biggest city, doctors there said.

At another Yangon hospital, a 35-year-old doctor described the challenge of trying to deal with the health crisis with such inadequate resources.

“It is like picking up frogs with a torn bag,” he told Reuters, requesting anonymity out of fear that he could be shamed by supporters of the disobedience movement for returning to work, though he did so under pressure from his family.

Having been at the forefront of protests against the junta, medics have also become targets.

The World Health Organization has recorded 240 attacks on health care workers, ambulances, clinics and hospitals in Myanmar since the coup, nearly half of all such attacks recorded worldwide in that time.

The junta has urged hospital workers to return to work, but some fear arrest. They also fear being ostracized by their peers. About 70 health workers arrested since the coup are among over 5,000 current detainees, according to data from the Assistance Association for Political Prisoners activist group.

When 20-year-old medical student Khin’s parents fell sick in Yangon, she tried to treat them herself. By the time it became clear her father needed a hospital, his blood oxygen was so low that none would take him.

“We gave him oxygen, but he passed away,” she said, now worrying about her mother, who is also on supplemental oxygen.

Queues for oxygen cylinders in Yangon are one stark indicator of the scale of the latest outbreak. The junta said it had restricted supplies to individuals to avoid hoarding – rejecting accusations of trying to monopolize them.

In Southeast Asia, countries such as Thailand, Indonesia and Malaysia are also suffering their worst outbreaks, driven in part by the Delta variant first identified in India.

But opponents of the junta draw comparisons between its response and the fact that previous waves were quelled under Suu Kyi – who is now accused of contravening coronavirus protocols among an array of charges her lawyers say are nonsense.

“The health care systems and services have all but fallen to the ground in shambles due to the military’s persecution and terrorism against the people,” said Sasa, a medical doctor and spokesman for an underground National Unity Government.

Days before the coup, Myanmar had begun one of the region’s first vaccination campaigns, but it stalled amid widespread public refusal to take any help from military authorities. The former head of the vaccination campaign, Htar Htar Lin, who was appointed by the ousted civilian government, is among dozens of medics who have been arrested.

The military government said on Monday that vaccinations would now be stepped up, partly with help from its biggest foreign ally, Russia. – Rappler.com