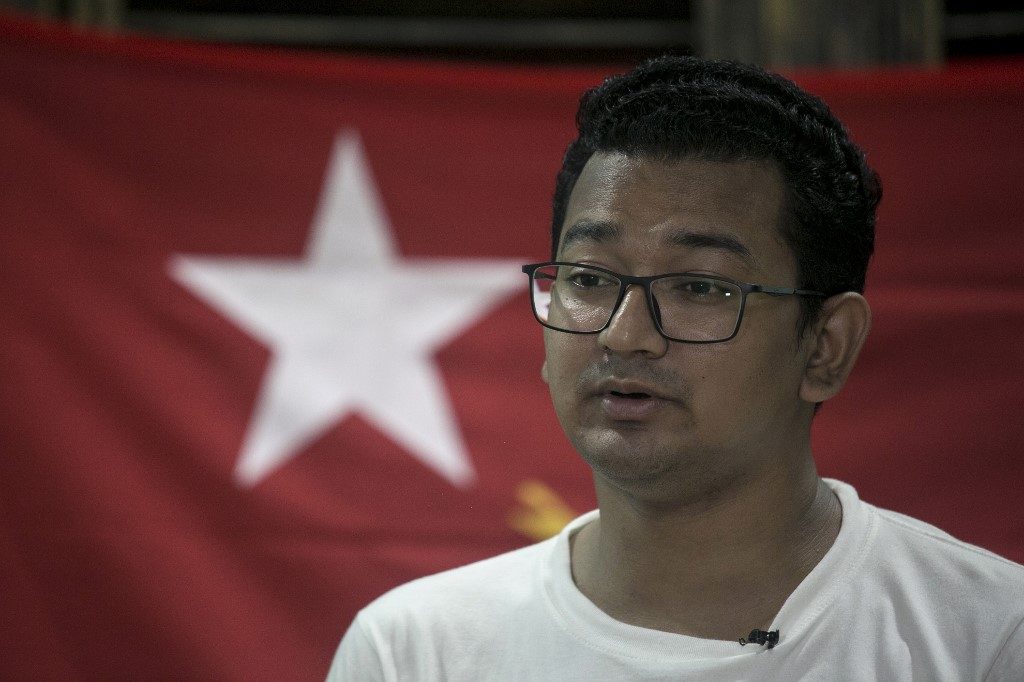 SITHU MAUNG. This photo taken on November 9, 2020 shows Sithu Maung, one of the two Muslim candidates from the ruling National League for Democracy (NLD) party, speaking to journalists during an interview at his house in Yangon. Photo by Sai Aung Main/AFP

Facebook Twitter Copy URL
Copied
Sithu Maung is one of just two Muslims out of more than 1,100 candidates for Aung San Suu Kyi's ruling National League for Democracy (NLD) party – up from zero in the last election

After 5 years without a single Muslim MP, Myanmar is in need of someone to help fight for the rights of oppressed minorities, says Sithu Maung as he celebrates his election to parliament.

The 33-year-old was one of just two Muslims out of more than 1,100 candidates for Aung San Suu Kyi’s ruling National League for Democracy (NLD) party – up from zero in the last election in 2015.

Muslims number 4% of the national population and suffer particularly high levels of discrimination.

Sithu Maung sensed victory was on the cards after seeing voters’ reactions to him at the polling station, but was overwhelmed to scoop up a decisive 80% of the vote in his downtown Yangon constituency.

“People applauded me, shouting my name from their apartments when I passed,” the 33-year-old told AFP at his modest studio flat in a crumbling colonial-era building.

Official overall results are not expected until later in the week, but the NLD is confident it has won by a landslide, prompting street celebrations from thousands of supporters despite coronavirus fears.

Sithu Maung’s constituency is one of the most ethnically diverse in the country with around 30,000 residents almost evenly divided between Buddhists and Muslims as well as Rakhine, Chinese and Indian-origin minorities.

“I’ll work for people of all religions, particularly those who are discriminated against and oppressed or deprived of human rights,” he promised.

But Sithu Maung refused to be drawn publicly on the issue of the stateless Rohingya, whose persecution in Myanmar has cast a pall over his party leader Suu Kyi in the international community’s eyes.

Military operations forced out hundreds of thousands of Rohingya Muslims in 2017 in violence that now sees the country facing genocide charges; 600,000 more remain inside Myanmar living in what rights groups brand as apartheid conditions.

Like many, Sithu Maung had to wait years to obtain an ID card that labelled him as “mixed blood” ethnicity, demoting him to different queues in government offices that make people particularly vulnerable to corruption.

“People who haven’t experienced it just can’t understand what it’s like,” he said.

With hardline Buddhist nationalist sentiment running high, he was then passed over as a potential NLD candidate for the 2015 election.

No Muslims at all were elected to parliament then.

Even in this year’s election, 23% of Muslim candidates were rejected, compared with just 0.3% for other religious groups, according to International Crisis Group watchdog.

Sithu Maung described how he was attacked from all sides when his nomination was announced.

“People spread disinformation, calling me a terrorist and saying I wanted Arabic to be taught in schools,” the MP-elect added.

“Even some Muslims criticized me, accusing me of not praying enough and of being atheist, or non-conformist.”

He said years of building up thick skin has prepared him well for his time as an MP – and he will not be the only Muslim in parliament.

Yangon-based analyst David Mathieson said he was encouraged to see the pair’s victory but said the NLD needed to address “deeply rooted discrimination against Muslims and other scapegoated minorities”.

He predicted, however, that the party’s fear this would “dilute the NLD’s support” would likely deter any attempts.

Sithu Maung is determined not just to be seen to be representing Muslims.

“If any of my constituents are ever degraded or face injustice, I’ll defend them.” – Rappler.com