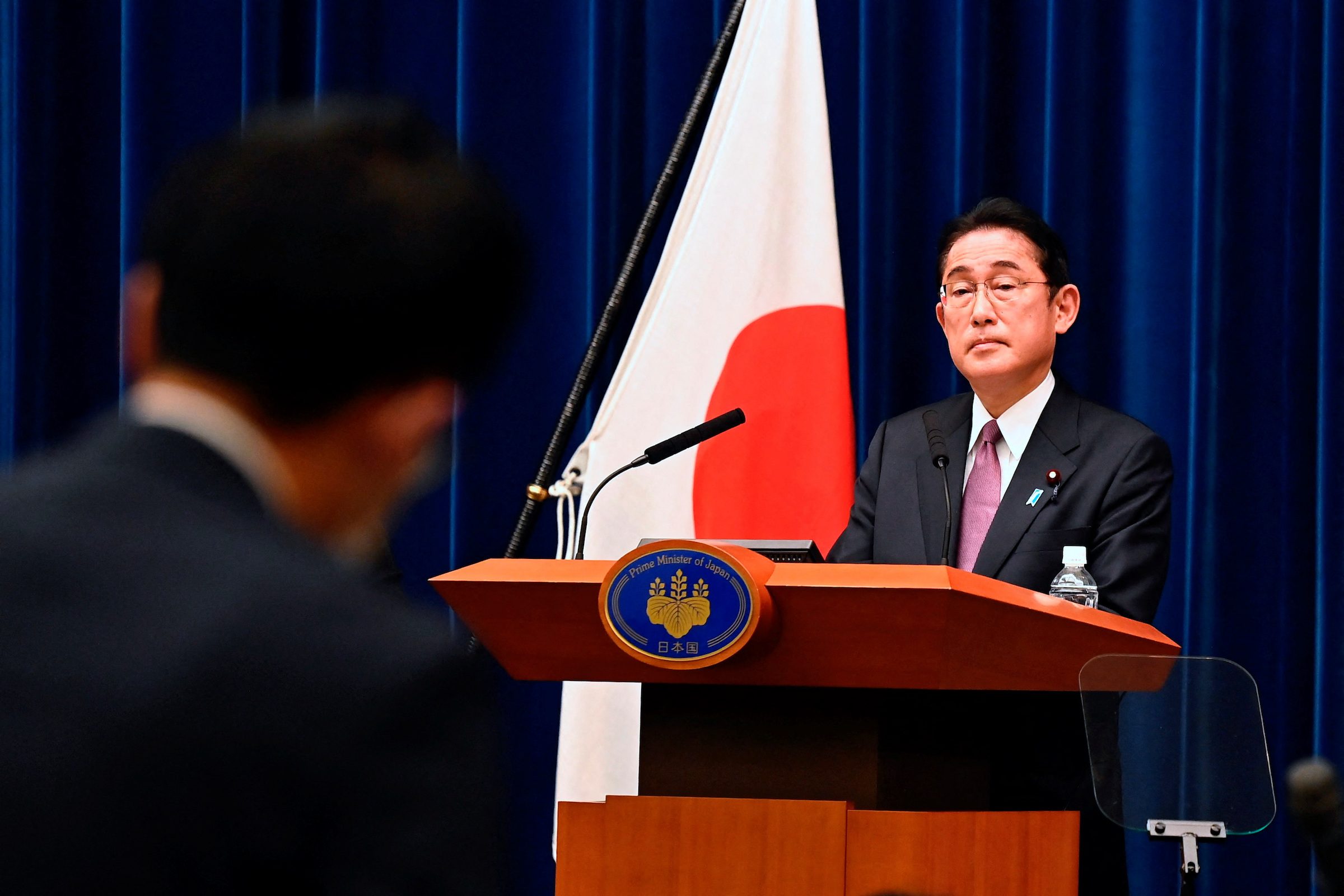 Facebook Twitter Copy URL
Copied
The sweeping, five-year plan, once unthinkable in pacifist Japan, will make the country the world's third-biggest military spender after the United States and China, based on current budgets

TOKYO, Japan – Japan on Friday, December 16, unveiled its biggest military build-up since World War II with a $320 billion plan that will buy missiles capable of striking China and ready it for sustained conflict, as regional tensions and Russia’s Ukraine invasion stoke war fears.

The sweeping, five-year plan, once unthinkable in pacifist Japan, will make the country the world’s third-biggest military spender after the United States and China, based on current budgets.

Prime Minister Fumio Kishida, who described Japan and its people as being at a “turning point in history”, said the ramp-up was “my answer to the various security challenges that we face”.

His government worries that Russia has set a precedent that will encourage China to attack Taiwan, threatening nearby Japanese islands, disrupting supplies of advanced semiconductors and putting a potential stranglehold on sea lanes that supply Middle East oil.

“This is setting a new heading for Japan. If appropriately executed, the Self-Defense Forces will be a real, world-class effective force,” said Yoji Koda, a former Maritime Self Defense Force admiral, who commanded the Japanese fleet in 2008.

The government said it would also stockpile spare parts and other munitions, expand transport capacity and develop cyber warfare capabilities. In its postwar, American-authored constitution, Japan gave up the right to wage war and means to do so.

“Russia’s invasion of Ukraine is a serious violation of laws that forbid the use of force and has shaken the foundations of the international order,” the strategy paper said.

“The strategic challenge posed by China is the biggest Japan has ever faced,” it added, also noting that Beijing had not ruled out using force to bring Taiwan under its control.

A separate national security strategy document that pointed to China, Russia and North Korea, promised close cooperation with the United States and other like-minded nations to deter threats to the established international order.

“The Prime Minister is making a clear, unambiguous strategic statement about Japan’s role as a security provider in the Indo-Pacific,” US Ambassador to Japan Rahm Emanuel said in a statement. “He has put a capital “D” next to Japan’s deterrence,” he added.

“We look forward to Taiwan and Japan continuing to creatde new cooperation achievements in various fields such as national defence and security, the economy, trade, and industrial transformation,” the presidential office cited Tsai as saying.

China accused Japan of making false claims about China’s military activities in the new security strategy, according to a statement from its embassy in Japan.

“The Ukraine war has shown us the necessity of being able to sustain a fight, and that is something Japan has not so far been prepared for,” said Toshimichi Nagaiwa, a retired Air Self-Defense Force general. “Japan is making a late start, it is like we are 200 meters behind in a 400-meter sprint,” he added.

China defense spending overtook Japan’s at the turn of the century, and now has a military budget more than four times larger. Too few munitions and a lack of spare parts that ground planes and put other military equipment out of action are the most immediate problems for Japan to tackle, military sources have told Reuters.

Kishida’s plan will double defence outlays to about 2% of gross domestic product over five years, blowing past a self-imposed 1% spending limit that has been in place since 1976.

It will increase the defence ministry’s budget to around a tenth of all public spending at current levels, and will make Japan the world’s third-biggest military spender after the United States and China, based on current budgets.

That splurge will provide work to Japanese military equipment makers such as Mitsubishi Heavy Industries (MHI), which is expected to lead development of three of the longer-range missiles that will be part of Japan’s new missile force.

Tokyo allocated $5.6 billion for that in the five-year defense program.

Foreign companies will also benefit. Japan says it wants ship-launched US Tomahawk cruise missiles made by Raytheon Technologies to be part of its new deterrent force.

To pay for that equipment, Kishida’s ruling bloc earlier on Friday said it would raise tobacco, corporate and disaster-reconstruction income taxes. But, with opposition to tax hikes within his ruling Liberal Democratic party still strong, the Japanese leader has yet to say when he will implement those higher rates. – Rappler.com