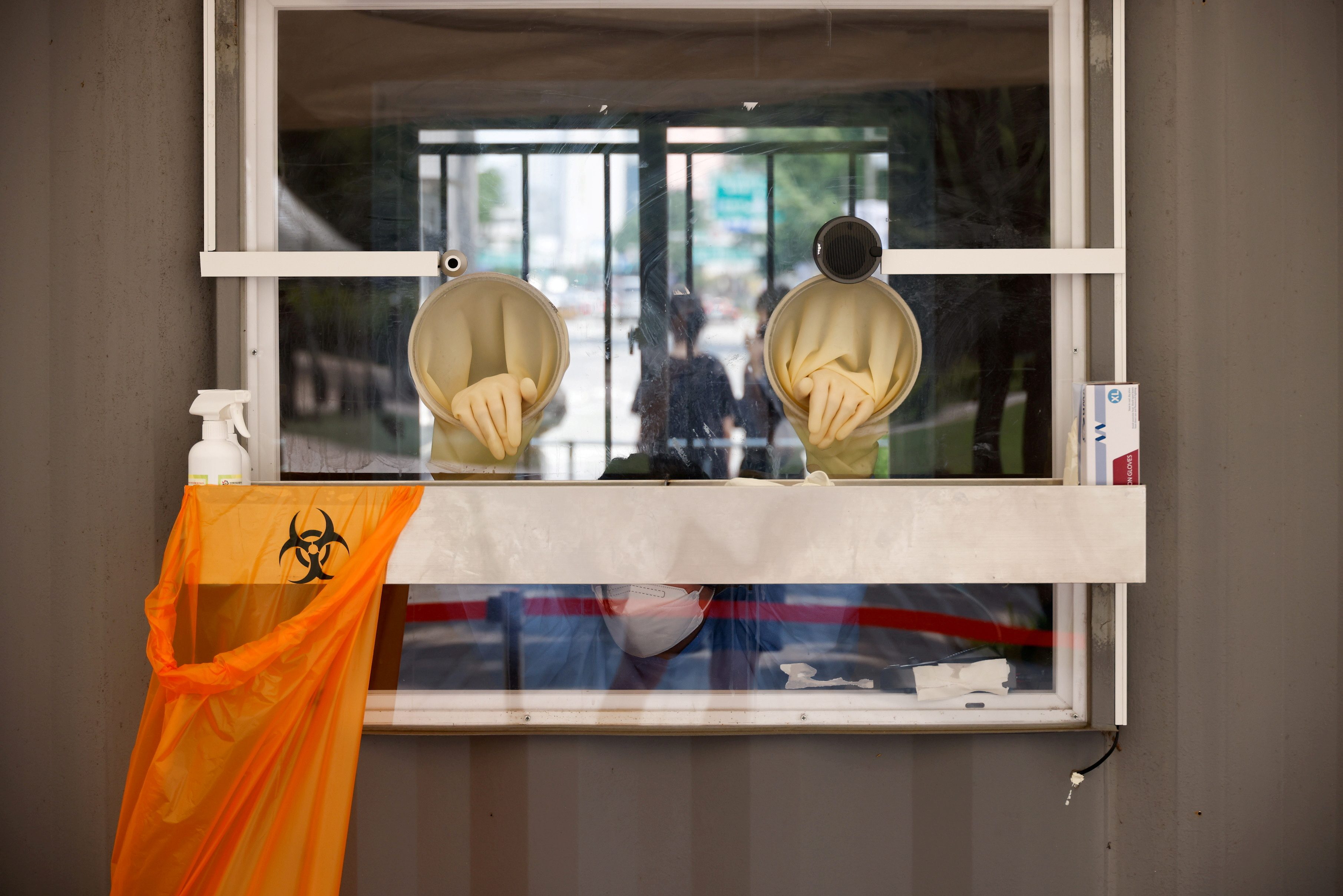 REST. A health worker rests inside a booth as she conducts a COVID-19 test at a coronavirus testing site in Seoul, South Korea, on July 15, 2021. REUTERS/Kim Hong-Ji TPX IMAGES OF THE DAY

South Korea’s prime minister on Friday, July 16, said tighter limits on private gatherings may be needed as authorities reported 1,536 new coronavirus cases and treatment centers filled up, prompting calls for more people to be allowed to receive care at home.

South Korea was for months a coronavirus success story as it kept outbreaks under control with testing, tracing and social distancing, but the more contagious Delta variant has fueled a fourth wave of infection among the unvaccinated.

Prime Minister Kim Boo-kyum asked local governments to standardize gathering limits to less than four people to avoid confusion in the non-metropolitan area, after imposing a semi-lockdown in the greater Seoul area.

“If the number of confirmed cases continues to spiral, I stress that there is no choice but to further limit the number of gatherings after 6 pm outside the metropolitan area as well,” Kim told a televised government meeting on Friday.

The government on Monday, July 12, imposed its toughest level of distancing curbs in the greater Seoul area, including a ban on gatherings of more than two people after 6 pm

About 75% of the 1,476 locally acquired cases on Thursday, July 15, were recorded in the greater Seoul area, but authorities fear summer travelers could spread the disease to regional areas where cases are rising sharply.

Authorities have reported 1,000 or more new daily cases since July 7 with a new peak of 1,615 on Wednesday, July 14, a trend the government expects to continue until mid-August.

Even so, South Korea has seen no significant increase in hospitalizations or deaths, with 171 severe cases as of Thursday. The mortality rate of 1.17% is far below levels seen during the previous peak in December.

Seoul asked the central government to allow more infected people with mild symptoms to stay at home to free up beds in hospitals and treatment centers.

Self-treatment was already an option for children below 12 or parents with children under 12, and the government was considering allowing it for adults who lived alone, health ministry official Lee Ki-Il told a briefing.

Gyeonggi province on Friday loosened its treatment rules, saying adults below 50 years of age could treat themselves at home.

Self-treated patients get remote medical consultations from professional nurses twice a day and have access to telemedicine with physicians.

South Korea has administered 31.1% of its population with at least one shot, most aged over 60 and some key frontline workers, and aims to vaccinate at least 70% by September. – Rappler.com