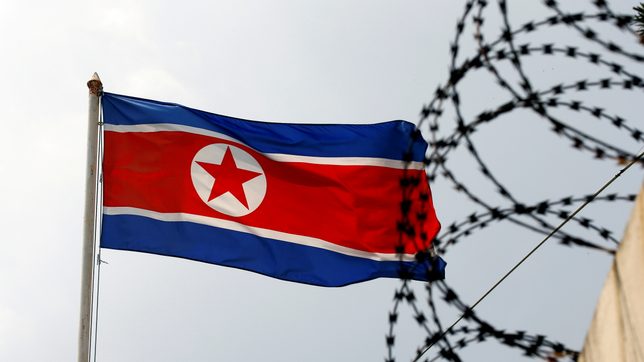 NORTH KOREA. In this file photo, a North Korea flag flutters next to concertina wire at the North Korean embassy in Kuala Lumpur, Malaysia on March 9, 2017.

Facebook Twitter Copy URL
Copied
While the allies both want North Korea to give up its nuclear weapons and end its missile program, they have at times disagreed on the approach

US Secretary of State Antony Blinken and South Korean Foreign Minister Chung Eui-yong have discussed efforts to engage with North Korea, including the prospect of humanitarian aid, their offices said on Friday, August 6.

While the allies both want North Korea to give up its nuclear weapons and end its missile program, they have at times disagreed on the approach, with South Korean President Moon Jae-in keen to build economic ties between the two Koreas while the United States has long insisted on action on denuclearization as a first step.

South Korea’s foreign ministry, in a statement on the call between Blinken and Chung, said they had agreed to hold detailed discussions on ways to cooperate with North Korea, including humanitarian cooperation, and continue to make efforts to engage with it.

“The secretary and the minister agreed to continue the coordinated diplomatic efforts…to make substantial progress toward the goal of complete denuclearization and establishment of lasting peace on the Korean Peninsula,” the ministry said.

Blinken confirmed US support for dialogue and engagement between North Korea and South Korea, the US Department of State said in a statement.

Nevertheless, South Korea officials have been encouraged by a declaration by the Biden administration, which earlier this year concluded a review of North Korea policy, that it would pursue “practical” diplomacy with North Korea. About 28,500 US troops are stationed in South Korea as a legacy of the 1950-1953 Korean War, which ended with an armistice rather than a peace treaty, leaving the peninsula in a technical state of war. – Rappler.com