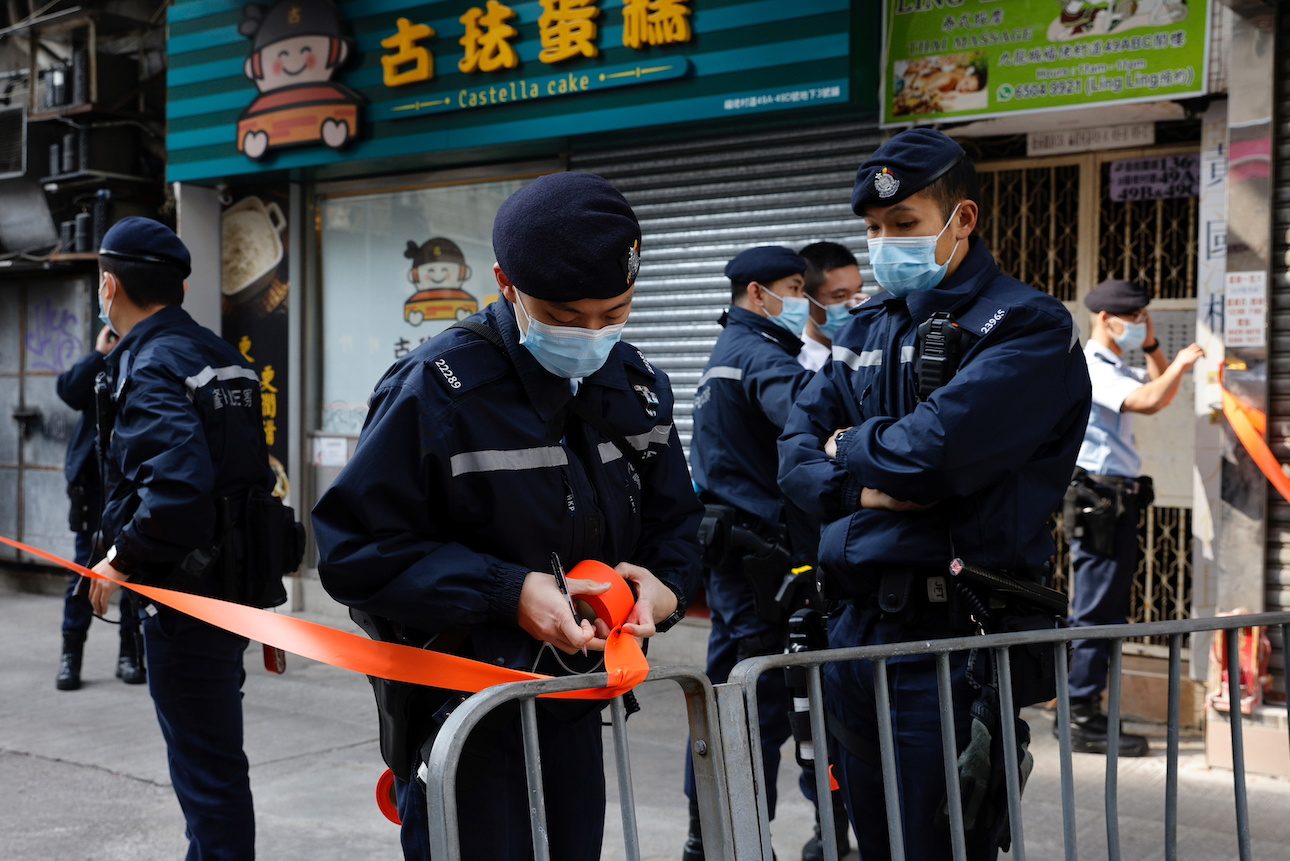 Police are seen outside the office of Daniel Wong Kwok-tung, a lawyer who tried to help the 12 people detained in mainland China, in Hong Kong, China January 14, 2021.

Facebook Twitter Copy URL
Copied
All those sanctioned are associated with 'developing, adopting, or implementing the (Hong Kong's) National Security Law.' The sanctions require the freezing of US-linked assets of those targeted.

The United States announced sanctions on Friday against six Hong Kong or Chinese officials it blamed for implementing a new security law in Hong Kong, following the mass arrests of pro-democracy activists this month.

Hong Kong police arrested 53 people on January 5 in the biggest crackdown on the democracy movement since China last year imposed a security law which opponents say is aimed at quashing dissent in the former British colony.

“This action by Hong Kong authorities is yet another stark example of Hong Kong’s freedoms and democratic processes being fundamentally undermined,” U.S. Secretary of State Mike Pompeo said in a statement.

Pompeo said 13 former Legislative Council members, an American lawyer and a former law professor were among those reportedly detained before being released on bail. He called for the freeing of all those held under the security law.

The sanctions require the freezing of US-linked assets of those targeted. China’s Washington embassy did not immediately respond to a request for comment.

Pompeo warned last week of fresh sanctions in response to the arrests. That warning came a day after supporters of President Donald Trump stormed Congress in a bid to overturn his November election defeat, prompting China’s state media to accuse US politicians of “double standards.”

Pompeo also said last week that Washington would explore restrictions against the Hong Kong Economic and Trade Office in the United States, but Friday’s announcement made no mention of this.

Friday’s action comes less than a week before Trump leaves office to be succeeded by Democrat Joe Biden. It was the latest in a series of steps targeting China, which analysts see as a bid driven by Pompeo to lock in a tough approach to Beijing.

Trump has pursued hard-line policies toward China on issues ranging from trade to espionage and the coronavirus. Relations plummeted to their worst level in decades when he ramped up rhetoric in his unsuccessful re-election campaign.

Trump’s administration has already imposed sanctions on Chinese officials over the crackdown in Hong Kong and last July declared an end to the territory’s privileged economic status under U.S. law.

It took another swipe at China on Thursday, imposing sanctions on officials and big Chinese companies for alleged misdeeds in the South China Sea and imposing an investment ban on nine more firms.

Last Saturday, Pompeo said he was lifting restrictions on contacts between US officials and counterparts in Taiwan. The move greatly angered Beijing, which considers the island a renegade province. – Rappler.com