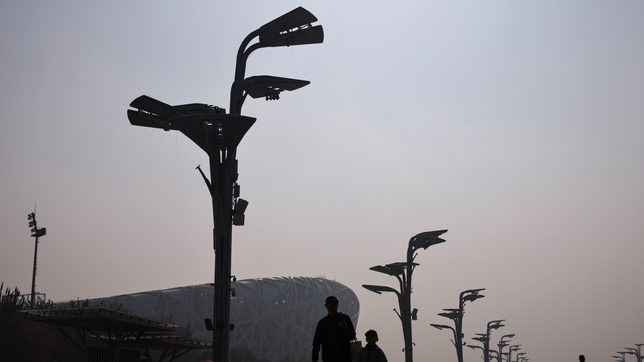 People walk past the National Stadium or Bird's Nest, the scheduled venue for the opening ceremony of the Beijing 2022 Winter Olympics, in Beijing, China, November 3, 2021.

Visibility in parts of Beijing was less than 200 meters (219 yards) on Friday, November 5, as heavy pollution shrouded the Chinese capital, forcing the closure of some highways.

Beijing issued its first heavy pollution alert for the fall and winter on Thursday, requiring the suspension of some outdoor construction, factory operations and outdoor school activities.

Visibility has been severely limited with the top of the city’s tallest buildings vanishing in the haze.

The heavily industrialized Beijing-Tianjin-Hebei region often suffers from heavy smog in the fall and winter, especially on days without wind.

A cold wave arriving from Siberia over the weekend is expected to disperse the pollution.

China aims to cut concentrations of hazardous, small airborne particles known as PM2.5 by an average of 4% year on year in main cities this winter, the environment ministry said last month.

The PM2.5 level in urban areas reached as high as 234 micrograms per cubic meter on Friday, according to the US Embassy in Beijing, indicating very unhealthy air.

China’s overall 2021-22 winter campaign against pollution will be waged in as many as 64 cities throughout the industrialized, smog-prone north, the ministry said in September.

China is due to host the Winter Olympics in Beijing and the nearby city of Zhangjiakou on February 4-20. – Rappler.com