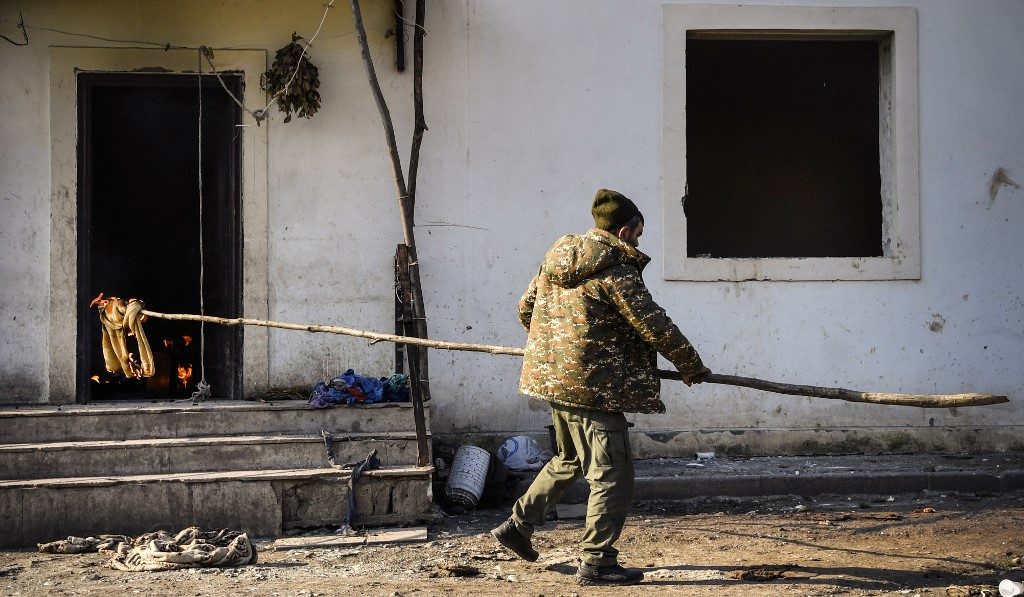 THE BURN. A resident sets fire to his home in the village of Charektar outside the town of Kalbajar on November 14, 2020, during the military conflict between Armenia and Azerbaijan over the breakaway region of Nagorno-Karabakh.

Facebook Twitter Copy URL
Copied
'Everybody is going to burn down their house today… We were given until midnight to leave,' says one resident

Villagers outside of Nagorno-Karabakh set their houses on fire Saturday, November 14, before fleeing to Armenia ahead of a weekend deadline that will see disputed territory handed over to Azerbaijan as part of a peace agreement.

Residents of the Kalbajar district in Azerbaijan that was controlled by Armenian separatists for decades began a mass exodus this week after it was announced Azerbaijan would regain control on Sunday, November 15.

Fighting between the separatists backed by Armenian troops and the Azerbaijan army erupted over the Nagorno-Karabakh breakaway region in late September and raged for 6 weeks.

Armenia on Saturday said that 2,317 of its fighters were killed in the clashes, an increase of nearly 1,000 deaths compared to the last confirmed death toll among Armenian fighters.

Azerbaijan has not revealed its military casualties and the real toll after weeks of fighting is expected to be much higher.

Russian President Vladimir Putin this week said the number of fatalities was higher than 4,000 and that tens of thousands of people had been forced to flee their homes.

In the village of Charektar, on the border with the neighboring district of Martakert which is to remain under Armenian control, at least 6 houses were on fire Saturday morning with thick plumes of smoke rising over the valley, an Agence France-Presse journalist saw.

“This is my house, I can’t leave it to the Turks,” as Azerbaijanis are often called by Armenians, said one resident as he threw burning wooden planks and rags soaked in gasoline into a completely empty house.

“Everybody is going to burn down their house today… We were given until midnight to leave,” he said.

“We also moved our parents’ graves, the Azerbaijanis will take great pleasure in desecrating our graves. It’s unbearable,” he added.

On Friday, November 13, at least 10 houses were burned in and around Charektar.

The ex-Soviet rivals agreed to end hostilities earlier this week after previous efforts by Russia, France and the United States to get a ceasefire fell through.

A key part of the peace deal includes Armenia’s return of Kalbajar, as well as the Aghdam district by November 20 and the Lachin district by December 1, which have been held by Armenians since a devastating war in the 1990s.

The two sides will maintain positions in the territories they currently hold, a significant gain for Azerbaijan after it reclaimed some 15% to 20% of lost territory including the key town of Shusha.

Russian peacekeepers began deploying to Nagorno-Karabakh on Wednesday as part of the terms of the accord and took control of a key transport artery connecting Armenia to the disputed province.

Russian military officials said the mission consisting of nearly 2,000 troops would put in place 16 observation posts in mountainous Nagorno-Karabakh and along the Lachin corridor.

Azerbaijani President Ilham Aliyev on Wednesday, November 11, accused Armenians of destroying “99% of the liberated territory” including hospitals, houses and monuments, adding that he wanted Armenia to pay compensation.

Thousands of people converged on the streets of Yerevan in demonstrations this week, while protesters stormed and ransacked government buildings, demanding Pashinyan’s resignation. – Rappler.com