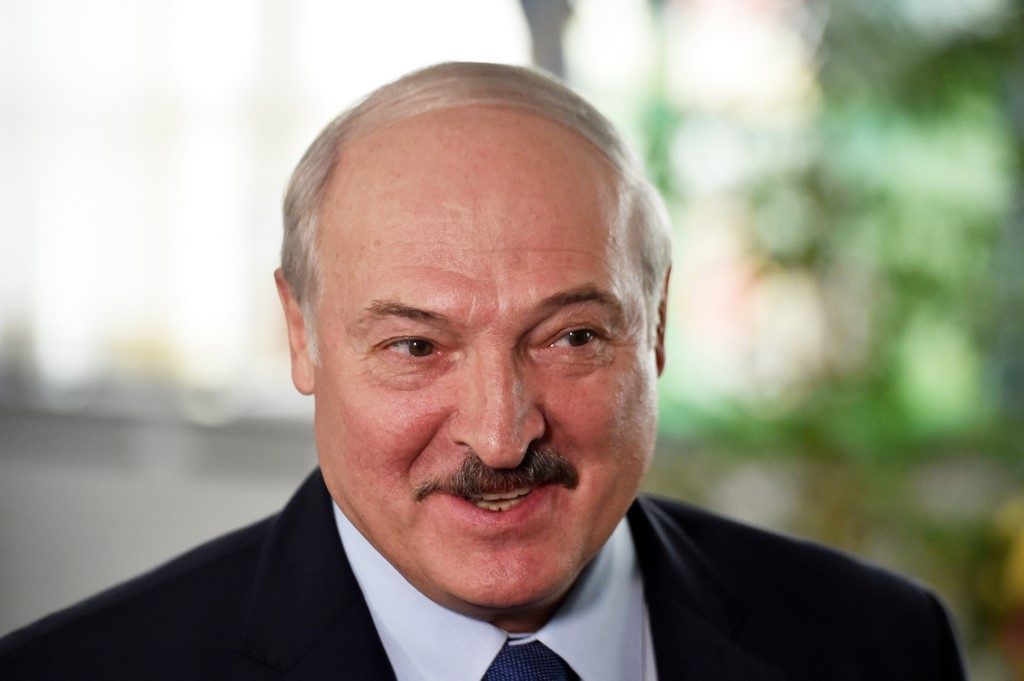 Belarus' President Alexander Lukashenko reacts as he votes at a polling station during the presidential election in Minsk on August 9, 2020. (Photo by Sergei GAPON / POOL / AFP)

Tikhanovskaya won 9.9%, while 3 other candidates each won less than 2%.

“The authorities have used force against their citizens, who are demanding change in the country. We must support the Belarusian people in their quest for freedom,” Polish Prime Minister Mateusz Morawiecki said in a statement.

Tikhanovskaya, a 37-year-old stay-at-home mother and political novice, galvanized the opposition during the election campaign, attracting tens of thousands of supporters to the ex-Soviet country’s biggest demonstrations in years.

Thousands took to the streets of Minsk and other cities on Sunday night to denounce the result, sparking clashes with police that Viasna said led to more than 300 arrests.

Shocking images released by pro-opposition media and posted online showed police firing stun grenades and rubber bullets into the crowds and a police van ramming into the demonstration and running down a protester.

Young protesters were seen covered in blood, lying immobile on the ground or being dragged away by police.

‘Mockery of our people’

Viasna said one protester had died after suffering a “traumatic head injury… as a result of being run over by a police vehicle.”

It said dozens of protesters were injured including at least 10 who had to be taken to hospitals.

An interior ministry spokeswoman denied there had been any deaths.

The Belarusian Investigative Committee launched a criminal probe on charges of organizing and participating in “mass unrest” – punishable by jail terms of 8 to 15 years.

Alexander, a 35-year-old protester in Minsk, accused Lukashenko of blatantly rigging the vote.

“I came out to protest because the country needs a change in power,” he told Agence France-Presse. “This is a crime, a mockery of our people.”

In a news conference after polls closed Tikhanovskaya said she did not trust the results.

“I believe my eyes, and I see that the majority is with us,” she said. “We have already won, because we have overcome our fear, our apathy and our indifference.”

She also called on members of law enforcement to stop using force.

Her ally, Maria Kolesnikova, said the government was “incapable of running the country” and an “unprecedented” political crisis was setting in.

Tikhanovskaya decided to run for president after the authorities jailed her husband, popular blogger Sergei Tikhanovsky, and barred him from running.

On Sunday afternoon, huge queues formed outside polling stations in Minsk and other cities, after Tikhanovskaya urged her supporters to vote late to give authorities less chance to falsify the election.

Many wore white bracelets that have become a symbol of the opposition.

Tikhanovskaya said that if she won she would release political prisoners and call fresh elections to include the entire opposition.

Lukashenko has sought to boost his support by warning of outside threats and raising the specter of violent mobs.

Authorities have detained 33 Russians, describing them as mercenaries sent to destabilize the vote. – Rappler.com