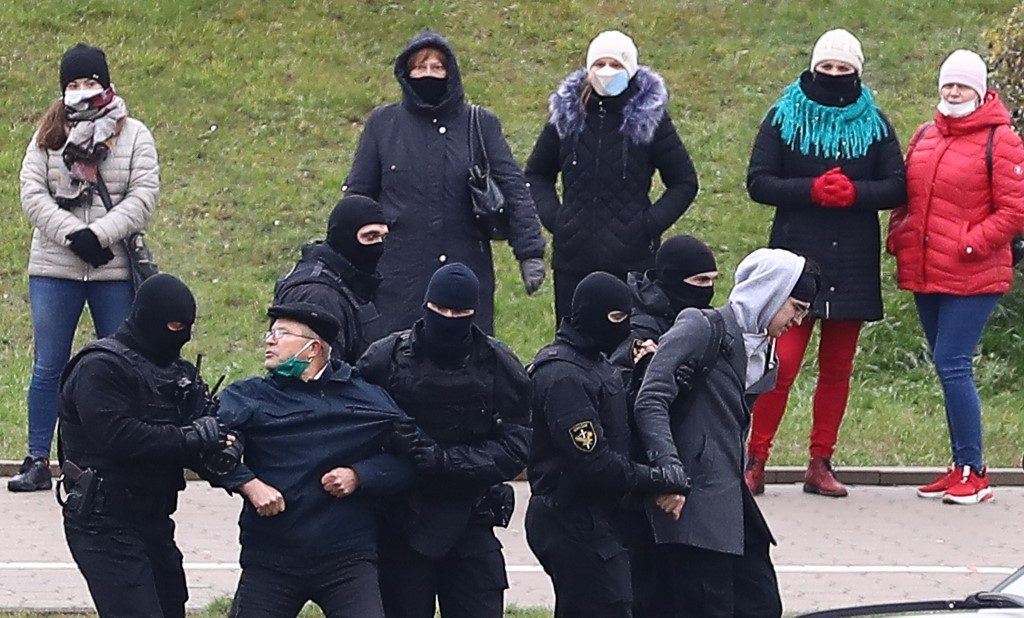 PROTESTS. Law enforcement officers detain opposition supporters during a rally to protest against the Belarus presidential election results in Minsk, on November 15, 2020.

Belarusians took to the streets of the capital Minsk on Sunday, November 15, in a fresh demonstration against strongman leader Alexander Lukashenko as anger mounted over the recent death of an opposition activist.

Some 15 metro stations were closed and mobile internet access was limited, an Agence France-Presse journalist reported.

Tens of thousands have taken to the streets of cities throughout Belarus every weekend since August 9 when Lukashenko claimed a 6th presidential term in elections that his critics and Western countries said were rigged.

The EU has slapped sanctions on officials in the authoritarian country for rigging the vote and waging a brutal crackdown on post-vote demonstrations that led to mass arrests and allegations of torture and abuse at the hands of the security services.

Sunday’s rally comes after thousands of demonstrators turned out in Minsk Friday to mourn the death of a protester who was pronounced dead one day after police arrested him.

Roman Bondarenko, 31, died in Minsk after police arrested him following a dispute in a city square that has become a regular meeting place for the opposition.

He was arrested by police on Wednesday after an altercation between residents and masked men who removed red and white ribbons, the colours of the opposition, hung in a building courtyard in Minsk.

Bondarenko was pronounced dead on Thursday after suffering brain damage, triggering a wave of outrage among the Belarusian opposition, who believe Lukashenko’s security forces are ultimately responsible.

Exiled opposition leader Svetlana Tikhanovskaya described the former soldier Bondarenko as a “man who was killed because he wanted to live in a free country”.

On Sunday, she described the crackdown on protesters with “gas, grenades and firearms” as “devastating” and called for international support for the demonstrators.

“We ask our allies to stand up for the Belarusian people and human rights. We need a humanitarian corridor for the injured, support for the media, international investigation of crimes,” she wrote on Twitter.

Lukashenko said Friday he had asked investigators to probe the incident “honestly and objectively.”

At least 4 people have died in demonstrations against Lukashenko since August and the EU on Friday condemned Bondarenko’s death saying it could warrant further sanctions.

Lukashenko, who has the firm backing of longstanding ally Russian President Vladimir Putin, has refused to stand down and instead suggests reforms to the constitution to placate the opposition. – Rappler.com